In the agenda of this extraordinary session of the Plenary, the proposal of eight members to address the European Commission to report on the agreement approved on June 27 by the Governing Chamber of the Supreme Court has been included. 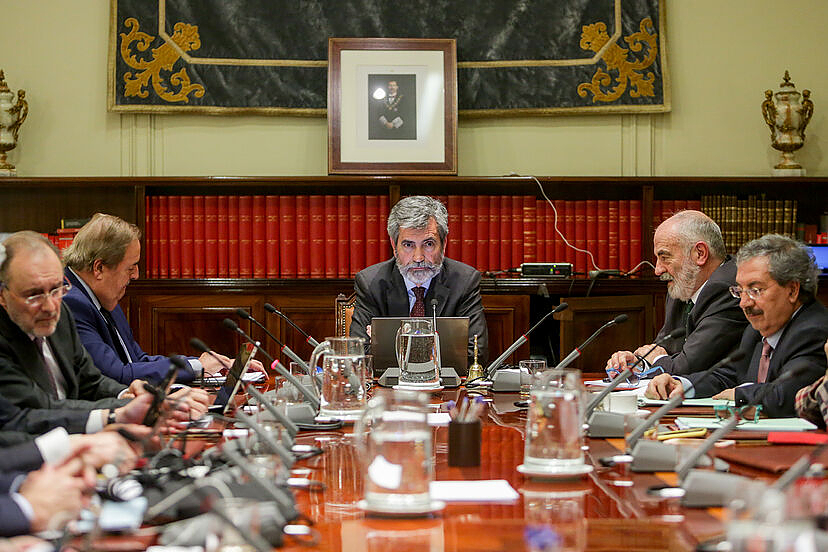 In the agenda of this extraordinary session of the Plenary, the proposal of eight members to address the European Commission to report on the agreement approved on June 27 by the Governing Chamber of the Supreme Court has been included.

The Plenary of the CGPJ will meet next Monday to decide its response to the legal reforms that have limited it from making appointments: the last one, the legislative initiative of the socialist parliamentary group to overcome the legal impediment imposed on this body to make appointments while in office and thus be able to appoint two magistrates of the TC.

In this way, the agenda of this extraordinary session of the Plenary has included the proposal of eight members to address the European Commission to report on this new legislative initiative and the agreement approved on June 27 by the Chamber of Government of the Supreme Court.

In said agreement, the CGPJ is demanded to transmit to the Congress of Deputies and the Senate its "deep concern" about the lack of renewal of the Council and the legal impossibility of making appointments, and that "they are creating a situation in the high court that, If it continues, it will be unsustainable."

Initially, this meeting of the Plenary Session of the General Council of the Judiciary was going to be held on June 30, but it had to be suspended because one of its members, Victoria Cinto Lapuente, died that same morning in San Sebastián at 63 years old.

Now, the president of the CGPJ, Carlos Lesmes, has resumed that plenary call for next Monday, July 11 at 5 in the afternoon and will proceed to assess the proposal of those eight members, of a conservative nature, which also includes the possibility of request Congress to obtain a report from the governing body of the judges on the reform proposed by the socialist parliamentary group in order to appoint two magistrates of the Constitutional Court.

The proposal aims to agree to return to the CGPJ "fully" the powers for discretionary judicial and governmental-judicial appointments, as well as address the European Commission to report on the aforementioned bill.

The legislative initiative of the PSOE aims to circumvent the impediment imposed on the CGPJ to make appointments while in office, to only be able to appoint those two magistrates of the TC.

An obstacle to appointments that was promoted at the time also at the initiative of the Socialists to force the renewal of this body that has already lasted three years and six months, and which is the one that has also been questioned by the Governing Chamber of the Supreme Court in the writing that the CGPJ will also see on Monday.

The members who have addressed this matter to the Plenary recognize in their proposal that although the report they ask to address to Congress is not considered mandatory when it comes to bills, they maintain that European jurisprudence "imposes" that when these refer "to the nuclear aspects of the status of the members of the Judiciary or that affect the status or functions of the members of the governing body of the Judiciary, must be processed hearing all the sectors involved.

According to these members, the proposed legislative initiative "seeks to reform LO 4/2021, of March 29, in order to enable the CGPJ to propose the appointment of two magistrates of the Constitutional Court", and with it and "as can be read in the statement of reasons", to avoid "the difficulties that the current text entails for the renewal of the constitutional bodies", they explain.

A justification that they consider "contradictory and incoherent" and they argue: "the Court of Guarantees is as much a Constitutional Body as are the Courts and Tribunals, served by judges and magistrates who are members of the Judicial Power" whose "superior body, in all orders, is the Supreme Court".