The rebirth of the soldier drama

Can there be too much Star Wars? With the second season of the animated series "The Bad Batch", Disney Plus is bringing the next series of stories from the universe to Lucas right at the beginning of the year - "The Mandalorian", "Ahsoka", "The Acolyte" and "Skeleton Crew" will at least follow. 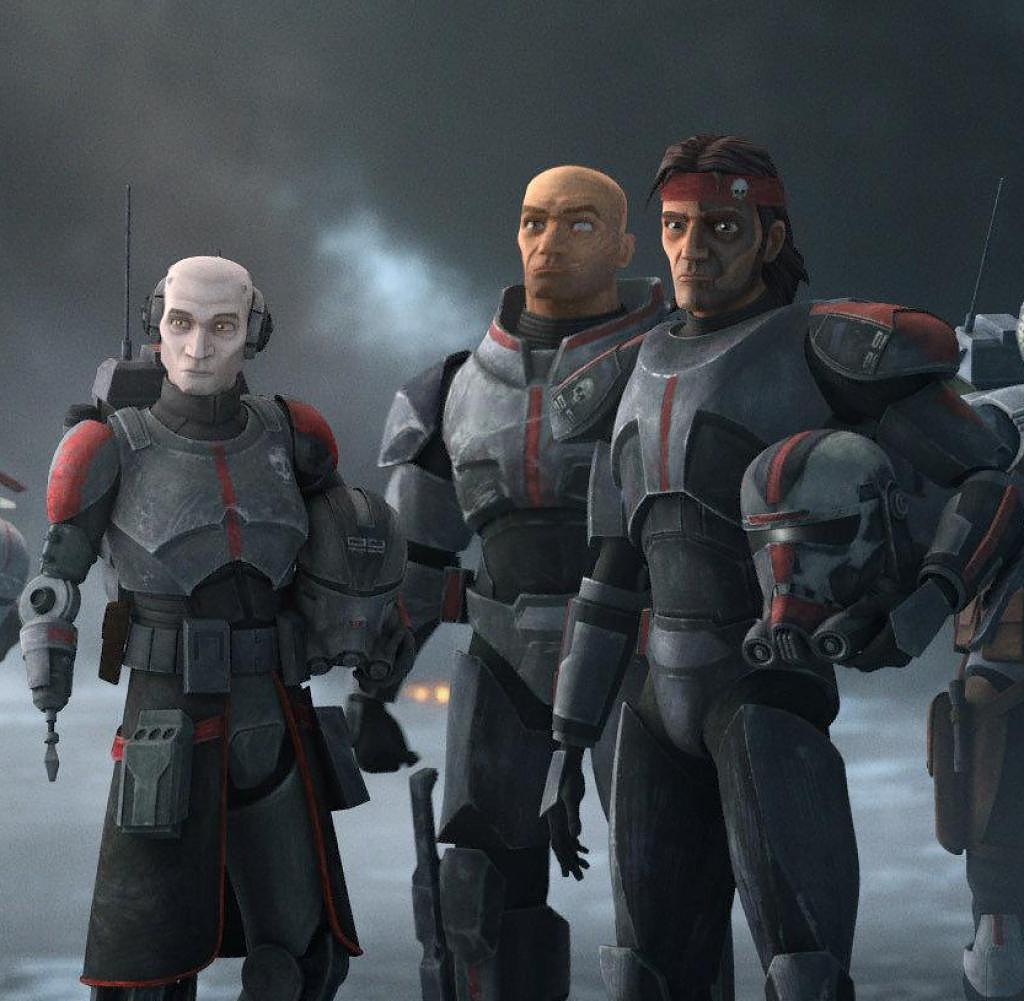 Can there be too much Star Wars? With the second season of the animated series "The Bad Batch", Disney Plus is bringing the next series of stories from the universe to Lucas right at the beginning of the year - "The Mandalorian", "Ahsoka", "The Acolyte" and "Skeleton Crew" will at least follow.

Last year there were four new "Star Wars" series on the streaming portal. But that's not overkill, it's a blessing. The Bad Batch 2 is a smart and important series, way better than the first season.

Only the animation style, which is a bit more video game-like than The Clone Wars, has to be dealt with. But then the series leads deep into one of the core themes of the "Star Wars" mythology: the conflict of loyalties.

A genre is revived here that seemed to have died out for a long time - because it is quite delicate: the soldier drama. In a real setting, mostly World War II, this type of film has many pitfalls.

The "Steiner" series is a good example of this. Could there have been good Wehrmacht soldiers despite the crimes of Hitler's army? tricky.

The entire saga, from cinema to TV to comics, has come up with two breathtaking twists in which the story is completely rotated from left to right. In "The Empire Strikes Back", the second part in terms of appearance chronology, Darth Vader revealed that he is the father of the main hero Luke Skywalker. The character changed immediately - the one-dimensional villain became a character with a tale of woe, with at least perceived positive elements.

The three prequels are about how Vader became what he was. But its most shattering turning point was “Order 66”. With this programmed secret order, Sheev Palpatine used the clone army against the Jedi, and from one second to the next, comrades in arms became bitter enemies.

In the "Jedi Purge" almost all light warriors were destroyed. The beginning of the empire, which Palpatine, who had long masqueraded as a Democrat and nudged the good but weak Republicans, now led as Emperor.

Just as Vader's revelation triggered a fundamental conflict of loyalties in his son Luke (which ultimately led to his father's redemption), not all, but some units of the post-Order 66 super-soldier army faced a moral dilemma. After years of war together against an enemy that was no longer there (the Separatist robot army), they were to pursue and kill their former commanders and companions, the Jedi.

It's the soldier's dilemma. As old as mankind. Which is more important - the command or one's own conscience? Most clones had an implanted chip preventing them from having these thoughts, but not all.

That's basically what The Bad Batch is about. A group of five (with a clone girl sidekick) misfit clones are unchipped and defect from the service of the Empire. Except for one member. The ice-cold CT-9904 ("Crosshair") betrays his comrades and remains (at least in the first four episodes watched so far) fully committed to his oath of service (here programming). Other clones, like CC-2224 ("Cody") are still struggling with themselves and their conscience.

One of the key factors behind the incredible success of "Star Wars" is that it's easy to underestimate the franchise, dismissing it as "fantasy" or even "fairy tale". In fact, however, elementary things are being negotiated in the TV extensions in particular, the science fiction setting is only a (spectacular!) backdrop - just as Richard Wagner was never concerned with a story of the gods in "The Ring", and his cycle is wonderfully transferred to other spheres leaves.

"Andor", perhaps the best "Star Wars" variant from the past year, has proven this impressively. There, the mythological background of the franchise was completely dispensed with.

No Jedis, no Force, no lightsabers. It was about everyday people who suddenly found themselves in a dictatorship and the moment when they personally discovered for themselves that they had to resist injustice.

"The Bad Batch 2" now plays through how the change in the political system affects the military. The clones – humans manufactured in identical masses as war material – are representatives for all soldiers in the world. They are somewhere between the Separatist robots and the Empire's recruited stormtroopers.

“Do you know what makes us different from battle droids?” one clone asks a second clone, who reduces his self-image to “We are soldiers” and immediately answers his own question: “We make our own decisions. And we are responsible for it.”

For this type of machine people, this is the moment of enlightenment. The questions of what to do with the hundreds of thousands of clones that are to be replaced by human soldiers, why the empire is relying on uncloned troops at all (tip: follow the money) and what is left of Kamino are dealt with and further clarified.

The key to the totally failed Snoke/Palpatine assumption of the sequels lies in "The Bad Batch" - the series will have linked and saved more in the end than "The Mandalorian" or "Kenobi".

The series is dark, brutal in its depiction of the fights and cynical at times. Thankfully, Dave Filoni, whose The Book of Boba Fett has been unfairly and ignorantly discredited as a spectacular homage to the childhood Star Wars toy, has abandoned the mission-style ordering of episodes in favor of longer storylines.

There's no more in-out in this grown-up war drama, which is perhaps the least child-friendly incarnation of Star Wars aside from Andor. If the dialogues in the Filoni works were often criticized recently, here he is again up to par.

With just a few sentences (which, of course, will not be revealed), he pays into Palpatine's manipulative genius, for example, who is simply no match for the good, as the Bad Batch has to find out.

From time to time, Filoni also allows himself a touch of humor by resurrecting two of the most famous movie monsters in history. And, yes, the soundtrack is pleasantly reminiscent of Vangelis' "Blade Runner" stroke of genius.

Most importantly, The Bad Batch is absolutely Star Wars. The myriad references to previous films and series (a race, the Star Destroyer over Desix like the one over Jeddah in Rogue One, and the return of a hairy acquaintance - but not the one you're thinking of now) make the 18 episodes a feast for the fans who have always seen more in "Star Wars" than the "Once upon a time..." in the title scroll of "Star Wars" would suggest.