A common problem in today's theater is how to get the product to the demure audience. 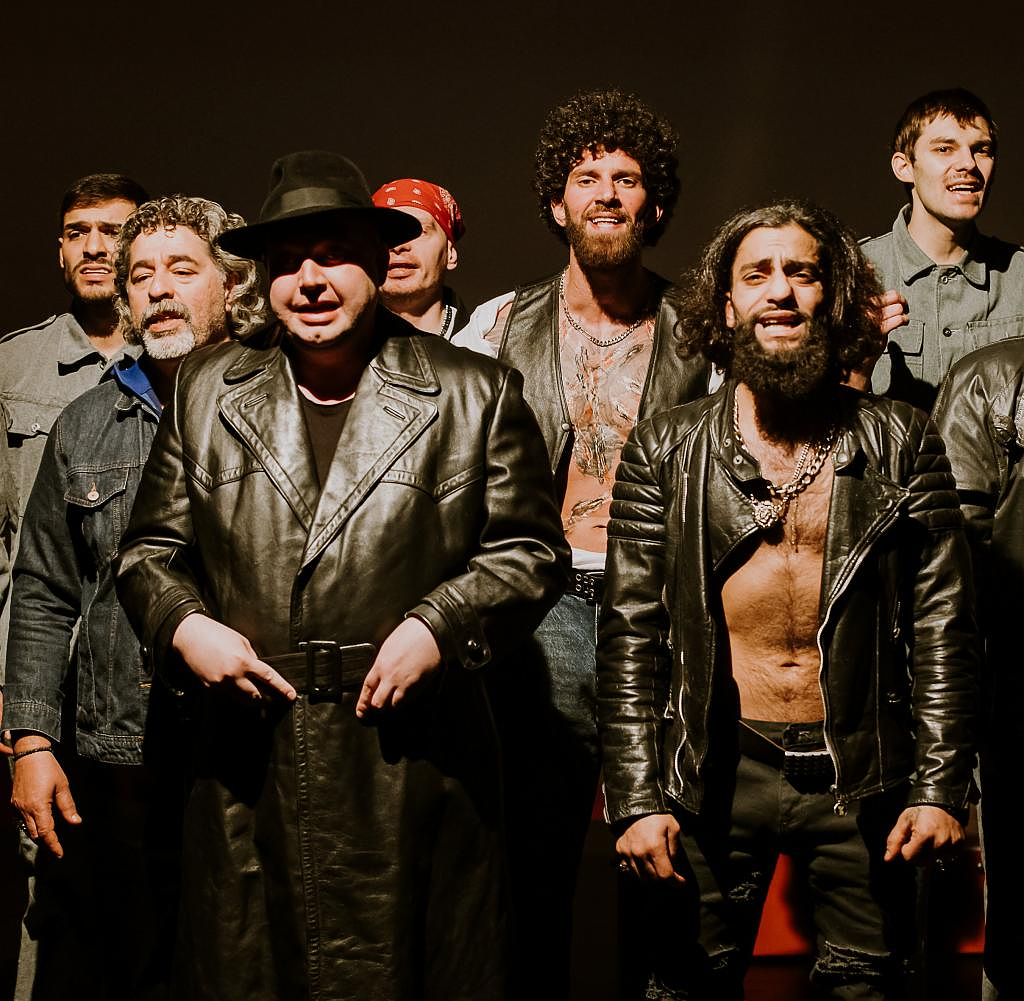 A common problem in today's theater is how to get the product to the demure audience. Does the moral sermon still catch on? Is it the appropriate antidote to postmodern self-referentiality, or just its continuation by other means? AufBruch has little to do with such theatrical problems. This is solely due to the location: the prison. And the players: the inmates. The Freiraum Theater has yet to assert itself in a closed system. The power that arises from this is unparalleled, an exceptional case in the theatre.

For 25 years, the aufBruch project has been making theater in Berlin prisons, including the Tegel and Plötzensee prisons and various juvenile detention centers. Everything that has been laboriously worked out, the trust of the leaders, employees and above all inmates, has been shaken in the past two years. The prisons were sealed off because of Corona. This did not stop the virus, in contrast to projects like aufBruch. Now you're approaching again.

Holger Syrbe, Sibylle Arndt and Peter Atanassow are sitting in a small shop in Prenzlauer Berg. It's cloudy and rainy outside, cramped and cozy inside. Sit in the back of the kitchen to talk. Strong coffee is available black, but buying milk is not at the top of the priority list right now. At this time the last performances of "Romulus the Great" are running, with ex-convicts, freedmen and actors on an open-air stage. When the rain increases, the plastic rain parkas no longer help either. Cancel? Would be a disaster with the few performances.

Since the beginning of October, the rehearsals for the new play: "The Just" by Albert Camus have been running in the Plötzensee prison. It's about humanism and terror - and about prison. Working on a theatrical production in prison is anything but easy, the three of them can report from years of experience. It's always a gamble. "Motivation is the main work," Syrbe said. Will all players stay? Will the performance be successful in front of families and friends, in front of guests and critics? Everything is going well so far. The premiere of "The Just Ones" is on Wednesday, November 30th.

Holger Syrbe has been there from the beginning, he still designs the stages today. In 1997 the first piece was shown in the JVA Tegel: "Stein

In the 1990s, the legendary homeless ensemble Ratten 07, which was still performing at the Volksbühne am Rosa-Luxemburg-Platz, caused a sensation. It was not uncommon for one of the performers to be picked up by the police during rehearsal and sent to jail, or for others to be picked up from custody. This is how Syrbe came into contact with the prison world. And she wouldn't let him go.

Prison theater can be found all over the world. In 1957 Herbert Blau performed with a group of actors in the notorious San Quentin State Prison, where Johnny Cash would also give a concert years later. On the schedule was Samuel Beckett's "Waiting for Godot". There were 1,400 people in the audience, most of whom had been convicted of serious crimes. Surprisingly, the play was very well received. Surprised? Maybe not. The waiting and the motionlessness reflect everyday life in prison.

In the 1970s, the idea came up that theater should not only be made for the inmates, but with them. Armando Punzo with his Compagnia della Fortezza of the Volterra prison-fortress is a pioneer of this development, which also finds echoes in France, Spain, Great Britain and Scandinavia. But in Germany it remains with small, mostly one-off projects. With AufBruch a new chapter begins, there is hardly any previous experience. You have to work through everything anew and overcome fears of contact.

Beckett can also be seen in Berlin in 2000: "Endspiel" in the Tegel prison. The rehearsal diary records the following dialogue between an actor and the dramaturge: "Did you write that?" - "No, Beckett." - "Well, let him come!" - "He's already dead." - "Is he lucky The tough guys in jail, it's not just a cliché, it's a reality to deal with. On stage it's refreshingly rough and excitingly raw.

The rehearsal diary was kept by Sibylle Arndt, who is now the organizational heart and brain of aufBruch. She keeps everything together, makes the arrangements with the prisons, accompanies the rehearsals, invites the press and handles the ticket service for the performances. It has become a life's work for her, she didn't know that either when she started a production more than 20 years ago. "At the first rehearsal, I realized that this is not normal theatre," she says. Another one that hasn't let go.

The third in the group is Peter Atanassow. He trained as a carpenter, then as an actor. In Mallorca he played in a daily soap for television. But once he was a part of aufBruch, he couldn't let it go either. The prison reminds him of the barracks of his time with the NVA, he says, and he knows the male and the military well. At first he still thought of finding the disenfranchised and downtrodden in prison, the new revolutionary subject. He promptly lost the illusion. "It's only people who are concerned about their advantage, who exclude and step down," he says. But the fascination has remained.

Atanassow has been directing aufBruch for 20 years now, succeeding Roland Brus. Atanasov appreciates the strict artistic form, powerful choirs, for example. The influence of Einar Schleef cannot be overlooked, whose staging of Elfriede Jelinek's “Sportstück” at the Vienna Burgtheater had a great impact on Atanassow. His first work for aufBruch was Peter Handke's "Public Insult". And the insulted audience? None other than the participants of the German Lawyers' Conference, which met in Berlin in autumn 2002. What a constellation!

The convicts play a play for those who judge, in the protective as-if of the theater it is possible, the lawyers were enthusiastic. The situation of the inmates is often reflected in the plays by aufBruch, but always artistically. The hesitation before the crime of the Danish prince in Shakespeare's "Hamlet", the man who was cast out with a wound in Heiner Müller's "Philoktetes", the prisoner within their walls in "Die Festung" by Werner Buhss, the socially rejected man in Georg Büchner's "Woyzeck"; the general human aspect of these subjects meets the concrete reality of the players.

There are three principles at aufBruch: It doesn't matter whether it's manslaughter or fraud, everyone can take part. Secondly, as long as they observe: no violence. And thirdly: One makes art, not therapy. Although, as the prison management has to acknowledge, despite initial concerns, therapeutic effects are inevitable. But they arise through the artistic, through the back door, so to speak, as Atanasov emphasizes. That is the claim that you work towards – with success.

The famous actor Edgar Selge, himself the son of a director of a juvenile detention center, was "downright blown away" by the performance of Shakespeare's "The Tempest" in the prison in Tegel, as he enthusiastically explained. Over the years, aufBruch has constantly expanded its own program, with "Parsifal" and "Fidelio" operas were added in 2019 and 2020, with a reduced musical cast.

With former prisoners, freedmen and volunteers, plays are realized outside the prison walls, in the Superior Court, on the Museum Island or on an overgrown open-air stage when it's not pouring rain. In Schleef's "The Actors", which is performed in the former Tempelhof Airport, the door of the monumental hangar is pushed aside for the finale and the view of the night sky is revealed. At the same time, the hapless Volksbühne director Chris Dercon peddled big announcements for the building, but he failed to pull off such a staging.

You can look up the history of aufBruch in a volume that has just been published by Alexander-Verlag. Thomas Aurin, theater photographer for Frank Castorf, among others, has accompanied aufBruch over the years, his photos are supplemented by texts, interviews and reviews, compiled by the editor Hans-Dieter Schütt, who himself worked as aufBruch dramaturge. It is an empathetic documentary that depicts prison theater as an experience and challenge for all sides and that confidently navigates past the cliffs of miserable voyeurism and social kitsch. The same applies here: It is an artistic documentation.

The book also contains wonderful finds such as the following: "Perhaps you have already heard that I was on the run for more than three months?" says a letter to aufBruch. "Unfortunately I can't play with Wallenstein, but I hope that you'll take me back next year anyway." You don't have to sugarcoat the prison system to realize that the insatiable urge for freedom finds a form in play, that art also forms a form of flight, but it cannot replace real life.

Holger Syrbe, Sibylle Arndt and Peter Atanassow are far from finished, at the moment it's time to start again after the difficulties that have been forced on you. Ten players have been found for “The Just Ones”, for aufBruch there is now a rather small group. It involves going to prison, knocking on cell doors, persuading inmates to take part, persuading them to stay, assigning roles, rehearsing lines, slowly and laboriously working out a staging; for the inmates everything after work.

Then the big day of the performance approaches, and the excitement mounts. Due to the extraordinary conditions, uncertainty remains until the end. Once, shortly before, one of the main actors was deported, even that can happen. One of the less beautiful moments. And the beautiful ones? When everything falls into place and your own expectations are exceeded. "One time we did 'Before the Dawn' where a character has an affair with the old alcoholic," says Atannazov. “With us, they shagged in the sink. Now the player's family was there, the women with headscarves. How would they find that? They fell away laughing.”

For the premiere, the audience gathers in front of the high walls and solid gates of the prison, the obligatory body searches follow, the walk through the facility, through the cell blocks, which the majority of the audience probably only knows from the film, countless doors are opened with the help of huge bunch of keys opened and closed again. Everything is regimented, something like theater seems almost impossible here.

When it's all over and you've had a few more minutes to talk to the cast, you can go back down that path; that's the key difference. Indoors and outdoors, they are two worlds that briefly touch, flashing brightly, sharply delineating everything in between. Anyone who wants to find out more about this world through theater should try aufBruch. It's always more interesting than the usual theatrical problems.

"The Righteous" premieres on November 30th in Plötzensee Prison. Information and maps are available here. The book AufBruch. The Berlin Prison Theater – A Portrait” has been published by Alexander-Verlag (edited by Hans-Dieter Schütt and photographed by Thomas Aurin, 416 pages, 30 euros).

‹ ›
Keywords:
TheaterGefängnisSubkulturBeckettSamuel
Your comment has been forwarded to the administrator for approval.×
Warning! Will constitute a criminal offense, illegal, threatening, offensive, insulting and swearing, derogatory, defamatory, vulgar, pornographic, indecent, personality rights, damaging or similar nature in the nature of all kinds of financial content, legal, criminal and administrative responsibility for the content of the sender member / members are belong.
Related News