War in Ukraine: After the massive Russian strikes, the G7 meets urgently

The Russian bombardments on a scale unmatched for months on kyiv and other cities in Ukraine will be at the center of the discussions of the members of the G7 on Tuesday, which British Prime Minister Liz Truss must call on not to "weak one iota ". 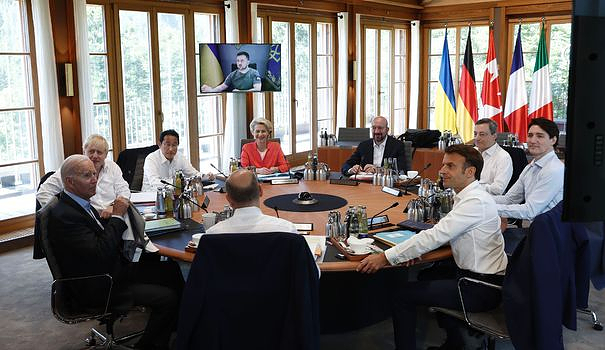 The Russian bombardments on a scale unmatched for months on kyiv and other cities in Ukraine will be at the center of the discussions of the members of the G7 on Tuesday, which British Prime Minister Liz Truss must call on not to "weak one iota ".

The member countries of the UN gathered Monday afternoon in the historic amphitheater of the General Assembly, in New York, to urgently debate a resolution condemning the annexation of Ukrainian regions by Moscow. With this text co-drafted by the European Union, presented by Ukraine and which could be put to the vote on Wednesday, Westerners hope to demonstrate that President Vladimir Putin's Russia is isolated on the international scene.

But it was Monday morning's deadly strikes that monopolized the session where the two warring countries crossed swords in an electric atmosphere. "Russia has once again proven that it is a terrorist state that must be deterred in the strongest possible way," insisted Ukrainian Ambassador to the UN Sergiy Kyslytsya. His Russian counterpart Vassili Nebenzia replied to him by comparing the kyiv regime to the "most scandalous of terrorist organizations", two days after the explosion of the Russian Crimean bridge. A "sabotage" according to Moscow.

Before the General Assembly, UN Secretary General Antonio Guterres, "deeply shocked", had denounced the Russian bombardments: "An unacceptable new escalation of the war" for which civilians "are paying the highest price".

Ukrainian President Volodymyr Zelensky is due to attend this emergency virtual meeting scheduled from 2 p.m. French time, Berlin said. Deadly Russian bombardments on a scale not seen in months hit Ukraine on Monday morning, leaving at least 11 dead and 89 injured, according to the latest police report, including five in kyiv, targeted for the first time since 26 June by missiles. "They are trying to destroy us all, to wipe us off the face of the Earth," Volodymyr Zelensky reacted on Monday morning as Russian missiles hit Ukrainian cities. But "Ukraine cannot be intimidated", he then launched in his evening speech, promising to "repair everything that has been destroyed".

These bombardments provoked indignation in the West. The European Union has considered that they are akin to "war crimes" for which those responsible will have to "account", calling on Belarus to "not be a party to the brutal aggression carried out by Russia". According to London, Liz Truss, head of government for a month, should declare that "no one wants peace more than Ukraine. And for our part, we must not falter one iota in our determination to help win".

Joe Biden promised Ukrainian President Volodymyr Zelensky on Monday "advanced systems" of air defense, after the deadly Russian bombardments - on a scale not seen in months - which hit kyiv and other cities in Ukraine.

US President Joe Biden condemned the "absolute brutality" of the Russian bombings and his Secretary of State Antony Blinken assured Ukraine of Washington's "support" after these "horrible strikes". According to a statement from the White House, the United States has promised "to continue to provide Ukraine with what it needs to defend itself, including advanced systems" of air defense. “Air defense is currently the number one priority of our defense cooperation,” the Ukrainian President stressed. Germany will also urgently deliver a long-promised first anti-aircraft defense system.

These "deliberate strikes by Russia on the whole of Ukrainian territory and against civilians is a profound change in the nature of this war", he said during the day during a trip to Mayenne, adding that he would bring together his diplomatic and military advisers concerned as soon as he returned to Paris to "take stock" of the situation.

The Elysée confirmed that a restricted Defense Council had been held for an hour and a half on Monday evening in the presence of the Ministers of Foreign Affairs Catherine Colonna and of the Armies Sébastien Lecornu. On this occasion, President Emmanuel Macron took "new measures to support Ukraine militarily and provide for the needs of its population".

More people will be forced to flee their homes in Ukraine, UN High Commissioner for Refugees Filippo Grandi warned on Monday, after Russian missiles rained down on kyiv and other Ukrainian cities. "The horror of what happened in Ukraine today... is inexcusable," the Italian diplomat told reporters. "The bombardment of civilians, houses [...], non-military infrastructure indiscriminately in many cities in Ukraine means that war is becoming more and more difficult for civilians," he said. he adds. "I fear that the events of the past few hours will cause new displacements".

Since Russia launched its full-scale invasion of Ukraine on February 24, more than 7.6 million Ukrainian refugees have been registered as refugees across Europe. According to the International Organization for Migration (IOM), nearly 7 million people have also been displaced inside the conflict-torn country.