Missile crisis: "We were going to end up in ashes", says a Cuban ex-soldier

This morning of October 27, 1962, the young soldier has finished his shift and is walking on an isolated beach in the town of Banes, in the province of Holguin (east), where his battalion is stationed. 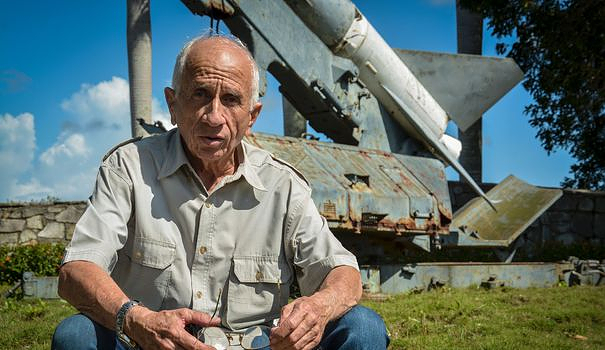 This morning of October 27, 1962, the young soldier has finished his shift and is walking on an isolated beach in the town of Banes, in the province of Holguin (east), where his battalion is stationed. He is barely 17 years old and has just enlisted in the Cuban army.

At the time of the explosion, "I didn't know what it was," the 77-year-old former soldier told AFP in front of a former Soviet missile launch pad turned into a monument in La Havana.

Then "an officer told us that an anti-aircraft battery operated by the Soviets had shot down a Yankee plane," continues the retiree who still resides in the province.

Five days earlier, US President John Kennedy had revealed evidence of a deployment of Soviet atomic missiles in Cuba, spotted as early as October 14.

These included 24 launch sites for the dreaded V-75 missiles.

On October 27, pushed by Fidel Castro, the Soviets had turned on their radars, unlike the previous days.

The Cuban leader was convinced of an imminent invasion and could no longer bear to see American aircraft violating Cuban airspace for low-altitude reconnaissance flights.

When the plane fell, "the reaction of the fighters" who had spent days "digging trenches, preparing World War II weapons" donated by Moscow and observing the "low-altitude flight" of American spy planes, "was enthusiasm, joy", recalls the former soldier.

However, the elimination of the U-2 and the death of its pilot, Major Rudolf Anderson, 35 - the only victim of this crisis - is indeed the most critical moment in the escalation between the United States and USSR.

"We were going to end up in ashes" because the "hawks" of the Pentagon "wanted Kennedy to immediately strike (with nuclear weapons) the anti-aircraft batteries and the Soviet missiles" positioned in Cuba, recalls Oscar Larralde.

The soldier later learned the details of the explosion. "The leader of the group, Ivan Guerchenov (...) asked his superiors for permission to shoot down the plane" which had just been detected by radar. He then "lost communication with the command" and "ordered to fire" two surface-to-air missiles which hit the aircraft.

"Anderson did not have time to do anything," explains Oscar Larralde who acknowledges that the event gave rise to several versions.

The previous night, however, hope for a way out of the crisis had reappeared. Soviet number one Nikita Khrushchev had made the secret offer to withdraw his missiles against the American promise not to invade Cuba.

He then made a public proposal to exchange the missiles in Cuba for the American rockets installed in Turkey.

But Kennedy was considering with his top advisers what response to give to Moscow when he was informed that the U-2 had not returned.

While Khrushchev had authorized self-defense, he had never ordered the firing of unarmed reconnaissance planes.

On both sides, we understand that the situation is spiraling more and more out of control and that we are dangerously approaching the point of no return.

A last chance meeting is organized between Robert Kennedy, Minister of Justice and brother of the President, and the Soviet ambassador Anatoly Dobrynine. A compromise is found, the crisis ends.

For Oscar Larralde, faced with the nuclear risk, there is no other choice but to dialogue: "It is important to negotiate now to guarantee world peace or humanity will continue to be entangled in the possibility of a new nuclear conflict," he said, referring to the war in Ukraine and the nuclear threat wielded by Moscow.

"At this very complicated moment, the USSR and the United States managed to start negotiations and a solution to the conflict was found," he recalls.