Macron pays homage to the Great Mosque of Paris, proof that one can "be French and Muslim" 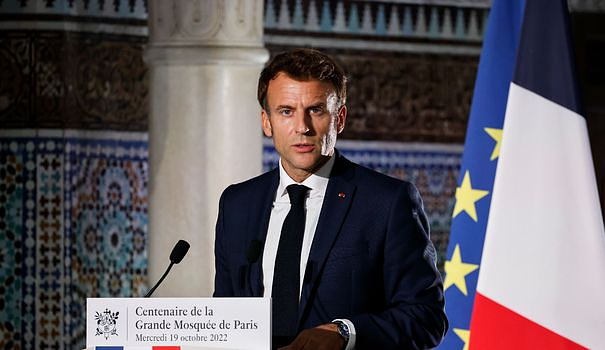 The first stone of the building was laid on October 19, 1922. An exhibition, which the President of the Republic visited, tells its story.

Referring to this "haven of peace (...) born of a storm of history", the Head of State recalled that the famous mosque of the capital was the fruit "of the recognition by the Third Republic of the place of Muslims in our society and their sacrifice" at the front during the First World War.

If "colonial and diplomatic interests" also justified its construction, by this "our nation affirmed in the eyes of the world that one could be French and Muslim", he added.

"The Great Mosque of Paris carries the possibility not only of an Islam in France, faithful to the values ​​of the Republic, but also of an Islam with France, which supports it, and even of an Islam of France, which makes it grow within it," insisted Emmanuel Macron.

He decorated with the insignia of officer of the Legion of Honor the rector of the mosque, Chems-Eddine Hafiz, whom he considered "as lucid" as himself about the common "enemies" of Islam and the Republic: "the separatisms which blind the believer", "radical Islamism composed of a tiny minority of deviants".

"We will not let the tear (...) create a gap of resentment and distrust vis-à-vis Muslims," ​​said the head of state. "There is not on one side the French and on the other the Muslims. We can be one and the other, harmoniously."

According to him, "to deny this compatibility between France and Islam is to bring water to the mill of separatism".

The opportunity for the president to defend his vision of secularism and his controversial law known as the fight against "separatism", criticized by defenders of public freedoms.

With its Hispano-Moorish style, its Andalusian-style gardens and patios, its zelliges and moucharabiehs and its 33-metre high minaret, the religious building near the Latin Quarter, flanked from the outset by a restaurant and a hammam, has become an emblematic building of the capital.