In Somalia, the government engaged in a "total war" against the Shebab

The Shebab, a group affiliated with Al-Qaeda, has been fighting the government since 2007 to establish Islamic law. 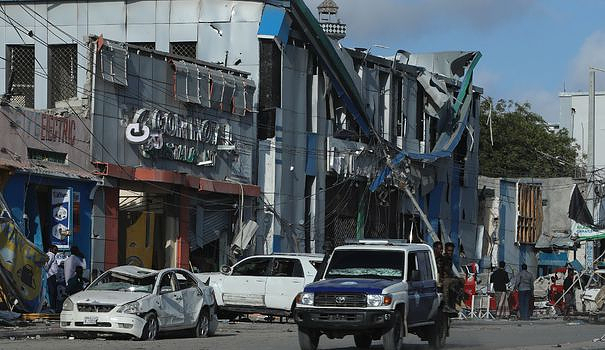 The Shebab, a group affiliated with Al-Qaeda, has been fighting the government since 2007 to establish Islamic law. Driven out of the main cities in 2011-2012, they remain firmly established in vast rural areas.

Since July, two clans in the regions of Galmudug and Hirshabelle, in central Somalia, have been fighting to free themselves from pressure from local Al-Shabaab.

The government decided to send the army at the beginning of September, including the "Danab" commandos trained by the American army, to support these clan militias baptized "macawisley" - from the name of the traditional sarong ("macawis") worn by some of these civilian fighters.

"The government wants to grasp the current dynamic and encourage this type of uprising in areas under Shebab control," said Omar Mahmood, researcher at the International Crisis Group.

The number of soldiers involved in this major offensive is not known. For the "macawisley", local sources mention 2,000 to 3,000 fighters. Shebab numbers are estimated at between 5,000 and 8,000 across the country.

With the support of American air strikes and logistical and artillery support from the African Union force (Atmis), these troops regained control of the province of Hiran and large areas of Middle Shabelle.

. What is the government's strategy?

In mid-July, the new president Hassan Cheikh Mohamoud had detailed a strategy on "three fronts": military, ideological and economic.

"Previous policies were militaristic: attack and destroy. But the Shebab problem is more than military," he explained.

His first action was the appointment as Minister of Religious Affairs of Muktar Robow, one of the founders of the movement he left in 2017. Since then, Robow and the government have been working to "take back the narrative of Islam from the shebab", referred to as "khawarij" ("renegades").

In an attempt to "close the financial taps" of the movement, the government also announced that any trade paying the "taxes" demanded by the Shebab would see its license revoked.

Its American ally announced to offer up to 10 million dollars for any information allowing "the disruption of the financial mechanisms".

"The government is trying to establish a climate of confidence in the population so that it stands up against the group. It is still difficult to measure the effects of these declarations", underlines Samira Gaid, of the Hiraal Institute specialized in questions of security.

. What is the reaction of the Shebab?

In the center of the country, the Shebab have lost ground. But they generally have long-term strategies, recalls Omar Mahmood: "Even if they lose in the short term, they will try to find ways to undermine the progress of the government in order to be able to come back".

They recently reinvested some localities abandoned by the federal troops in their advance.

At the same time, the group is carrying out a campaign of bloody attacks in cities.

On October 29, Somalia suffered its deadliest attack since 2017, with 121 dead and 333 injured in a double car bomb attack in Mogadishu.

If these bloody attacks are frequent with each change of administration, they also respond to an "existential" threat to the Shebab, underlines Samira Gaid: "They react strongly to repel it and dissuade other clans from joining the fight".

. Is a "liberation" of the country possible?

Hassan Cheikh Mohamoud said in mid-November that "going back or defeat is not an option". But the promised "liberation of the country" will be punctuated by major challenges.

History has shown that without authority, clan rivalries resurface and the Shebab return. Clashes between clans have recently been reported in some "liberated" areas.

Extending it to other regions will not be easy. The clans play a capital role in the current offensive but it is not certain that all will do the same, especially in the south, a historic Shebab stronghold.

For 15 years, all attempts to eliminate the Islamist group militarily have failed.

Hassan Cheikh Mohamoud said in July that "there are strong arguments" for negotiations. But "we are not currently in a position to negotiate with the Shebab. We will do so at the right time," he said.

For Samira Gaid, "it has always been clear to the government that a negotiation could only take place in a favorable position". The current offensive may help "give the advantage to the government before talks later."