The 22-year-old Iranian Kurd died on September 16, three days after she was arrested by the morality police for violating the Islamic Republic's strict dress code, which notably requires women to wear the veil. 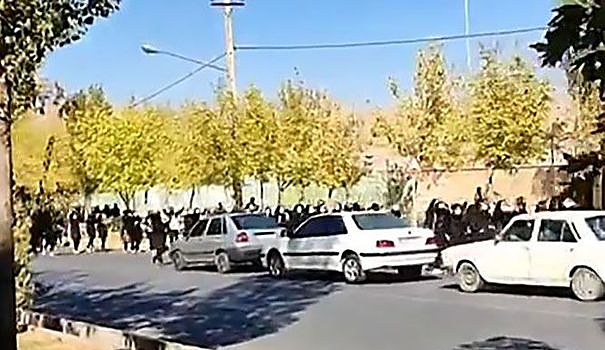 The 22-year-old Iranian Kurd died on September 16, three days after she was arrested by the morality police for violating the Islamic Republic's strict dress code, which notably requires women to wear the veil.

Anger erupted during his burial and spread across the country. The protests have become the largest in Iran since those in 2019 against rising gasoline prices.

Students gathered last weekend before being confronted by riot police who cornered them in an underground car park at the Sharif University of Technology in Tehran before arresting them.

Since then, schoolgirls across the country have taken over, adopting a variety of tactics, including removing their veils and shouting anti-conservative slogans.

In a video verified by AFP, young girls with unveiled heads chant "Death to the dictator" (reference to Supreme Leader Ali Khamenei) Monday in a school in Karaj, west of the capital Tehran. Another group of girls chants "Woman, life, freedom" while parading in a street.

"These are truly extraordinary scenes. If these demonstrations are to lead to anything, it will be thanks to the schoolgirls," said Esfandyar Batmanghelidj, of the information and analysis site Stock Exchange.

Other videos posted online show schoolgirls leaving classrooms to march through various locations around the city in flash protests to avoid detection. AFP was unable to independently verify these images.

Since the beginning of the protest movement, the Iranian regime has intensified its repression by arresting notorious supporters of the movement and imposing severe restrictions on access to social networks.

On the night of Tuesday to Wednesday, Iranian pop singer Shirvin Hajipour, arrested after his song in support of the protests went viral, was released on bail.

Meanwhile, Iranian judicial authorities have opened an investigation into the cause of death of a teenage girl, who was allegedly killed during a protest.

In addition, according to the NGO Iran Human Rights (IHR), at least 63 people were killed last week in Zahedan, in the south-east of Iran, a country with a Shiite majority, by the repression of demonstrations triggered by charges that a local police chief had raped a 15-year-old girl from the Baloch Sunni minority.

The violent crackdown on protests in Iran has prompted a wave of condemnation across the world, and rallies in support of Iranian women have since been held in dozens of countries.

After the announcement of sanctions by the United States and Canada, the European Union announced on Tuesday its intention to in turn sanction Iran with "restrictive measures" to protest against "the way in which the Iranian security forces reacted to the protests".

Iran has repeatedly accused outside forces of stoking the protests and said last week that nine foreign nationals -- including from France, Germany, Italy, Poland and the Netherlands -- had been arrested.

In his first public comments on the death of Mahsa Amini, Iran's Supreme Leader Ayatollah Ali Khamenei on Monday accused Iran's sworn enemies, the United States and Israel, of fomenting the unrest.