The public was riveted from the very first chord. 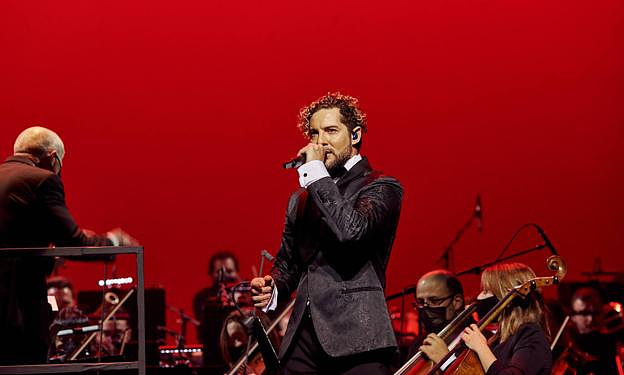 The public was riveted from the very first chord. They were completely dedicated to Michael Thomas, the Almeria artist, and the OCAL musicians. The fusion was magic once more, David Bisbal's vocals and intensity perfectly matched the music of the musicians. Juan Cruz-Guevara's arrangements made it possible for the most iconic songs to be heard in a philharmonic arrangement. This was thanks to his ability to adapt Latin pop and the singer’s ballads to classical music. You can listen to the following songs last night: "Slave Of Your Kisses", “Silence”, "Like The First Time", "Walk and come"," "My princess"," "Guilty", or "Ave Maria", among others.

David Bisbal was completely dedicated, enthusiastic and happy during the entire performance. He said that he was back at Teatro Real once again, but that "this time it's special" during the first few minutes. David Bisbal shined on stage with his Land Orchestra, surrounded by his family and friends.

Standing ovations were given to the City of Almeria Orchestra by the public. OCAL demonstrated once more, through the guidance of Michael Thomas, its ability adapt and merit, by expanding the scope to other genres. His extraordinary talent was crucial to assist David and combine into an unrivalled sound piece.

The concert was split into three parts, each with a different composition. These three works were composed by Cruz-Guevara to pay tribute to the Cosentino Group. They are the ones that promote "David Bisbal Filarmonico By Cosentino". This musical initiative reflects very specific values that are linked to Almeria, and which are shared by both David and Cosentino Group: effort and the ability to overcome, reinvent, nonconformity, and entrepreneurial spirit.

Next appointments are at the Manuel de Falla Auditorium, Granada, on December 4, and the Cervantes Theatre in Malaga on Dec 8.

‹ ›
Keywords:
DavidBisbalFilarmonicoCosentinoPoneTeatroRealMadridavidTriunfa
Your comment has been forwarded to the administrator for approval.×
Warning! Will constitute a criminal offense, illegal, threatening, offensive, insulting and swearing, derogatory, defamatory, vulgar, pornographic, indecent, personality rights, damaging or similar nature in the nature of all kinds of financial content, legal, criminal and administrative responsibility for the content of the sender member / members are belong.
Related News