EXPLAINER - Who are the children trapped in Syria's prison attack?

BEIRUT (AP), -- A disturbing series of voice messages sent by an Australian teenager from a prison outside of Damascus highlights the dire situation of thousands of children still held in detention centers in Syria and Iraq. 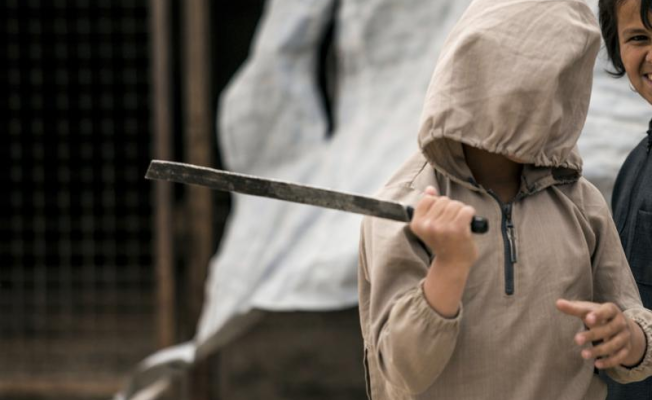 Many minors are thought to be held in Gweiran Prison. This prison has been the scene of violence between U.S-backed Kurdish fighters and Islamic State group militants since last week.

Kurdish-led forces announced Wednesday that they had taken control of the last section held by Islamic State militants. They also released a number child detainees who they claimed were being used as human shields. This ended a week-long attack by extremists on the largest Syrian detention facility. The fate of hundreds more boys remains unknown.

"We're talking about almost 800 children, who are probably the most vulnerable children on the planet right now. "The recent violence in prison has made it much worse," Juliette Touma (Middle East regional spokesperson for U.N. children’s agency).

IS fighters stormed the prison Thursday to expel thousands of their comrades, who were also rioting inside. This attack marks the largest by IS militants since 2019's fall of their "caliphate".

Multiple child inmates were killed or injured during the fighting, although numbers are unknown.

Human Rights Watch provided audio messages from the prison cell by the teenager Australian to The Associated Press. He appealed for help and said he was bleeding from the head. According to the boy, his friends were killed and he saw bodies of children aged 8-12.

Who are these children and why are they there?

Some of these children were still young when their parents took them from their home countries to join the so-called Islamic Caliphate, which was established in 2014. It overthrew parts of Syria and Iraq. Others were also born there. Many of them attended IS-run schools, where they were trained to combat.

IS committed massacres and enslaved many residents. However, they tried to re-educate boys and turn them into jihadi fighters. They used threats, gifts and brainwashing to recruit teens and children. Boys were made into suicide bombers and killers. IS videos showed children shooting hostages in cold blood or beheading them.

This was part of a coordinated effort to create a new generation militants. They called them cubs to the caliphate.

Many were captured later by Kurdish-led troops during the U.S.-backed Campaign to Bring Down IS three years back, and thrown into overcrowded, filthy detention centers, where they still languish.

Others were placed in squalid camps located in northeast Syria, which hold families of suspected IS fighters. They are subject to violence, exploitation, and abuse. When they turn 18, they can be separated from their mothers and transferred to one the detention centers, where they are joined by the fighters. It is not clear what the age limit is. According to some reports, 12 years old were held in Gweiran Prison.

Letta Tayler from Human Rights Watch estimated that 600 minor boys were held in the prison, with around half being Iraqis or other non-Syrians. Many are between 14-17 years old, but some are as young or younger than 12. It is unclear how many boys are in prison who were trained by IS, or if any of them have been convicted.

WHY ARE THEY STILL THERE?

They are being refused repatriation by their governments.

Kurdish authorities asked countries to repatriate their nationals. They claimed that keeping thousands of prisoners in cramped conditions is straining their forces and creating new generations of militants.

Tayler stated that none of the children had been brought to a judge to decide whether they should remain in detention. "These children... shouldn't have been kept in this filthy, overcrowded prison, where their lives are clearly at danger." Their countries should have sent them home to rebuild their lives.

Home governments see children as more of a threat than a rescue need.

While some former Soviet bloc countries allowed some of their citizens to return, other Arab, European, and African countries have either not repatriated enough or refused to do so.

More than two dozen detention centers are managed by Kurdish authorities in northeastern Syria, housing approximately 10,000 IS fighters. There are approximately 2,000 foreigners among the detainees, including 800 Europeans.

Another 27,500 children from 60 nationalities are also held at the sprawling al-Hol camp. This is where IS families live. They are mostly Iraqis, with a few Syrians following.

They are not yet teenagers and spend their childhood in poverty with no schools, no place for play or development, and apparently no international interest in resolving the situation.

Touma of UNICEF stated that "there needs to be collective responsibility for getting these children out of those prisons and out from these camps." She said that this responsibility lies mostly with countries with the most children.

"All of them deserve to be free from that region of Syria and return home safe and sound."