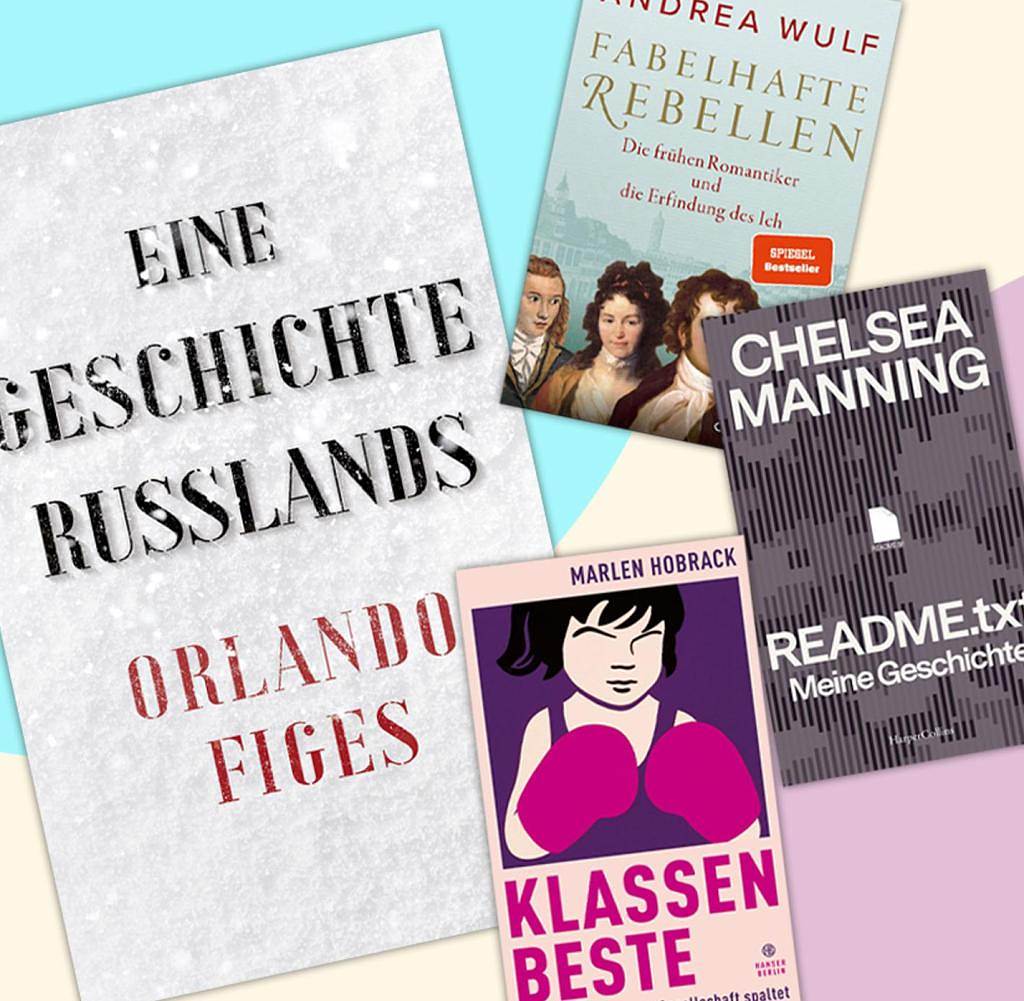 The recommendation list with the greatest distribution in the German-speaking area appears here every month. Media partners are "Literarische Welt", RBB Kultur, "NZZ" and Radio Österreich 1. Experts choose ten non-fiction books of the month from the humanities, natural sciences, social sciences and economics. Worthwhile in December:

Putin's war in Ukraine can only be understood through the myths and ideologies that have shaped Russia for centuries. No other country uses history so much as a weapon, writes Orlando Figes in his concise and at the same time compact history of Russia.

Fabulous rebels. The early romantics and the invention of the ego. Translated by Andreas Wirthensohn. C. Bertelsmann, 528 pages, 30 euros

Wulf became known for her biography of the researcher Alexander von Humboldt - now the best-selling author is taking on the Jena Romantic Circle. It is about the invention of modern individualism around 1800. The clique around Friedrich Schlegel, Friedrich von Hardenberg (Novalis)

No false tolerance. Why democracy must defend itself more than before, Europäische Verlagsanstalt, 602 pages, 34 euros

The political scientist and researcher on extremism warns of neo-Nazism. This is far from over and poses new challenges for democracy. The book explains how the state and civil society should position themselves.

The submission. Beginning and end of human dominion over nature. Hanser, 368 pages, 28 euros

"Subdue the earth": In line with the finding that this planet has now been irreversibly damaged by our species, the Viennese historian leads through 3000 years of intellectual history of human domination over nature.

Man and power. About builders and destroyers of Europe in the 20th century. Translated by Klaus-Dieter Schmidt. DVA, 589 pages, 36 euros

Are there characteristics that make powerful leaders particularly stand out? How do democrats differ from despots – and what do they not? The British historian Kershaw examines his subject based on twelve powerful figures of the 20th century, including Lenin, Mussolini, Stalin, Hitler, Churchill, de Gaulle, Adenauer and Thatcher.

With the triumph of identity politics in matters of race and gender, the class question has returned to cultural debates in recent years. Using the example of her East German origins from a humble background, the author shows why the topic should not be misused to create divisions between migration and majority society.

Dreams, fantasy and drugs are the three best vehicles that catapult us into literary dream worlds. The literary scholar Miller looks at eleven pre-modern poets who have kidnapped themselves and us into another world. Among other things, it is about E.T.A. Hoffmann, Jean Paul, Edgar Allen Poe, Baudelaire.

Illusion. The Rise of Donald Trump and the Fall of America. Translated by Christiane Bernhardt et. al., Settlers, 832 pages, 36 euros

The New York Times journalist shows why Donald Trump's comeback as US President in 2024 is likely and how the self-made millionaire's power machine works behind the scenes.

war in Europe. The disintegration of Yugoslavia and the overwhelmed continent. Rowohlt Berlin, 399 pages, 32 euros

The Austrian journalist was a long-standing Southeast Europe correspondent for various media. Here he describes how the bloody disintegration of Yugoslavia unfolded as a whole - and how it changed Europe forever.

It was Bradley Manning who, alongside Edward Snowden and Julian Assange, caused a worldwide sensation as an investigative agent in 2010. This moving autobiography tells the painful story of Chelsea Manning. A Bildungsroman about ideals of transparency and transsexuality.

It comes this month from Hermann Parzinger. The President of the Prussian Cultural Heritage Foundation recommends:

“At a time when terms like 'decolonization' and movements like 'Black Lives Matter' are confronting us Europeans and especially us Germans with our responsibility for our colonial past, which has long been repressed because it has been marginalized, is this fascinating biography by Toussaint Louverture a real treat. Despite his miserable end in a French dungeon, 'Black Spartacus' was an outstanding figure in early modernism in the Caribbean.

As an army leader out of necessity and a politician out of conviction, he fought with all means of diplomacy, intrigue and violence for one goal only: the liberation of the enslaved blacks in Haiti. The life of Toussaint Louverture gives a global dimension to the achievements of the Enlightenment, underscoring their validity for all human beings and emphasizing that Enlightenment ideas only make sense if they do not apply only to white Europeans. After reading this book, you look at the early history of anti-colonial liberation differently!” (Hermann Parzinger)