With the déconfinement the tourists return to Venice

The Serenissima is no longer sad, and is always in Italy. The tourists were returning in large numbers, Saturday, June 13, in Venice, for the reopening of the D 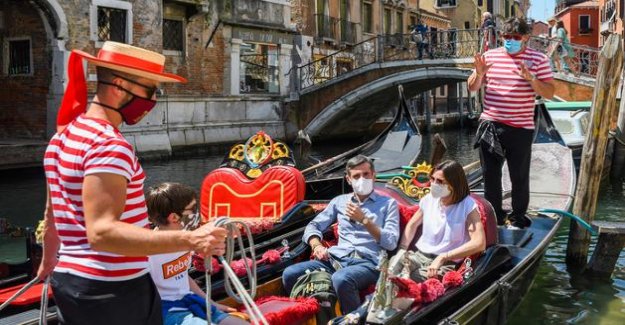 The Serenissima is no longer sad, and is always in Italy. The tourists were returning in large numbers, Saturday, June 13, in Venice, for the reopening of the Doge's Palace after four months of a pandemic, found the AFP.

Italian and foreign, they were hundreds of visitors in the queue over more than 300 metres St Mark's square, in front of the ticket windows in the ducal Palace. A thousand internet reservation had been recorded for that day of reopening, according to a news agency the local.

Describing this sudden influx, the agency Ansa evoked even a small "assault" on the ducal Palace. "There were people who lined up at 8: 00 this morning and, to be honest, we hoped for a lot. It is a very strong emotion, such as a first day of school," said Maria Cristina Gribaudi, president of the Foundation of museums, civic Venice.

inside the palace, the mask is mandatory, the signs encourage everywhere to "keep the distances and all the rooms are controlled to avoid the groups of visitors.

The Tourism industry, a vital asset to Italy

After months without tourists - or almost -this Saturday marks a clear change, with a city of Venice frequented almost normally, as an ordinary weekend of spring.
The souvenir shops have made their reappearance on the place Saint-Marc, almost all of the shops and restaurants – including the historic Café Florian - have reopened.

Around the canal the Rialto bridge, visitors were confined to the alleys of the City of the Doges, and the famous gondolas and the vaporetto water bus loaded with passengers sailed again on the channels. "If the most spoken language is Italian, the Germans and, surprisingly, the French are many," said the agency Ansa.
for Gabriella Belli, an officer of the museums of the city, she explained after the return of the first visitors: "We hope to have in the future a tourism slow. This does not mean less tourism, but a better, a good organization."

While the epidemic of Covid-19 now appears to be nearing completion (over 34,000 deaths) and that the country is moving since the beginning of may in his déconfinement, monuments, famous buildings, museums and landmarks are almost all now reopened: the Saint Peter's basilica in Rome, the Vatican Museums, the Borghese Gallery and the Capitoline museums, the site of Pompeii, the leaning tower of Pisa, the cathedrals of Florence and Milan.

Italy hopes to raise more quickly the key sector of the tourism and capture the maximum amount of foreign visitors this summer, has reopened its borders on 3 June.

see also - Déconfinement: in Venice, the gondolas are sailing again on the channel