Q&A: Almodovar discusses uncovering the past in "Parallel Mothers" 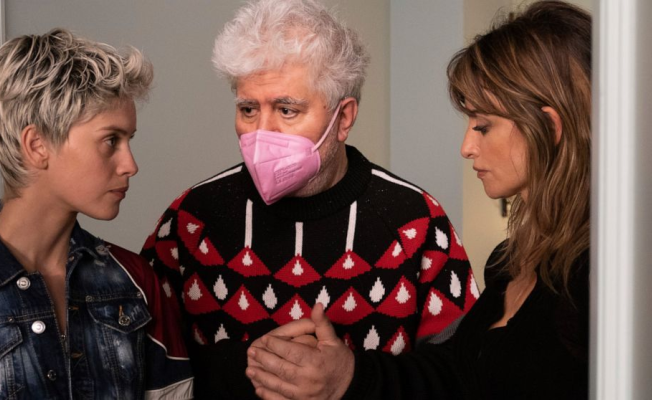 Almodovar says, "I look within myself when I speak about male characters."

Sony Pictures Classics' "Parallel Mothers" will be released in theaters on Friday. It brings Almodovar back to more dramatic territory. Milena Smit and Penelope Cruz play young mothers who meet in the hospital where their babies are accidentally switched at birth. The film explores the hidden history of Spain's mass graves, which were discovered during the Spanish Civil War.

Recent years have seen renewed interest in Spain's national dialogue and political discord regarding exhuming the remains of Francisco Franco's regime. This began in the 1930s civil war, and ended in 1975 with his death. In the past four decades, around 19,000 of 114,000 victims were recovered.

Although "Parallel Mothers", Almodovar's last movie, may not be as self-reflective, it is the director's most politically introspective movie. It also marks the beginning of his struggle with Franco's legacy. Almodovar was a Spanish filmmaker during the liberated post-Franco era.

Almodovar met with a reporter in midtown to discuss "Parallel Mothers," a film about motherhood that was being shown at the New York Film Festival this fall.

He said, "I'll keep being interested in mothers." "You can have a thousand mothers and they can give birth to a thousand different types of children."

AP: With Tilda Swinton you made "The Human Voice", a short film that was critically acclaimed, and "Parallel Mothers" during this pandemic. What has changed in the past two years about filmmaking?

ALMODOVAR : It made me realize the loneliness in which I lived. Because I had experienced loneliness while writing in the past. I believe that I'm now overcoming loneliness by going out more and eating with friends. It was sad that I had to be confined when I was sentenced to confinement.

AP: You started the pandemic by writing fantastic diaries about your movie-watching.

ALMODOVAR : I was sick at that time. The virus struck me the very first week. The virus was present even before the first week. After having been at the Oscars in February, I just arrived from LA. I felt sick and decided to stay home. They called me for quarantine three days later. It took me so many days to write and talk about the situation. One day I decided to break the rules and went out into the streets to see Madrid deserted. This is a stunning image I wanted to capture. So I pretend to be going to buy something to see the town.

AP: Ironic that you made a movie in the midst a pandemic, where swabs were used to prove the mother's maternity.

ALMODOVAR: It was science fiction when I wrote the movie one year ago. It felt very familiar when we made it.

AP: What was your initial interest in making a film about the Spanish Civil War's mass graves?

ALMODOVAR : This project has been a gift of maturity in both cinematographic and personal terms. I have wanted to make a movie on mass graves for a while, something that Spanish cinema hasn't really done. It was the visit of UN rapporteurs to Spain in 2013, which really stood out for me. It was their great-grandchildren that demanded that they examine the problem of the past. Spain has a terrible relationship with its past. There was almost a paralyzing fear that the war would be mentioned for 40 years. Spain was enveloped in silence. This is a generation that was born in democracy and who are calling for the graves of their loved ones to be exhumed.

AP: The film's political intentions are disguised by a melodramatic entry point.

ALMODOVAR - I wasn't content to make a movie about mass graves. It was through a character who has a legacy from her mother. She saved her and raised them as she was an orphan. To show that they exist, it is to open the mass grave. Franco took all of humanity away from them, and condemned them to inexorable exile. Because of her commitment to uncovering historical truths while she is hiding them in her own life, I was drawn to the story through her mother.

AP: Your 1980s films were made after years of Spanish censorship. They contributed greatly to a new post Franco period in the arts. Franco must have died for you to live, as you've stated before. Is "Parallel Mother", motivated by a new surge of fascism?

ALMODOVAR: When I started making movies, he had just died. If he were still alive, I wouldn't have been able make movies. It was almost as if we were inoculated from civil war in Spain because of the terrible experience we had. Despite seeing the far right grow in France, Bolsonaro happened here in Brazil and Trump happened here in France, I was still naive enough to believe that the far-right would not arrive in Spain due to that horrible experience.

Sometimes, I believe this to be the Trump effect. Others around the globe were encouraged by his willingness to speak out for his far-right views. They lost all fear. All of it boiled over, even in Spain. There are now things that are impossible today, compared to what was possible in the ’90s or '80s. More homophobic attacks and more xenophobia are common. It is very disappointing to realize that all the values we have fought for, we must again rise up and fight for them.