After a century and half of absence, 'Nabucco" returns to Real 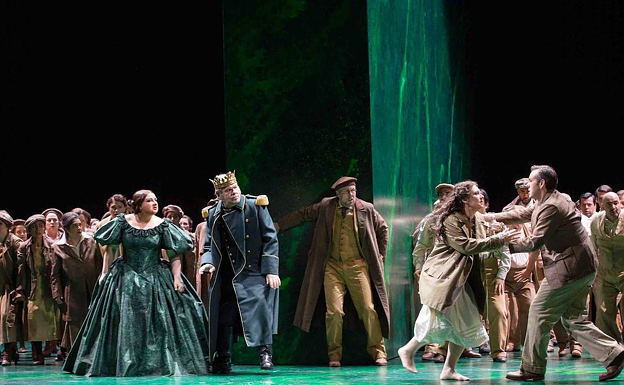 Nabucco is Giuseppe Verdi’s most beloved opera. The Teatro Real has not performed it in over a century. Therefore, the coliseum chose to end the season of its return back to normality following the worst of the pandemic. It will be performed 15 times between July 5th and 22 in a joint production between the Royal Opera and Zurich Opera. The musical direction of Nicola Luisotti, and the staging by Andreas Homoki, are the highlights of this new co-production. This long-awaited "Nabucco" takes the action from ancient Babylon to Europe at War with the 19th century emerging nations. You can enjoy a live broadcast on July 15 in Spanish squares, auditoriums and theaters as well as museums and cultural centers across Spain.

Nabucco was the first Verdi opera to be performed in 1850 at Teatro Real. This was in the acoustic trials that were conducted before its opening. It was first performed on the Teatro Real's stage in 1853. The opera was then presented in subsequent seasons with great success until 1871. It had never been performed in the hall since. Now, 151 year after his last performance at The Real, he is back in the coliseum, this time with three great Verdi voices.

Andreas Homoki is a stage director and debutant at The Real. He transfers the conflict between Jews, Babylonians, from the 6th Century BC to the confrontation between Italians, Austrians, and the 19th century. He explains that the polytheistic Babylonian system is juxtaposed with a modern and new system, which is embodied in a monotheistic vision for the world of Hebrews.

The choir plays a central role in 'Nabucco,' both in the musical structure as well as in the dramaturgy. The Royal Theater Choir will perform the famous 'Va peniero' from the slave choir. This is the song that gives voice to the oppressed as in the mythical Babylon, Italy in 19 century, or Ukraine today.

The drama is set in a minimalist, minimal, and conceptual set by Wolfgang Gussmann. He also signs the exquisite costumes with Susana Mendoza.

Nabucco is part of Verdi’s first creative period. It was a crucial moment in the artistic and personal life of the famous Italian composer. After the deaths of his children and wife, Verdi was in deep distress. He also suffered from the failure of 'Un giorno di regno'. He thought about quitting composition but met with La Scala director in Milan who suggested the creation of an opera with a biblical libretto. The opera would be about the resistance of the Jewish people against the Babylonian invasion. It was inspired by the composer who composed the score with very little rest.

It was first performed at La Scala on March 9, 1842. It was a huge success and the connection of the oppression suffered by the Jews and that suffered by the Italians under the rule of the Austro–Hungarian empire gave it immense popularity. Verdi was made one of the heroes in the "Risorgimento", which would result in the unification and unity of the Italian territories. The unofficial anthem for the new Italy would be the melody from the slave choir.

It was also the moment Verdi met Giuseppina Stepponi, a soprano who would become his future partner. She sang the sinister role of Abigaille. Verdi was able to relaunch his creative career after this success.

A summer preview will take place on July 2, at 6:05 p.m. followed by an "After Opera" for young people between 35 and 65 years old in the Royal Ballroom. The opera will be broadcast on MyOperaPlayer for free, and can be viewed in all Spanish squares, cultural centers and auditoriums as part of Opera Week.

‹ ›
Keywords:
NabuccoRegresaRealTrasSigloMedioAusencia
Your comment has been forwarded to the administrator for approval.×
Warning! Will constitute a criminal offense, illegal, threatening, offensive, insulting and swearing, derogatory, defamatory, vulgar, pornographic, indecent, personality rights, damaging or similar nature in the nature of all kinds of financial content, legal, criminal and administrative responsibility for the content of the sender member / members are belong.
Related News