Post a Comment Print Share on Facebook
Famagusta
DOLLAR 18,85
EURO 20,20
GOLD 1.133,33
BIST 4.505,34
The state of NRW has to burn millions of masks and van Laack smocks
"That's the only thing I want - drugs"
How Goethe plunged his son into misfortune
"America will soon be in civil war"
Here you can now get funding for the renovation
"It's not just about having sex, it's about much more"
The "Komet" brought Udo Lindenberg his first number 1 hit
Fall and demolition after an abstruse jump to 161.5 meters
"I felt like my heart was being ripped out"
What you should now know about organ donation

This is how the 13 Spanish restaurants with three Michelin stars are: their owners, menus and prices

With Atrio and Cocina Hermanos Torres recently awarded the third distinction in the 2023 Michelin Guide -presented a few days ago-, this is how the journey through the 13 Spanish tri-stars remains:. 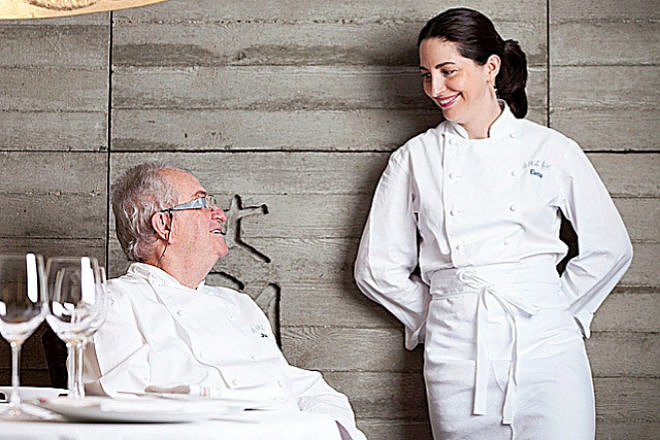 With Atrio and Cocina Hermanos Torres recently awarded the third distinction in the 2023 Michelin Guide -presented a few days ago-, this is how the journey through the 13 Spanish tri-stars remains:

One option is a route through the Basque Country, with this first stop. It started in 1897 as a tavern in Alto de Miracruz as the project of Elena Arzak's grandparents, who leads this tri-star from San Sebastián in the fourth generation, whose father, Juan Mari Arzak, transformed in the 1970s. It is the dean of the Michelin Guide in Spain, for being the restaurant that has been distinguished for the longest years in a row and the oldest three-star restaurant. Its cuisine with Basque roots "open to the world" can be tasted via three options: tasting menu, for 260 euros; a la carte, for 230 (appetizer, starter, main course and dessert to choose from a list of dishes); and "harmonized with wines", for 418 euros.

Restaurant and boutique hotel -in addition to Oteiza, a more casual concept- make up the house of Pedro Subijana, who settled in 1970 in this space on the slope of Monte Igueldo, in San Sebastián. First, he came as an employee until, in 1980, he bought the restaurant, which he later expanded in square meters. With three stars since 2007, its offer gives rise to the Aranori and Bekarki menus, "two variants to combine different options that include our latest recipes", with the same price of 270 euros (without drinks) and dishes such as Kiskilla, crispy heads with venere rice and salpicón sorbet.

The route through the three tri-stars from San Sebastián is completed with a visit to the mother house of the chef who holds the record for distinctions in Spain: Martín Berasategui has 12 among his seven restaurants, after winning one this year at Etxeko Ibiza -which has made up for the loss by closing EmeBe Garrote-. Its parent company in the Gipuzkoan town of Lasarte has a tasting menu for 315 euros, which can be completed with a pairing for 175. There is the alternative of choosing à la carte vintage dishes, such as its famous caramelized millefeuille with smoked eel, foie gras, chives and green apple, from 1993.

The trip to the three Basque stars would include this space in Larrabetzu (Vizcaya), where in 2005 Eneko Atxa opened this restaurant that has had three stars for just over a decade (the chef adds two more in other restaurants). Located very close to Bilbao Airport, an avant-garde bioclimatic building (awarded two years as the Most Sustainable Restaurant in the World), which diners visit in stages before sitting in the dining room to enjoy the Adarrak (roots, in Basque) tasting menu. for 260 euros (it goes up to 300 euros in January).

Catalonia gives rise to a route through four restaurants, the same number as in the Basque Country. You can start with the mother house of the brothers Joan (cook), Josep (sommelier) and Jordi (pastry chef) Roca in the Taialà neighborhood, in Girona. They offer two menus: Tasting, for a price of 230 euros and pairing for 85 more; and Festival, for 270 euros and pairing for 130. To book, you need to do it 11 months in advance: for example on December 1, places open for November 2023. The family group adds more businesses in the city: Can Roca -his parents' bar-, the Casa Cacao hotel and store, the Normal bistro, the Rocambolesc ice cream parlor and confectionery, Bar Cacao and the Mas Marroch events space.

The Catalan route adds three slopes to El Celler with a triple star in Barcelona. One of them is this restaurant in the Monument Hotel, within the Martín Berasategui group (which has had an agreement with Grupo Cadarso, owner of the luxury hotel, since 2005) and with the kitchen in charge of the Italian chef Paolo Casagrande, who marks the offer with His own style of cooking, with dishes such as Squid Tartare with runny egg yolk, onion and kaffir broth. You can eat à la carte or choose the tasting menu, which is priced at 305 euros. In addition, it offers another menu only for lunch for 205 euros. The Berasategui group has another restaurant here: with Oria Restaurant, with Xabi Goikoetxea as head chef.

It is one of the three Spanish tri-stars, led by a truly media chef, since Jordi Cruz is one of the judges in the MasterChef contest. This space for "creative and traditional signature cuisine" is actually a project that includes a restaurant and a five-star luxury hotel. Catalan cuisine? Partly. La Caja China (fried bread with grilled eel) or Tomato de colgar pasificado are dishes on the tasting menu, priced at 250 euros (without drinks), to which it is possible to add wine pairing for 140 euros more. Cruz adds a total of six stars if the ones he has in other businesses are added.

It is one of the two novelties in terms of three-starred Michelin Guide 2023, presented this Tuesday. It is the restaurant of the twins Sergio and Javier Torres, located in an old tire workshop of almost one thousand square meters, in the Les Corts neighborhood, in Barcelona. It is a kitchen in which the customer eats: in this open space, around the central stove are the tables from which the customer eats or dines, but also watches the preparation or, at least, completion of the dishes. Its offer is based on a single tasting menu, Revolución, with a price of 255 euros and dishes such as cured squid, bird consommé and caviar.

Together with Cocina Hermanos Torres, it is the other novelty with a triple star in the latest edition of the Michelin Guide -it had two stars since 2004-. It combines haute cuisine space and a luxury boutique hotel in the historic center of Cáceres, although Toño Pérez and José Polo opened Atrio in 1986, in a previous location. In any case, it materializes the dream of this couple to create a hospitality concept designed to the millimeter. His proposal adds cuisine linked to Extremadura and one of the best wineries in Europe created by Polo. Its tasting menu costs 205 euros, without drinks. To round off your trip to Cáceres, you can have lunch or dinner in another business run by these entrepreneurs: Torre de Sande, very close to Atrio. And, in two weeks, the most demanding tourism will be able to enjoy its dozen luxury suites with butler service, in the 11th century Casa Palacio de los Paredes-Saavedra.

A getaway to Denia may mean booking in the matrix of a chef who has seven Michelin stars. Extremaduran by birth and Valencian by adoption, he has his avant-garde kitchen space in this Alicante town from which he has been creating and designing concepts in Valencia, London and Madrid (at the Mandarin Oriental Ritz, where in Deessa, he has just obtained the second star ). The triestrellado works with the Cocinar Belleza tasting menu, priced at 250 euros, "created from our most iconic products and other unknown ones, contributing all our knowledge, innovation, culinary vision and passion for creativity," he explains. You can add Harmony of wines for 150 euros more.

A good excuse for a weekend in Cantabria, where this is the tri-star of Jesús Sánchez and Marián Martínez. Located about 20 kilometers from Santander, it occupies an 18th century palace in Villaverde de Pontones, a town that has less than 350 inhabitants. Opened in 1993, the box that contains the kitchen of this Navarrese chef adds appeal with several dining rooms, a large wine cellar, a bakery on the first floor, and even a classroom where Sánchez and his team come to offer private sessions for companies . The 2022 proposal linked to "a reflection on flavor and temporality" is synthesized in a tasting menu for 237 euros (without drinks), which rises to 362 with pairing and up to 447 if you opt for a premium selection of wines.

Is the triestrellado with the most personal proposal in the Spanish market? Ángel León opened a small place in 2007 (where La Taberna del Chef del Mar is located today, with his wife, Marta Girón de Sola, in charge) in El Puerto de Santa María, Cádiz, until moving in 2015 to Molino de Mareas, an impressive space that has already arrived with two stars and where it immediately got the third. Since the beginning of his career, this chef has opted for a 100% marine proposal, not only based on fish and shellfish, but also on algae, cereals and other seafood. Its menu for the 2022 season is called Planeta Agua and costs 270 euros; You can add wine pairing for 125 and 195 euros more.

If you live in Madrid, Dabiz Muñoz's space may not be a getaway, but it can be a plan for any gourmet who wants to learn about the proposal of the Best Chef in the World according to The Best Chef Awards list. It is the three-starred space of the man from Madrid (on the ground floor of the NH Collection Madrid Eurobuilding), where his ability to combine flavors in a radical but balanced way reaches maximum levels in the menu La Cocina de los Cerdos Voladores for 365 euros (without drinks). Another plan is to visit RavioXO, a concept around dumplings opened in May and recently awarded by Michelin, becoming, being inside El Corte Inglés de Castellana, the first starred restaurant inside a department store in the world.

‹ ›
Keywords:
DirectivosestilovidarinconesgastronomicosGastronomíaEstilo De VidaRestaurantes
Your comment has been forwarded to the administrator for approval.×
Warning! Will constitute a criminal offense, illegal, threatening, offensive, insulting and swearing, derogatory, defamatory, vulgar, pornographic, indecent, personality rights, damaging or similar nature in the nature of all kinds of financial content, legal, criminal and administrative responsibility for the content of the sender member / members are belong.
Related News