Just a year ago, he was proclaimed Best Chef in the World at an event in Amsterdam, where he was presented at The Best Chef Awards, a list that held a gala in Madrid this Tuesday night to make the 2022 edition public, in which Dabiz Muñoz Repeat as leader. 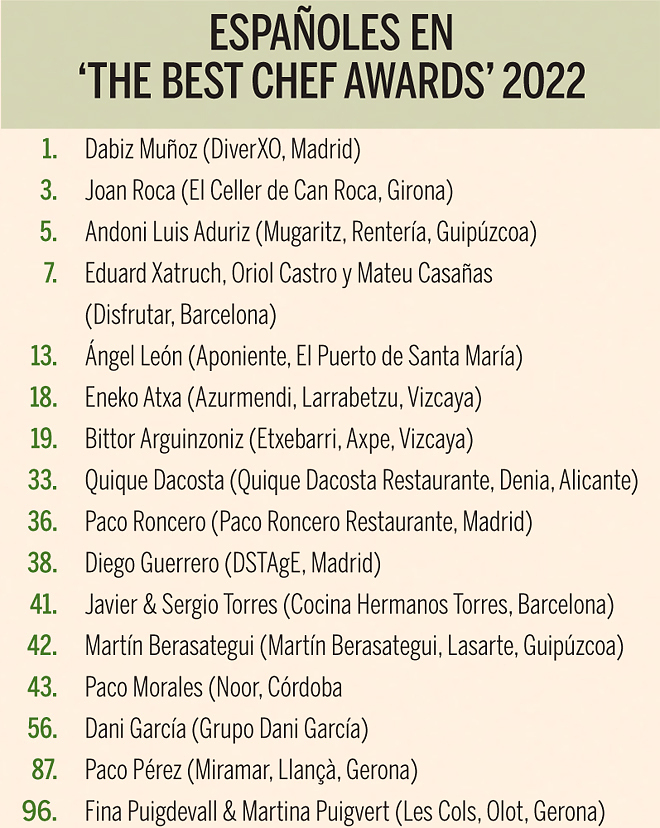 Just a year ago, he was proclaimed Best Chef in the World at an event in Amsterdam, where he was presented at The Best Chef Awards, a list that held a gala in Madrid this Tuesday night to make the 2022 edition public, in which Dabiz Muñoz Repeat as leader. The celebrity chef, owner of DiverXO -the only three-starred chef in the capital-, received the award today in Madrid, a city that has hosted several events these days in the context of the presentation of this list focused on chefs, instead of restaurants.

It is an alternative ranking and, in fact, complementary to other classifications such as The World's 50 Best Restaurants, which already has 20 editions, while The Best Chef launched its first edition in 2017, as the project of the Polish neuroscientist Joanna Slusarczyk and the Italian gastronome Cristian Gadau, with the peculiarity that the votes of the cooks are the ones that weigh the most when it comes to setting up the ranking.

At the Palacio de Cibeles, headquarters of the Madrid City Council, six hundred people linked to the world gastronomy sector gathered last night, including quite a few chefs from the 100 that make up The Best Chef Awards list. For Spain, the balance has been very positive. On the one hand, because of the repetition as leader for the second consecutive year of Dabiz Muñoz, who, in addition to renewing the title of Best Chef in the World, has received two other awards: The Best Chef, voted by his own colleagues, as a bonus award; and The Best Chef City Gourmet Award, promoted by Cosentino.

On the other hand, Spain takes 16 positions in the Top 100 of the 2022 edition of The Best Chef, compared to the 13 it had last year. Among them, Joan Roca (El Celler de Can Roca, in Girona) is third in the world, after rising from fourth place in 2021 -by the way, the Catalan and Muñoz tie in having been world leaders twice-; Andoni Luis Aduriz (Mugaritz, in Rentería), is placed fifth, coming down from third; and Eduard Xatruch, Oriol Castro and Mateu Casañas, owners of Enjoy (Barcelona), go from sixth to seventh. Other Spaniards in the Top 100 are Ángel León (Aponiente), Eneko Atxa (Azurmendi), Paco Roncero, Diego Guerrero (DSTAgE) or Paco Morales (Noor), among others.

If you count the restaurants with more than one chef at the helm, those 16 positions are equivalent to 20 chefs, with cases such as Enjoy and a couple of premieres on the 2022 list: the twins Javier and Sergio Torres, from Cocina Hermanos Torres (Barcelona), they go directly into number 41; and Fina Puigdevall and Martina Puigvert, mother and daughter at the head of Les Cols (Olot), are placed at 96.

Another curious debut in this Top 100 is a more than consolidated and respected chef: the Basque Bittor Arguinzoniz, owner of Etxebarri (Axpe), who comes in at 19th place. As another novelty in 2022, there is the Andalusian Dani García, centered with his group in national and international expansion and with a portfolio of formats, where the closest to haute cuisine is SmokedRoom, which reaches the list in 56th place; and the Catalan Paco Pérez (Miramar) opens in 1987.

If establishments located in Spain run by foreign chefs were added, the national market would reach 18 positions in the Top 100, with the Italian Paolo Casagrande, from Lasarte (belonging to Grupo Martín Berasategui in Barcelona); and the Argentinian Paulo Airaudo, from Amelia (San Sebastián), which opens in 1985.

The world Top 5 is completed with the Danish René Redzepi, second; and the Italian Massimo Bottura, fourth.

These new additions respond to the 100 nominations that The Best Chef raises each year, one of the peculiarities of its operation. As a list focused on chefs -not restaurants-, it is the result of the votes of 350 professionals, between 150 journalists and gourmets and 200 cooks. The latter are the 100 chosen the previous year and the 100 nominees this year -in turn, the latter are chosen by those 150 experts-. When counting the votes, a weight of 70% is applied to the chef vote and 30% to the rest.

This ranking celebrates its sixth edition, with the support of Perlage (Polish water manufacturer) and jointly backed by the City Council and the Community of Madrid, a region that thus seeks to continue positioning itself with a world culinary destination, something for which the double leadership of Dabiz Muñoz in two years seems key.

‹ ›
Keywords:
DirectivosestilovidarinconesgastronomicosEstilo De VidaGastronomía
Your comment has been forwarded to the administrator for approval.×
Warning! Will constitute a criminal offense, illegal, threatening, offensive, insulting and swearing, derogatory, defamatory, vulgar, pornographic, indecent, personality rights, damaging or similar nature in the nature of all kinds of financial content, legal, criminal and administrative responsibility for the content of the sender member / members are belong.
Related News 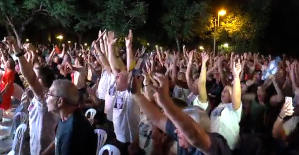