The second vice-president, Yolanda Díaz, will launch next Friday, July 8, the listening project of her new platform in an act made up of representatives of social organizations and civil society, with which she takes the reins to rearm the left, downcast after the Andalusian elections. 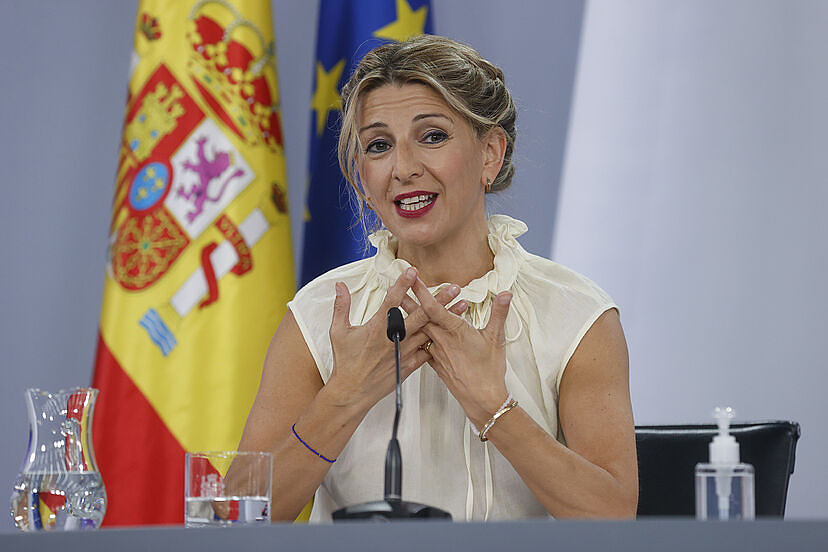 The second vice-president, Yolanda Díaz, will launch next Friday, July 8, the listening project of her new platform in an act made up of representatives of social organizations and civil society, with which she takes the reins to rearm the left, downcast after the Andalusian elections.

The launch of 'Sumar', which already has a logo and promotes participation from social networks, aims to mobilize a progressive electorate that has had high levels of abstention in recent elections, with a process that seeks to widen and expand the current space of United We Can.

In addition, it will take place in a climate where relations with the purple formation have been stitched together as a result of the negotiation of the anti-crisis decree, leaving behind moments of tension in the past, as can be seen within the confederal space.

The presentation ceremony will be in an iconic place in Madrid, in the Matadero cultural center, and as they have explained to Europa Press from their team, a long list of relevant personalities from civil society is being outlined.

The presence of the parties is also contemplated but without any front-rank leader, rather it is thought of low or militant positions so as not to overshadow the spirit of the initiative: give weight and voice to the citizens.

For example, the commons have already advanced that they will be present and IU has made clear its involvement with this initiative with its political report from its Federal Coordinator and in the case of Podemos they will be available to whatever the vice president's team requires.

In addition, the following day a Citizen Council of the purple formation will be held and that weekend the PCE Congress will take place, which will have the opportunity to pronounce on the guidelines set by the start of the listening process.

The perception, according to several sectors of United We Can, is that this act enthrones and gives more stripes to Díaz at the head of the alternative left to the PSOE, thus reinforcing its position as the main reference in this space after the departure of Pablo Iglesias's policy. .

And it is that among the different sections of United We Can they are clear that the current confluence, whose current brand already accumulates significant wear, is the best bet to revitalize the options and broaden the bases.

This phase of the consultation with civil society will last approximately six months with a tour throughout Spain and, once the stage is over, Díaz said that he will make a decision on whether he will be a candidate for the next general elections, something that will be done collectively. and in any case through a primary process.

The central axis of this listening process is to form the ideological bases for a future project of the left for the next decade, which will have an electoral translation from the will to open politics to civil society to overcome disaffection with the parties and, in turn, reactivate the progressive voter.

Its own statutes pivot from that idea, 'Sumar' is committed to "fostering and strengthening" civil society participation in politics to "improve democratic quality and human development."

At the same time, he has emphasized that the project has a transversal vocation and is not limited to the left of the PSOE, a space that he came to define as "small" and "marginal".

During these months, in which he has prepared the launch of the platform, Díaz has explained that political formations are essential in this phase, but they must have a secondary role while the centrality of the process must lie with the citizenry.

Thus, sectoral meetings will be organized, for which there are working groups that will streamline the sessions, whose purpose is to outline a compendium of measures to transform the country. From his team they put as an example of the philosophy of the listening process a meeting that Díaz had with more than 50 experts from the energy sector to collect his proposals.

To help her take these steps, the vice president has surrounded herself with an advisory core of people she trusts, such as the mayor of Compostela Aberta, Marta Lois, the historian and former spokesperson for En Comú Podem in Congress Xavier Domènech, the MEP Ernest Urtasun , which denote the ascendancy of the commons in this project, in addition to the role played by his chief of staff Josep Vendrell. Deputies such as Antón Gómez-Reino or Txema Guijarro and the clear support of the federal coordinator of IU and Minister of Consumption, Alberto Garzón, are also very close.

This launch also coincides with a climate of greater harmony between Díaz and Podemos, after a time of estrangement and some sound discrepancy, such as the shipment of weapons to Ukraine, although the formation has always highlighted that Díaz is their candidate and they offer him the strength of her organization to accompany her, emphasizing that they are "indispensable" for the unit.

From the purple formation they perceive that the negotiation of the anti-crisis decree has generated cohesion and reconnection with the vice president, especially as a result of a complex and complicated negotiation with the PSOE. And proof of this is the symbolism that represented the image of the three ministers in the LGTBi Pride act organized by Igualdad and also that they attend a summer course that brings together the entire leadership of Podemos.

And it is that party sources consider that, after the elections in Andalusia and the current political context, Díaz understands a better vision of the party's work and its proposals to demand more ambition from the Executive towards clearly leftist positions.

On the other hand, Díaz and the leader of Más País, Íñigo Errejón, have also shown rapprochement in the last three months by coinciding in various acts, in addition to sharing a rally together for the first time in the 19J elections. In turn, the relationship with the leader of Más Madrid, Mónica García, is good and the closeness with the mayor of Barcelona, ​​Ada Colau, with whom he shared the 'Other Policies' event last November in Valencia, is well known.