Unemployment drops by 33,512 people and employment is maintained in November

From the Ministry of Labor they have highlighted that this total number of unemployed is the lowest in a month of November since 2007 and is part of an adverse economic situation on the international scene. 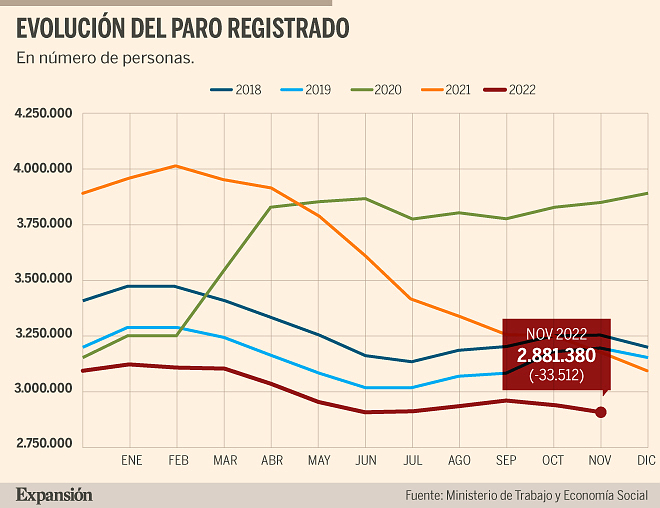 From the Ministry of Labor they have highlighted that this total number of unemployed is the lowest in a month of November since 2007 and is part of an adverse economic situation on the international scene.

Regarding the affiliation figures, the Ministry of Inclusion, Social Security and Migrations has indicated that the data for November improves the average of 37,000 less employed for that month of 2017-2019, although it is worse than last year when employment advanced by 61,768 people on average.

The drop in unemployment is also more moderate than that of November last year, when it was 74,381 people, the highest for that month in the series.

By economic sectors, registered unemployment fell in services, with 25,083 fewer unemployed people; agriculture, 4,507 fewer; industry, a decrease of 3,783, and in construction, with a drop of 1,924.

Unemployment among young people under 25 years of age also fell by 4,182.

By region, registered unemployment in November decreased in eight autonomous communities. The greatest decrease was registered in the Valencian Community (-4.32%), followed by Madrid (-2.48%) and Andalusia (-1.47%). On the other hand, the community where unemployment rose the most was the Balearic Islands (4.55%).

Andalusia continues to be the community with the most unemployed workers (749,377), followed by Catalonia, which returns to second place with 348,982; the Valencian Community, third with 339,295; and Madrid, which remains fourth with 304,571.

Regarding the total number of registered contracts, it totaled 1,424,283 of which close to half, 615,236, were of an indefinite nature.

Back to affiliation, and in seasonally adjusted terms, Social Security added 78,695, up to 20.31 million employed chaining 19 consecutive months of increased employment.

Of the total average affiliates, employment advanced among men to 10.74 million employed while it fell among women who are 9.53 million. The average number of employed in November is 531,273 more than a year ago.

"The data for the first eleven months of the year allow us to anticipate a growth in affiliation in the whole of 2022 close to 4%, the highest rate of growth in recent years," highlights Inclusion.

By sectors, services pulled employment with 21,190 more affiliates in average terms, while it fell in other activities.

Inclusion adds that innovative activities such as computing and telecommunications "are growing remarkably" throughout the national territory.

Regarding the type of employment, in November the increase in affiliates with permanent contracts accelerated, which exceeded 2.3 million people compared to the end of 2021.

Affiliates with contracts of less than 30 days were also reduced by more than 3 million and the average duration of the total contracts that caused leave in these eleven months increased by 49 days compared to the same period in 2019.

On the other hand, the number of workers in ERTE remained stable at around 20,000 employed.

‹ ›
Keywords:
EconomíaParo
Your comment has been forwarded to the administrator for approval.×
Warning! Will constitute a criminal offense, illegal, threatening, offensive, insulting and swearing, derogatory, defamatory, vulgar, pornographic, indecent, personality rights, damaging or similar nature in the nature of all kinds of financial content, legal, criminal and administrative responsibility for the content of the sender member / members are belong.
Related News