Post a Comment Print Share on Facebook
Famagusta 27
DOLLAR 16,68
EURO 17,51
GOLD 973,86
BIST 2.490,24
An unavoidable takeover bid on Indra
Beef will no longer be bad for the environment
The fines and points that are lost for speeding: up to 600 euros and six...
The reasons why Alantra believes that there will not be a liability war...
Abengoa heads for collapse after volatilizing 20,000 million in seven...
Sepi closes its fund with 30 rescues for 3,255 million
Sherpa Capital enters the aeronautical sector with the acquisition of...
Prisa dismisses Roberto Alcántara to admit Andrés Varela to his council
Logicor buys 88,000 square meters in Abrera from the Grifols family for...
Izertis makes its largest purchase with the cybersecurity company Sidertia

The electoral result of this 19J in Andalusia also has its reading in a national key and supposes an unmitigated defeat for the socialists of Pedro Sánchez, while the PP of Alberto Núñez Feijóo emerges victorious. 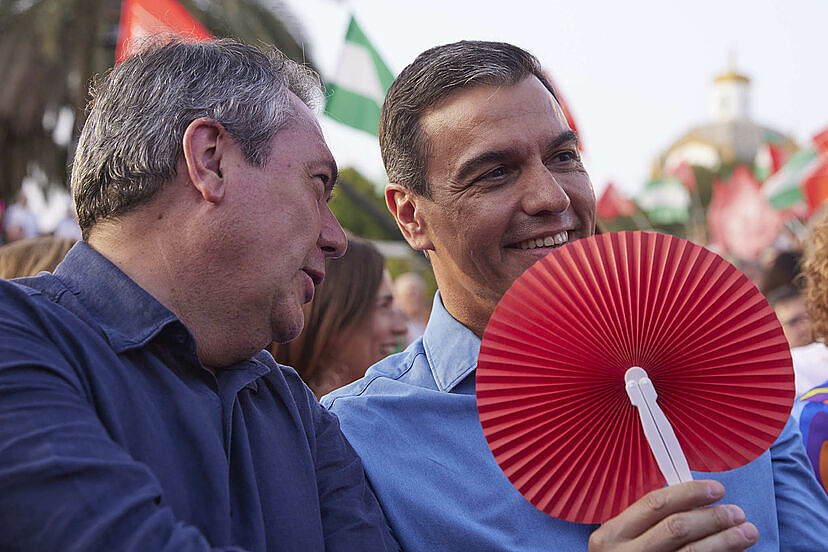 The electoral result of this 19J in Andalusia also has its reading in a national key and supposes an unmitigated defeat for the socialists of Pedro Sánchez, while the PP of Alberto Núñez Feijóo emerges victorious.

The PSOE has not only failed to recover the main historical bastion of the party after Pedro Sánchez's commitment to Juan Espadas as replacement for Susana Díaz, but has also obtained its worst result in history with 30 seats. This new setback for the party comes after the poor results of the socialists in the autonomous communities of the Community of Madrid and Castilla León. It should be noted that Sánchez has had a limited presence in the campaign, with only three acts together with Espadas, who has been supported by several ministers in the last two weeks. A strategy with which Ferraz has tried not to link the national party too much with the results of these elections.

For its part, the PP faced its first date with the polls with Alberto Núñez Feijóo at the helm and has emerged victorious. The popular candidate for the Junta de Andalucía Juanma Moreno has obtained 58 seats, his best result in the region and a large absolute majority that allows him to govern alone (the 55 seats mark the absolute majority in the region).

During the campaign, Feijóo has intensified its presence in Andalusia with a parallel agenda to Moreno, with whom it has only coincided in one act in Antequera (Málaga). Today the president of the PP has followed the electoral recount from the national headquarters of the formation located in Génova street in Madrid, accompanied by the deputy secretaries of Institutional, Esteban González Pons; Organization, Miguel Tellado, and Regional and Municipal Coordination, Pedro Rollán, as well as the parliamentary spokespersons for the Senate, Javier Maroto, and for Europe, Dolors Montserrat.

In the case of Santiago Abascal, leader of Vox, he has turned to the campaign with a dozen public events together with the candidate for the Presidency of the Board, Macarena Olona, ​​to underline the message that the PP will not even have his abstention if it does not have Vox members in the future government. Finally, they have been left out of the Government and the negotiation, since the PP will manage the community alone. In addition, support for this party has stagnated with 14 deputies, compared to 12 in 2018.

For its part, Ciudadanos, led at the national level by Inés Arrimadas, has once again suffered another major blow by staying out of the Andalusian Parliament. Arrimadas got involved and supported Juan Marín, with a presence at the start, the central act and the end of the campaign.

Yolanda Díaz also loses in these elections. After staging his support for the candidate for Por Andalucía, Inmaculada Nieto, in the pre-campaign during a visit to the Seville Fair, Díaz has been involved in the last week of the campaign with three public events in which he has shared a bill separately with the Secretary General of Podemos, Ione Belarra, and the leader of Más País, Iñigo Errejón. The formation has achieved only 5 seats and Adelante Andalucía, 2. It must be remembered that both formations added 17 deputies in the previous elections.

One of the possible consequences of the overwhelming victory of Juanma Moreno may be to accelerate the alternative of the new 'popular' leader Alberto Núñez Feijóo to Pedro Sánchez and a change in the political cycle in Spain.

If the elections of the Community of Madrid, on May 4, 2021, showed that the PP can govern without the need for Vox, today's result is the confirmation of this scenario, after the absolute majority of Moreno, who will not even need of the abstention of those of Abascal.

This result also confirms that the reunification of the center right around the Popular Party continues to take place. And this is demonstrated by two facts: the absorption of the Ciudadanos vote -as already happened in Madrid- that has lost its 21 seats and the prick of Vox in this autonomous community.