Inflation moderates one point in December and closes 2022 at 5.8% 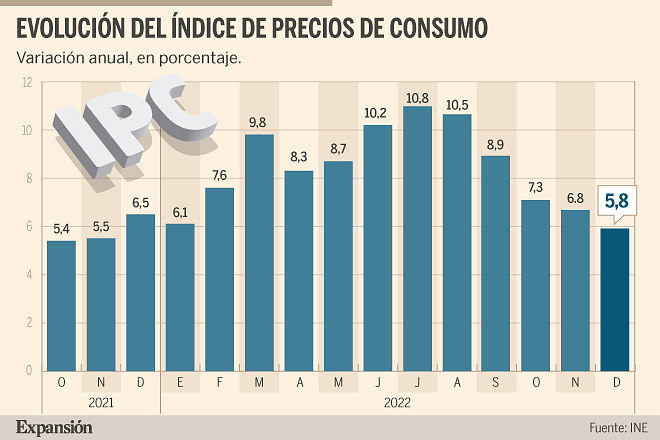 The Consumer Price Index (CPI) moderated again in December for the fifth consecutive month. The main indicator of inflation closes the year at 5.8%, one point less than in November, its lowest figure since November 2021, when it stood at 5.5%, according to the indicator advanced today by the Institute National Statistics Office (INE), which will not be confirmed until January 13.

The general CPI is below core inflation, an index that does not reflect the more volatile evolution of fresh food and energy, making it a more precise indicator of the structural situation of prices. The underlying year-on-year rate rose six tenths, to 6.9%, thus exceeding the general index for the first time since February 2021.

The moderation of the year-on-year CPI to 5.8% in December is mainly due to the fact that electricity prices rise less than in December 2021 and that fuels register a greater decrease than last year.

For their part, clothing and footwear stand out, although in the opposite direction, whose prices decreased, but less than in December 2021, and the increase in the prices of tobacco and processed foods.

The ICAE indicator of energy inflation, which contributes to a great extent to the rise or fall of the general index of price evolution, brought forward this week the data on the downward evolution of the energy component of the CPI. However, at the end of the year, food prices remain at all-time highs, with some products doubling average inflation.

In monthly terms (December over November), the CPI registered an increase of three tenths, compared to the decrease of one tenth of the previous month, while the Harmonized Consumer Price Index (IPCA) placed its interannual rate at 5.6% , more than one point lower than that registered the previous month. For its part, the estimated monthly variation of the IPCA was 0.1%.

THE IPC ends 2022 below the data with which it premiered. A year ago the indicator was at 6.5%: in January it dropped to 6.1% and it shot up to 9.8% in March after the start of the war in Ukraine. After holding back slightly for the next two months, it climbed above 10% in the summer months, peaking in July (10.8%), its highest level since September 1984.

After falling three tenths the following month, the CPI managed to fall below double digits in September and has continued to moderate during the last quarter until today as a result of the containment of the prices of the

energy and fuels. Despite this, food items have continued to rise with average increases of 15% and some groups above 18%.

If the CPI for November served to confirm the rise in pensions, the interannual rate for December is the one taken as a reference to update salaries. This affects the agreements that contain a safeguard clause to offset the initial rise of the year with the year-on-year CPI for December, which will have to take as a reference the percentage that the INE confirms in January, a situation for some 1.95 million workers.

According to the agreements registered in the third quarter, until September increases of 5% had been agreed, following the inflationary trend that had remained at the end of the year.

The Government and other national and international organizations are urging the social agents to reach an agreement on the income agreement that gives a path of evolution of wages and business margins in the coming years.