Confidence in times of uncertainty

The President of the Government defends that economic growth makes it possible to maintain "cautious optimism" and calls for the implementation of the Recovery Plan as an antidote to international uncertainty. 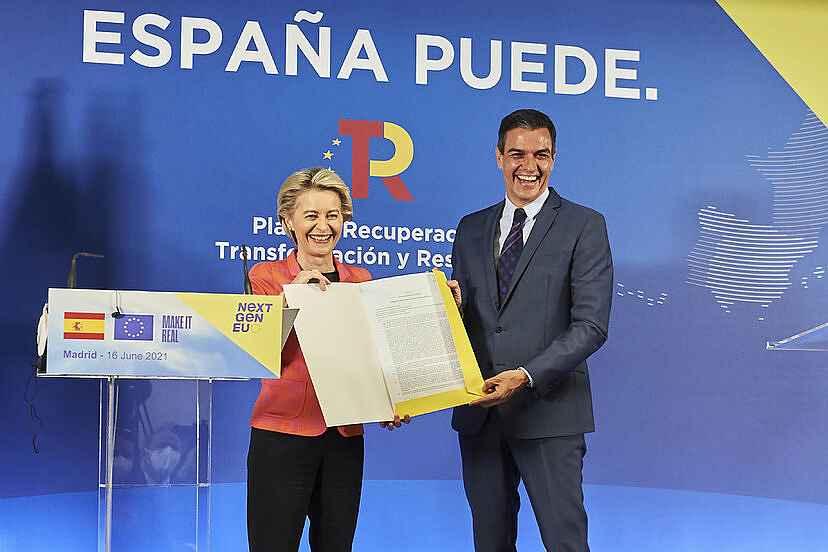 The President of the Government defends that economic growth makes it possible to maintain "cautious optimism" and calls for the implementation of the Recovery Plan as an antidote to international uncertainty.

One more year, the publication of the special issue of Expansión for its anniversary allows us to see to what extent the frenetic pace of the events that we are living through has turned the economic policies of the countries into a strenuous exercise in managing the unexpected.

Reviewing the analyzes carried out in the last three years will reveal the extreme volatility of the economic contexts due to extreme causes. Just a few months ago, this forum would have reflected the remarkable solidity with which Spain emerged from the crisis caused by the Covid-19 pandemic, thanks to the extraordinary protection measures taken during the emergency, the achievement of the historic European agreement for recovery and to a particularly successful vaccination campaign.

Once again an unusual event, an unjustifiable war at the gates of Europe, forces us to reformulate the scenario from the utmost urgency. We must now face the disproportionate rise in energy prices and the bottleneck in the production of key raw materials, without being able to calculate how long this triggering event will last.

The most direct consequence for our economy has been inflation. The war has exacerbated the tensions caused by the problems in the supply chain after the passage of the pandemic, giving way to inflation derived from the cost of energy that clearly affects the perspectives from which we started. Despite the uncertainty at the moment, estimates from national and international institutes indicate that inflation in Spain could grow by close to 6% this year, approximately four percentage points more than expected at the end of 2021.

Faced with such a situation, the imperative was to act early, effectively and ambitiously, facing the very origin of the problem. In this sense, I would like to highlight the enormous success of the implementation, together with Portugal, of the electricity price cap mechanism, which will protect our production system and our homes from the runaway prices caused by the war context.

To this we add the decisive measures contained in the National Plan for Response to the Economic and Social Impact of the War, such as the discount of a minimum of 20 euro cents per liter of fuel, the suspension or reduction of taxes on electricity, the extension of the electricity social bond, guarantees from the Official Credit Institute worth 10,000 million euros or direct aid to sectors especially affected such as agriculture, fishing or electro-intensive industries.

There is one fact that I think it is necessary to underline: these measures clearly converge with the axes of the recovery process that was already underway when the conflict in Ukraine broke out, allowing for a fundamental continuity in our economic policies. And the clearest example of this is the obligation to urgently reduce energy dependence, reinforcing the transition to a green economy as quickly and completely as possible.

That is to say: the uncertainty of the international economic situation triggered by the invasion of Ukraine not only does not modify the main lines of European recovery, but also reinforces the need to maintain the momentum that develops them.

Therefore, an optimal way to nurture the confidence that we so much need at this time will be to redouble the efficiency and diligence with which we are managing to implement the Recovery, Transformation and Resilience Plan, and which has made Spain the most advanced country in the management of the Next Generation EU funds. We were the first, along with Portugal, to deserve final approval of the plan; the first to receive a disbursement linked to the achievement of milestones and objectives, and now we are also the first to request the second disbursement.

There is no doubt that managing such a volume of resources in such a short period of time is a gigantic challenge. Despite this, the Public Administration has been mobilizing funds at an unprecedented rate. It is enough to remember that, throughout these ten months that have elapsed since the approval of the plan, more than 30,000 million euros have been authorized, of which more than 12,000 have already been paid, with currently more than 17,000 projects benefiting from the funds of the plan.

However serious the circumstances, we cannot slow down the execution of this mechanism for a second, on which a new and successful modernization of Spain depends. Nor does it stop the implementation of the 102 structural reforms linked to their execution, because they mean eliminating several of the economic and social burdens that our country has dragged on for decades.

There is no clearer example than that of the labor reform, agreed by the Government and the social agents and launched at the end of 2021. In just a few months, we have managed to go from signing an indefinite contract for every 10 temporary workers to , according to April data, the ratio is practically one to one. In April, 48.2% of the contracts signed were permanent. This figure is even more valuable if one takes into account that it has been achieved with a powerful job creation: for the first time in history, Spain has reached 20 million Social Security affiliates.

Therefore, there are three pillars that allow confidence to be based on the good work of Spain in these times of uncertainty: justice and timeliness of the measures in the face of successive emergencies; the leadership and optimal development of our national recovery plan; and the advancement of a reformist agenda of great structural depth. The extraordinary news in the labor market, the palpable recovery of the tourism sector to levels already very close to those of 2019, and growth forecasts of over 4%, one of the highest in the eurozone, are data that should confirm this cautious and objective optimism.

The Government well understands the tiredness of our society due to the tests to which it is being subjected. But I want to reiterate my conviction that the turmoil will pass. A democratic, modern, sustainable Europe with a presence in the world will prevail against Putin's authoritarian and imperialist delirium.

And Spain will advance with renewed firmness along the path of progress and transformation that we have begun, giving way to a new and lasting time of prosperity for our country.

‹ ›
Keywords:
Especiales36aniversarioEconomíaPedro SánchezPIBAniversario Expansión
Your comment has been forwarded to the administrator for approval.×
Warning! Will constitute a criminal offense, illegal, threatening, offensive, insulting and swearing, derogatory, defamatory, vulgar, pornographic, indecent, personality rights, damaging or similar nature in the nature of all kinds of financial content, legal, criminal and administrative responsibility for the content of the sender member / members are belong.
Related News