With 12 domes, the Bure plateau radio telescope is complete

Any visitor to the NOEMA observatory (Northern extended millimeter array) completes the journey on foot and at an altitude of 2,550 meters which leads to an alignment of domes sparkling in the sun, in a mineral setting dotted with rare tufts of grass and still virgin of snow. 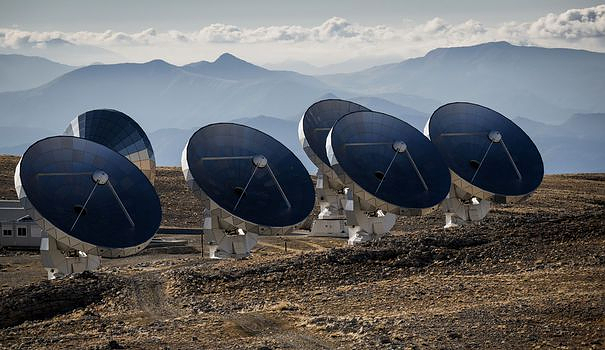 Any visitor to the NOEMA observatory (Northern extended millimeter array) completes the journey on foot and at an altitude of 2,550 meters which leads to an alignment of domes sparkling in the sun, in a mineral setting dotted with rare tufts of grass and still virgin of snow.

The installation has already allowed "considerable advances in astronomy, such as the vision of the hearts of galaxies", explains, in the little icy wind which sweeps the plateau of Bure (Hautes-Alpes), Frédéric Geth, astronomer and deputy director of the Institute of Millimetric Radio Astronomy (Iram).

Created in 1979 on the initiative of the German Max Planck Institute and the National Center for Scientific Research (CNRS), Iram was later joined by the Spanish National Geographic Institute (IGN). Its flagship has long been the large Pico Veleta radio telescope in Spain, with its cupola 30 meters in diameter.

Size matters in millimeter radio astronomy for picking up extremely weak electromagnetic wave signals. A galaxy, for example, emits these waves in frequencies ranging from X-rays, the most energetic, through visible light, to radio waves, the lowest in energy (millimeter and centimeter).

Radio waves are those of the "cold" Universe, that is to say "everything but the stars", and this is the realm of NOEMA.

Bure's aluminum domes are only fifteen meters in diameter, but their resolving power lies partly in their number, which has increased from six in 2014 to twelve since this year, and partly in their configuration.

Mobile, despite their 120 tons each, they are arranged on two tracks forming a T.

This is the trick of the observation technique by interferometry: it consists in pointing at exactly the same moment the same object in space with several cupolas, which form a virtual cupola as large as the distance separating the furthest from the one from the other.

It is then up to the correlator, a modest-looking supercomputer housed in a small room in the observatory, to combine the signals received using skilful calculations to restore a single image.

Winter sees the arrangement of domes stretch out in its wide configuration, with a maximum distance of 1.7 km. This is the "main moment of observation, when the atmosphere is ideal, with dry, cold and stable air", explains Frédéric Geth.

The installation revolves around an imposing maintenance hall which houses NOEMA's small control room. A cable car, reserved for equipment, carries the equipment necessary for the maintenance of the domes, and the supply of the permanently inhabited living base.

Access to the base is via a corridor sheltering from bad weather and snow that will soon cover the plateau.

The domes are monitored like milk on the fire, with a heating system so that neither ice nor dew disturbs their observations.

In the control room, André Rambaud, an operator, controls their pointing in front of a bank of screens. "Let's go for the observation of eight galaxies, which are ten or twelve billion light years away and which the cupolas will follow for five hours", he says with a smile.

The on-call astronomer, Edwige Chapillon, from Iram, chooses the order of observation of the projects that have been accepted - up to nearly 500 per year - "according to their nature and the time that 'he does".

NOEMA's science isn't the sexiest, as its astronomers agree. It's hard to compete with the general public with the breathtaking images of the new James Webb Space Telescope, for example.

But this "formidable time machine", as Edwige Chapillon, a specialist in extra-galactic observations, calls it, brings decisive advances to the understanding of the Universe.

The Iram observatories have discovered almost half of the known interstellar molecules, "the building blocks of life in the Universe", remarks the astronomer.

And it is thanks to NOEMA that astrophysicists have precisely determined the temperature of the young Universe, less than a billion years after the Big Bang.

And the Iram network is part of the EHT (Event Horizon Telescope) collaboration, bringing together the main radio telescopes in the world (including Alma in the southern hemisphere), which produced the first images of black holes. NOEMA joined the network in 2021 and will easily find its place there.