A piece of cardboard in an urn, and a whole world that rocks. 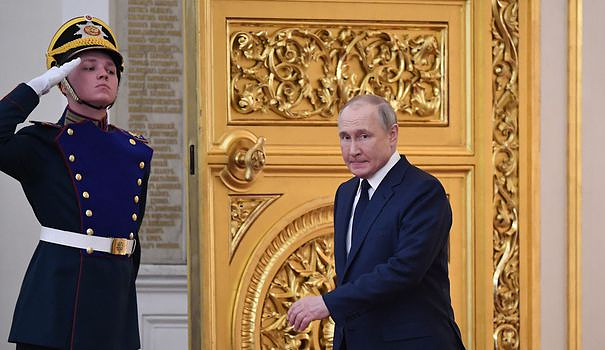 A piece of cardboard in an urn, and a whole world that rocks. This Tuesday, September 20, the Russian occupation forces have announced that they are organizing a referendum in four Ukrainian regions. After a tour intended to restock weapons, Vladimir Putin, in a televised address on Wednesday, announced a partial military mobilization in Russia. The United Nations General Assembly has highlighted the divisions of the world. In a speech on Tuesday evening, Emmanuel Macron denounced "Russian imperialism", which "fractures" the planet.

It was said to be cornered, constrained by the Ukrainian advance which recovered several thousand occupied square kilometers. This Wednesday, Vladimir Putin announced the partial military mobilization, to strengthen his "special operation" in Ukraine. From today, “citizens who are on the lists of reserves must be mobilized, and especially all those who have related military experience,” he said.

The authorities installed by Moscow in four regions of Ukraine announced on Tuesday that they wanted to organize referendums. The question asked? For or against becoming Russian. Thus the regime hopes to legitimize its presence and its control in Lugansk, Donetsk, Kherson and Zaporijia. On the model of the one which formalized the annexation of the Crimean peninsula (south) by Russia in 2014, denounced by Ukraine and the West, these votes have been the subject of preparations for several months.

Putin had first rejected the initiative, at the time of the Ukrainian counter-offensive, which allowed kyiv to take back thousands of square kilometers in the territories in question. Russian officials had previously mentioned the date of November 4, the day of Russian national unity. The Kremlin seems to have accelerated. These referendums are announced from September 23 to 27. Ukraine immediately warned that the Russian threat would be "liquidated", the head of the Ukrainian presidential administration, Andriï Iermak, denouncing a Russian "blackmail" motivated by "the fear of defeat".

In addition to putting strong pressure on the Russian occupier in Kharkiv, the Ukrainian army is also conducting a counter-offensive on the Kherson region in the south and another in the direction of the Lugansk region, which Moscow had conquered in its all in the spring at the cost of months of bloody fighting. kyiv thus hopes to retake the village of Bilogorivka, the conquest of which had cost Russia dearly in May, its forces having been decimated while trying to cross the Siverskiï Donets river there. The images of destroyed tanks had gone around the world. About twenty kilometers away, from Siversk, Ukrainian artillery bombarded Russian positions.

Vladimir Putin met on Tuesday with arms manufacturers and security officials. The goal? “Accelerate production capacities” to “as quickly as possible deliver the necessary armaments” to his army, he demanded. Receiving the credentials of new ambassadors, he insisted on the merits of his "sovereign" foreign policy. At the same time, the lower house of the Russian Parliament passed a text considerably toughening the prison sentences incurred by soldiers who surrender to the enemy, desert or commit looting.

French President Emmanuel Macron lambasted before the United Nations General Assembly "a return to the age of imperialism and colonies", shortly after calling the polls announced by Russia a "parody". In a sometimes fiery plea, cutting with the general tone, the French head of state tried to erase the idea of ​​a regional war resulting from the opposition between Westerners and Russians, while underlining the aggression carried out by Cheese fries.

"Contemporary imperialism is not European or Western and takes the form of territorial invasion backed by globalized hybrid warfare that uses the price of energy, food security, nuclear safety, access to information and population movements as weapons of division and destruction", denounced Emmanuel Macron. And to urge to do everything to stop the conflict: "We all have a role in putting an end to it because we all pay the price."

In recent months, the French president has regularly scolded countries that have remained neutral, notably during a July visit to Cameroon where he denounced the silence in the face of Russia's "hybrid presence" in Africa, particularly in Mali. In the longer term, Emmanuel Macron warns that this "attempt to partition the world (...) reinforces the tension between the United States and China", particularly in the Indo-Pacific zone, one of the strategic priorities of the France. And is alarmed by "the fracture of the world".

EU member countries, except Hungary, presented a draft resolution on Tuesday asking the UN to appoint an expert to monitor the human rights situation in Russia. The text, a copy of which was read by AFP and which should be voted on by the Human Rights Council in early October, expresses serious concern "at the significant deterioration of the human rights situation. 'Man in the Russian Federation'.

The appointed expert will be expected to "collect, review and assess relevant information from all stakeholders" and submit a written report to the Human Rights Council (based in Geneva) within one year, as well as a report to the General Assembly in New York. Even before this draft text is published, the Russian mission in Geneva sent a letter to European countries on Tuesday, urging them to "reject this politically biased and baseless initiative".