Ukraine, including its capital kyiv, was largely deprived of electricity and water on Thursday, the day after new massive Russian strikes that specifically targeted energy infrastructure, a strategy described as "war crimes" by Western allies in when winter sets in. 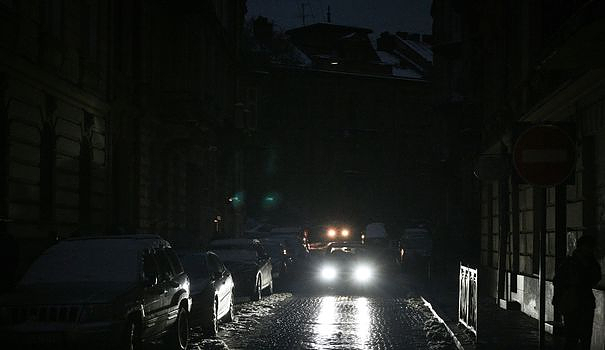 Ukraine, including its capital kyiv, was largely deprived of electricity and water on Thursday, the day after new massive Russian strikes that specifically targeted energy infrastructure, a strategy described as "war crimes" by Western allies in when winter sets in. President Zelensky announced in his evening speech that the country was working on repairing the electricity network, in kyiv and in all the other provinces affected by the Russian bombardments, including Kherson.

On Thursday, at least four people died in Russian offensive shelling in Kherson. On Wednesday, ten people lost their lives in kyiv and fifty were injured after bombings on infrastructure.

France has announced a new component of aid to Ukraine, including generators to help the country plagued by power outages to hold out this winter.

Ukraine was working on Friday to repair energy infrastructure damaged by massive Russian strikes and to resupply millions of Ukrainians without heat and light as winter sets in. President Volodymyr Zelensky said Moscow's new strategy to plunge Ukraine into darkness would not weaken his country's resolve. "It's a war of strength, of resilience, it's about who is the strongest," he said in an interview with the Financial Times published on Friday.

About fifteen regions encountered problems with the water and electricity supply. "The situation with electricity remains difficult in almost all regions. However, we are gradually moving away from blackouts and every hour we are reconnecting electricity for new consumers," Zelensky also said in his speech Thursday evening. In kyiv, hit by freezing rain falling on snow and near freezing temperatures, 60% of the population were still enduring power outages, according to the town hall, but were gradually seeing the lights come back on. Three nuclear power plants under the control of the capital were able to be reconnected on Thursday.

In the Kharkiv region, the country's second city, not far from the border with Russia, the supply has been restored after "very difficult" work, said its mayor Igor Terekhov. "We have withstood nine months of total war, and Russia has not found a way to break us. And it will not. We must continue to hold our ground," Zelensky said in his evening speech. .

At least four people were killed and 10 injured on Thursday in a Russian bombardment of the southern Ukrainian city of Kherson, from which Moscow troops withdrew two weeks ago, the governor said. "The Russian invaders opened fire on a residential area using multiple rocket launchers. A large building caught fire," Yarovslav Yanushevich, head of the Kherson military administration, said on Telegram.

Russian bombardments on Ukrainian infrastructure on Wednesday left at least ten dead and fifty-one injured, and led to massive power and water cuts, mainly in the capital, kyiv. According to the Ukrainian Air Force, Moscow fired about seventy cruise missiles at Ukraine, fifty-one of which were shot down, and sent five suicide drones.

French diplomacy announced on Wednesday "to strengthen its mobilization for the benefit of the Ukrainian people". Before detailing its aid: "In response to Ukraine's appeal, the Ministry for Europe and Foreign Affairs is currently sending 100 generators with a power of 50 to 100 KWA to Romania. These generators will be given to Ukrainian authorities in the coming days". This transport, organized by the crisis and support center of the Ministry for Europe and Foreign Affairs, benefits from the support of the European Union's civil protection mechanism and is part of a dispatch operation over 500 generators by several EU countries.

This new aid in the energy field complements the various shipments of electricity generators made since the start of the war. 85 generators have already been sent from France to Ukraine and Moldova.

The International Council of Museums (ICOM) published Thursday an "Emergency Red List of cultural property at risk" in Ukraine, to fight against illicit trafficking, "amplified by the Russian invasion". With this list, ICOM hopes to serve as an effective reference for "the identification of looted and stolen cultural objects in Ukraine when they begin to circulate in the weeks, months and years to come", he explains in a statement. On his list are notably manuscripts dating from the 13th to the 19th century, ancient religious icons but also modern drawings and paintings, from the naive, avant-garde and socialist realism movements, as well as handicrafts, costumes and jewelry.

Its initiative "comes at the right time in the fight against the illicit trafficking of Ukrainian cultural heritage - a phenomenon that has existed for a long time in the region and which has been amplified by the Russian invasion", underlines this international network of museum professionals, which covers nearly 140 countries. "Indeed, recent reports on the massive looting of the Oleksiy Shovkunenko Museum of Art in Kherson by Russian troops retreating from the city on November 11, demonstrate that this threat is present and systematically carried out", continues ICOM .

To fight against the illicit traffic of cultural heritage, ICOM, founded in 1946, collaborates with international organizations such as Interpol and the World Customs Organization (WCO). In Ukraine, the United Nations is using satellite imagery to monitor the destruction of cultural property and heritage inflicted by the Russian offensive. UNESCO, the UN agency responsible for Culture, had recorded, at the end of October, 207 cultural sites damaged since the start of the Russian invasion on February 24.