War in Ukraine: many homes still without electricity, "restrictions are maintained"

Two weeks after the forced withdrawal of Russian troops from Kherson, fighting continues in the area. 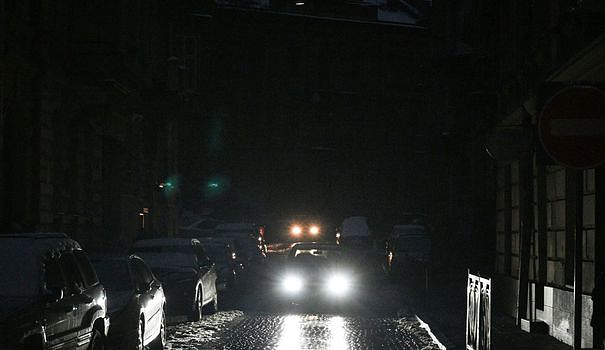 Two weeks after the forced withdrawal of Russian troops from Kherson, fighting continues in the area. Fifteen civilians died Friday in a Russian bombardment on this strategic city, while millions of homes are without power across the country due to strikes from Moscow. Russia's strategy of targeting critical infrastructure as Ukraine plunges into winter temperatures is a "war crime" for Ukraine's Western allies, and branded a "crime against humanity" by Ukrainian President Volodymyr Zelensky.

The withdrawal from Kherson, which Moscow hoped to make its base in occupied southern Ukraine, has reshuffled the cards in this nine-month war. The city is strategically located to connect the Crimean peninsula, annexed by Russia since 2014, and the Ukrainian port of Odessa to the west.

More than six million Ukrainian homes were affected by power cuts on Friday, two days after massive Russian strikes, according to Volodymyr Zelensky. "Tonight, cuts continue in most regions and in kyiv," added the head of state in his daily address. On Friday evening, the electricity network had lost "30%" of its capacity, the operator Ukrenergo said on Telegram, while this lack was "15 to 20%" on Wednesday morning.

"We expect to go through the weekend with a deficit of around 25%. This figure is already close to that before the last attack, but still a bit too large. Therefore, the timetables for the restrictions will be maintained", specified the operator. Russia, for its part, claims to only target military infrastructure and has blamed the power cuts on the Ukrainian anti-aircraft defense. The Kremlin assured that Ukraine could end the suffering of its people by accepting Russian demands.

Russian President Vladimir Putin met soldiers' mothers for the first time on Friday, saying he shared their "pain" and called on them not to believe the "lies" about the offensive launched on February 24. The head of the Kremlin attacked "enemies in the information field" who seek, according to him, to "devalue, discredit" the Russian offensive in Ukraine. "We have to achieve our goals, and we will achieve them," he said.

Russian diplomacy also denounced the resolution of the European Parliament which qualified, this week, Russia as a "State promoter of terrorism" and a "State which uses terrorist means", in a text adopted in Strasbourg by 494 votes. for (58 votes against and 44 abstentions). Moscow claims that this decision "has nothing to do" with the fight against terrorism. The decision of the European Parliament is at this stage above all symbolic, in the absence of an adequate legal framework in the EU, unlike the United States.

Ukraine will boycott the work of the OSCE assembly, after the Organization for Security and Cooperation in Europe did not change its rules to exclude Russian representation, according to Ukrainian MP Yevgeniya Kravchuk.

Responding to a question from the Finnish newspaper Helsingin Sanomat, the leader of the Russian mercenary group Wagner, Evgueni Prigojine, said on Friday that a "former general" of the American Marines was part of this private army whose recruits fight in particular in Ukraine. "I have a very good opinion of the Finns on the battlefield. They fight in a British battalion (part of Wagner) which is commanded by an American citizen, a former general in the Marine Corps", revealed the Russian businessman, quoted by the press service of his company Concord.

Evgueni Prigojine, who was nicknamed "Putin's cook" because of his catering group's contracts with the Kremlin, has the reputation of having become a billionaire thanks to the public contracts he obtained. It is subject to sanctions from the European Union and the United States. In September, he revealed for the first time that he had founded Wagner in 2014 to fight in Ukraine, and acknowledged the presence of the organization of mercenaries in Africa, the Middle East and Latin America.

For years Wagner has been suspected of playing a role in furthering the Kremlin's ambitions, including in Ukraine where fighters from the paramilitary group have been at the forefront of the offensive. At the beginning of November, Wagner opened its first HQ in Saint Petersburg, Russia's second city.

French Head of State Emmanuel Macron has no meeting scheduled with his Russian counterpart Vladimir Putin before his state visit to the United States which will take place next week, the Elysee Palace said on Friday. “His conversations with President (Vladimir) Putin are not indexed to those he may have with President (Joe) Biden,” commented an adviser to the president. Emmanuel Macron will arrive in Washington on Tuesday evening for a state visit.

The adviser to the presidency assured that an interview would take place "rather quickly", while specifying that no date had yet been fixed. In mid-November, the Elysee had indicated that Emmanuel Macron would call Vladimir Poutine after the G20, which took place on November 15 and 16 in Indonesia. Then, on Wednesday, the French head of state declared that he intended to have "direct contact with him (Vladimir Putin) in the coming days on the subjects of civilian nuclear power in the first place and the Zaporijia power plant". The last official meeting between the two presidents dates back to September 11.

Emmanuel Macron wishes to remind his counterpart of France's demands: "that Russian troops leave Ukraine and that the sovereignty and territorial integrity of Ukraine be restored", explained the Elysée. He is also working to secure the Zaporizhia nuclear power plant occupied by the Russians, "which has already been at the heart of an interview, even two interviews with President (Vladimir) Putin", it was added. “What we understand is that there is an agreement in principle from the Russians to set up this protection zone, but the modalities are quite delicate and there is still work to be done,” said the counselor.

With regard to a way out of the conflict via negotiations, a French diplomatic source believes that neither of the two parties "has a real desire to negotiate", because they are for the time being "convinced of regaining the advantage over the field in the coming months". For the Russian and Ukrainian authorities, "it is the time of war and not the time of discussions or diplomats", continued the diplomatic source. Which concludes: "we are convinced that this conflict will last."