The Ukrainian president welcomed, Friday, October 21, the "good results" of his army against Russian troops in the region of Kherson, in the south of the country. 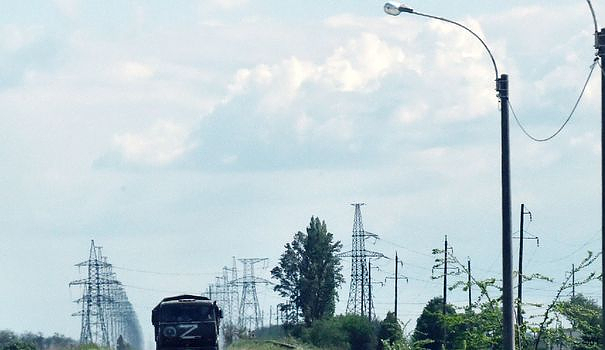 The Ukrainian president welcomed, Friday, October 21, the "good results" of his army against Russian troops in the region of Kherson, in the south of the country. kyiv claims the recovery of dozens of localities and the recovery of Russian weapons.

kyiv has claimed new advances in the strategic region of Kherson, a city in southern Ukraine from which Russia began to evacuate the civilian population on Friday, the day the American and Russian defense ministers spoke by telephone.

Ukrainian President Volodymyr Zelensky welcomed Friday evening, in a video, the "good results" of his army in this region where, he said, more than thirty Russian armored vehicles were captured. Pro-Russian forces urged civilians to move to the left bank of the Dnieper in the face of the Ukrainian counteroffensive. The pro-Russian administration plans to evacuate "50,000 to 60,000" people in a few days.

Pentagon chief Lloyd Austin and his Russian counterpart Sergei Shoigu spoke on Friday for the first time in months, Washington ensuring at the same time that the Kremlin did not see any desire for a discussion aimed at stopping the war in Ukraine.

In rare phone call, Lloyd Austin stressed 'the importance of maintaining channels of communication' as the West fears a possible mad rush by President Vladimir Putin to use atomic weapons in the ongoing conflict , according to the US Department of Defense.

The Pentagon did not provide further details of their conversation. But the Russian ministry had specified earlier that the two men had discussed “several current issues of international security, including the situation in Ukraine”. Lloyd Austin also spoke with Ukrainian Defense Minister Oleksiy Reznikov, reiterating "the unwavering commitment of the United States to support Ukraine's ability to counter Russian aggression."

France, the United Kingdom and Germany demanded Friday, in a letter addressed to the UN, an "impartial" investigation into the Iranian drones supplied according to the West to Russia in its war against Ukraine. “An investigation by the UN Secretariat team responsible for the implementation of Security Council Resolution 2231 would be welcome and we are ready to support the work of the Secretariat to carry out its technical and impartial investigation,” notes the letter consulted by AFP.

Resolution 2231 of 2015 frames the now moribund Iranian civilian nuclear deal between Tehran, Russia, China, Germany, the United Kingdom and France, which at the time provided for a gradual lifting of economic sanctions against the 'Iran.

Ukrainian President Volodymyr Zelensky on Friday accused Russia of "deliberately" delaying the passage of ships loaded with Ukrainian grain, a vital supply for many countries in Africa and Asia. "More than 150 ships are in a queue to fulfill contractual obligations to supply our agricultural products. This is an artificial queue, which has arisen only because Russia deliberately delays the passage of ships “, Volodymyr Zelensky said in a video. According to him, China, Egypt, Bangladesh, Indonesia, Iraq, Lebanon or the Maghreb countries are among the states affected by these delays, which affect "about three million tons of food".

The use by Russia of nuclear weapons would be "an act of hostility against humanity", warned Saturday Japanese Prime Minister Fumio Kishida, visiting Australia. Russian intimidation over "the use of nuclear weapons is a serious threat to the peace and security of the international community and is absolutely unacceptable," said the leader of the only country ever struck by the atomic bomb.

In May 2023, Fumio Kishida is expected to welcome the leaders of the G7 countries to Hiroshima, hit by an American nuclear bomb on August 6, 1945, which killed 140,000 people. The Japanese city of Nagasaki was also targeted three days later. For the Japanese Prime Minister, this period of 77 years without recourse to nuclear weapons "must never end".

Ukraine on Friday called for an international observation mission at the Kakhovka dam, in the Kherson region (south) occupied by Russian forces, which kyiv accuses Moscow of having undermined. “We call on the UN, the EU and other organizations to organize an international observation mission from Kakhovka. International experts must arrive immediately (at the site), as well as Ukrainian personnel,” urged the Prime Minister , Denys Chmygal, during a government meeting.

According to him, a potential explosion of the dam of this hydroelectric power station "could cause several thousand victims and (cause) the flooding of dozens of localities". On Thursday evening, Ukrainian President Volodymyr Zelensky accused the Russians of having undermined the dam of this hydroelectric power station located in the Kherson region, under the control of Moscow forces who are facing a push from the Ukrainian army.