War in Ukraine: 22 people killed in a Russian strike on a railway station

Six months after the invasion of Ukraine by Russia, a Russian strike on Wednesday August 24, the day of the Ukrainian national holiday, at least 22 dead and dozens injured in a railway station, announced the president Volodymyr Zelensky. 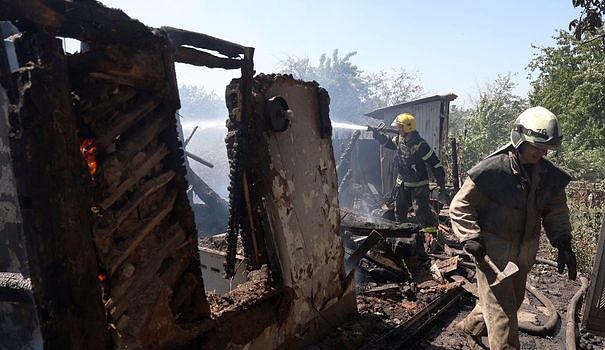 Six months after the invasion of Ukraine by Russia, a Russian strike on Wednesday August 24, the day of the Ukrainian national holiday, at least 22 dead and dozens injured in a railway station, announced the president Volodymyr Zelensky. "Today marks a sad and tragic milestone," said United Nations Secretary General Antonio Guterres, on the anniversary date of the outbreak - February 24 - of the fighting.

At least 22 people were killed on Wednesday by a Russian strike that hit a railway station in central Ukraine, according to a new report announced in the evening by Ukrainian President Volodymyr Zelensky. "At the moment there are 22 dead, including five people who burned in a car" and an 11-year-old boy, Volodymyr Zelensky said in his evening address.

"Search and rescue operations will continue," said the Ukrainian head of state. "We are going to make the aggressors pay for everything they have done. And we are going to drive them out of our land," he added.

In the seventh month of the war, kyiv intends to set up an international tribunal next year to try Russian President Vladimir Putin and those responsible for the invasion of Ukraine, the authorities revealed. AFP a senior Ukrainian official. This plan is overseen by Andriï Smirnov, the deputy head of the Ukrainian presidential administration.

"It's the only option to quickly hold the criminals who started the war against Ukraine accountable. The best, the fastest and the most effective," insisted in an interview with AFP Andrïï Smirnov. The "crime of aggression" is similar to the notion of "crime against peace" used in the Nuremberg and Tokyo trials at the end of the Second World War.

The International Criminal Court (ICC) has already begun to investigate the crimes for which it has jurisdiction - genocide, crimes against humanity and war crimes - but cannot take up charges of "crime of aggression" because neither Moscow , nor Kyiv have ratified the Rome Statute, establishing it in 2010.

An Albanian court ordered Wednesday, August 24, the continued detention of two Russians and a Ukrainian suspected of espionage. They were arrested last Saturday for attempting to enter an arms factory in Albania by force, injuring two soldiers. “The court is of the opinion that they must remain at the disposal of justice until the end of the investigation,” said the president of the court of Elbasan, Pajtime Fetahu, at the end of the closed-door hearing.

"They are suspected of having tried to steal military intelligence or any other type in order to deliver it to a foreign power, which undermines the independence of the country," he added. The three defendants, who risk ten years in prison, reject all charges and demand to be released without delay, according to their lawyers. One of the men attacked the guards who surprised him taking pictures of the Gramsh factory (center) where unused weapons are dismantled, Defense Minister Niko Peleshi explained on Sunday.

Moscow could announce as early as this week one or more "illegitimate" referendums in occupied Ukraine, in an attempt to justify an annexation of Ukrainian territories to Russia, White House spokesman John Kirby told reporters on Wednesday.

"We have information that Russia continues to prepare mock referendums" in Kherson (south), in Zaporijjia, in the separatist regions of Donetsk and Lugansk, as well as in Kharkiv. The Russian leadership has instructed to prepare for these referendums to be held,” he said. “In fact, we expect a Russian announcement on the first or first of these sham polls before the end of the week. “, added John Kirby.

“The United States and the international community have been very clear: any attempt to control sovereign territory of Ukraine will be considered illegitimate,” he continued. The United States expects Russia to "manipulate the results of these referendums to pretend that the Ukrainian people want to join Russia", further accused the American spokesman.

Industrial production in Russia fell 0.5% in July year on year, the official statistics agency said on Wednesday. However, this fall is lower than expected, which may suggest that the economy is adjusting to the sanctions. This figure, published by the Rosstat agency, means that industrial production, an indicator giving the temperature of the economy, down year on year, however increased by 1.8% compared to June 2022.

Among the most heavily affected sectors is automotive production, which recorded an 80.6% drop in July 2022 compared to July 2021. The volume of production, however, was up 44.5% compared to June 2022. These figures show that while Western sanctions targeting Moscow in the midst of an offensive against Ukraine continue to put the Russian economy under pressure, they have so far not had the devastating effect anticipated by some.

Threatened like other European countries by the energy crisis, Switzerland wants to reduce its gas consumption by 15% this winter, which it imports in full, the government announced on Wednesday, following in the footsteps of the EU. In a statement, the Federal Council (government) said it had "decided that Switzerland should now contribute, like other countries, to avoiding a situation of gas shortage as much as possible by taking voluntary measures".

The objective is to reduce gas demand by 15% during the winter semester - from October 2022 to the end of March 2023 - compared to the average consumption of the last five years. Brussels has already asked the 27 member countries of the European Union this summer - of which Switzerland is not a member - to reduce their gas consumption by 15% in order to jointly prevent a situation of shortage from arising and to guarantee a supply enough for the coming winter.