Two teenagers sentenced to 13 years and 10 years in prison for killing Alisha, 14

The young author, aged 15 at the time of the tragedy, was sentenced to 13 years' imprisonment, given the "extreme gravity of the facts" and "elements of personality", declared the president in a deliberation delivered publicly, after a closed trial. 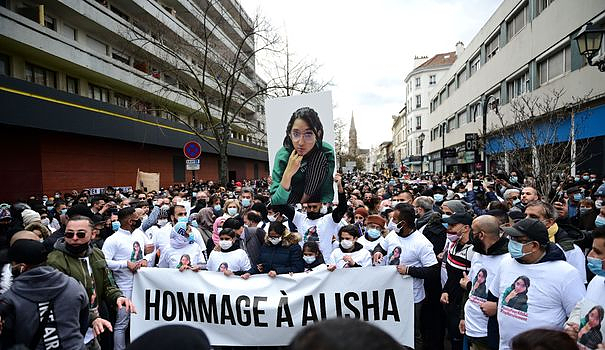 The young author, aged 15 at the time of the tragedy, was sentenced to 13 years' imprisonment, given the "extreme gravity of the facts" and "elements of personality", declared the president in a deliberation delivered publicly, after a closed trial.

His sidekick, also 15 years old at the time, was sentenced to 10 years in prison for murder of a minor under the age of 15, but the court of appeal ruled out premeditation concerning her.

Standing in the box, the two young people listened carefully to the deliberations, without showing any emotion. She in a very baggy blue sweater, sporting a fine mustache and black hair pulled up in a bun, their youthful attitude contrasting with this moment of gravity in a full courtroom.

"You both approached a beginning of reflection on the facts that you committed", declared the president of the court of appeal to the two authors, inviting them to "continue this work" to "get out of adolescence and become adults with a place in society".

"It will take effort, but you can do it," she added.

In hollow, this drama also bears the consequences of the failure of parental figures, chaotic journeys and broken childhoods, which have contributed to breaking down the chain of values ​​thanks to which young people are supposed to be built, agree the parties.

The Court of Appeal also underlined "the courage and dignity" of the victim's family during the hearing.

"Alisha she won today, we won," reacted her mother, her voice trembling, surrounded by her husband, one of their sons and many supporters.

"The worst thing for us is that she will never come back, we have to live with the fact that she is not there, but they will pay, they will really pay," she said. .

“We have today all together restored the true qualification to these horrible facts”, declared Me Jean Tamalet, the lawyer of the family of Alisha.

"The 13-year sentence is more or less practically consistent with what was pronounced at first instance so it remains subject to discussion and reflection" of a possible appeal in cassation, for his part slipped Me Frank Berton, the young man's lawyer.

Last April, the children's court of Pontoise (Val-d'Oise) sentenced them both to the same sentence, ie 10 years in prison. But he had reclassified the facts of assassination as murder, arousing incomprehension and the anger of the victim's family. The prosecution immediately appealed.

The four days of this second trial made it possible to refine the cogs that led to this meeting on March 8, 2021, in the shadow of the A15 viaduct.

Invited to go there by the young murderess, Alisha is struck by surprise by the other perpetrator, who strikes her with a shower of blows on the body and the head. While a barge points on the river, the two teenagers seize the body of the victim, still conscious, and throw it into the Seine. She drowned.

In the eyes of the Court of Appeal, Alisha's death is attributable to the two teenagers, who ultimately acted together. But the young man had matured and prepared his package, she said.

Classmates, these ninth graders had nevertheless befriended at the start of the school year, at the private vocational high school Cognacq-Jay in Argenteuil. Then the teenage fights, between love affairs, jealousies and rumors, had degenerated into fights and another hacking of Alisha's phone.

Faced with this escalation, the establishment had temporarily excluded the two accused for the harassment of the victim. Which was ultimately not enough to stop this disastrous spiral.