Two males have been added to the Sierra de Castril Natural Park. 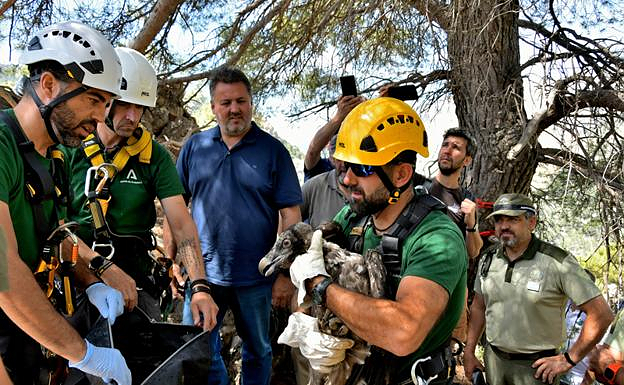 Two males have been added to the Sierra de Castril Natural Park. They join 22 others released in the protected natural area in Huescar, which borders the Sierra Cazorla Park or Las Villas in Jaen.

The Plan for the Recovery of Negrophous Birds of Andalusia of the Ministry of Agriculture and Sustainable Development includes the release of Jaca and Aragon. Manuel Francisco Garcia, the territorial delegate, attended the release. Miguel Perez, Miguel Perez and the Environmental Agents of protected natural areas, as well as technical staff from the Plan, were also present.

Hacking, a technique used in falconry, was chosen as the method for the release. This is a method that ensures that the released bird assimilates the area it was born in and returns to that area to reproduce and settle. Technical staff from the Ministry have created a rock cavity in the Sierra de Castril Natural Park where the chickens will be released. They will then be fed by their caretakers, without being seen, to avoid any contact with humans. They are fed with food until they take flight, which usually takes place around 20-30 days after release.

The Ministry has provided them with a GPS tracking system that allows them to track the movements of bearded vultures after they take flight. This system uses GPS transmitters to allow them to verify their dispersive movements in the Sierra Nevada and even the Pyrenees from the Natural Parks at Castril and Cazorla.

Andalusia is home to 61 percent of the bearded vulture chicks that were born in European centers that specialize in captive breeding this endangered species. The Bearded Vulture Breeding Center Guadalentin is the most successful in Europe. It is located in Cazorla Natural Park. Eight of the thirteen chickens have been released in Europe's five centers, while eight of them have made it to the Junta de Andalucia.

The territorial delegate also highlighted, in closing, the "great work done by the technicians of the Ministry and Environment Agents to guarantee the recovery a bird that was seriously endangered but that, thanks the efforts of these professionals returns to the Andalusian skies and lives in our natural spaces>>.

‹ ›
Keywords:
LiberadosPollosQuebrantahuesosParqueNaturalSierraCastril
Your comment has been forwarded to the administrator for approval.×
Warning! Will constitute a criminal offense, illegal, threatening, offensive, insulting and swearing, derogatory, defamatory, vulgar, pornographic, indecent, personality rights, damaging or similar nature in the nature of all kinds of financial content, legal, criminal and administrative responsibility for the content of the sender member / members are belong.
Related News