Trump investigations: what will change the appointment of a special prosecutor?

The path to the presidential election promises to be strewn with pitfalls for Donald Trump. 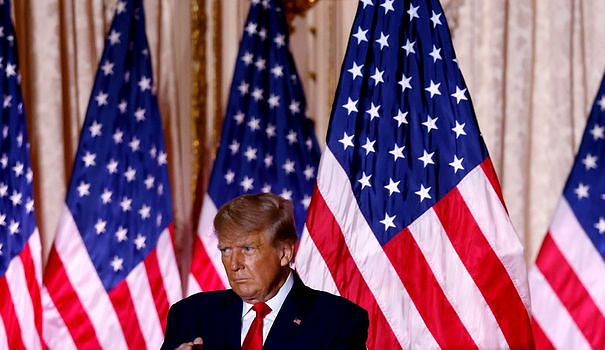 The path to the presidential election promises to be strewn with pitfalls for Donald Trump. He railed Friday night against the US Justice Secretary's appointment earlier in the day of an expert war crimes prosecutor to independently investigate the ex-president, three days after his declaration of candidacy. in the presidential election of 2024. During a televised address, Minister Merrick Garland entrusted this extremely "sensitive" mission to Jack Smith, a career prosecutor, who has worked for the prosecutor's offices in New York and Tennessee, as well as The Hague, where he notably coordinated war crimes prosecutions in Kosovo.

The former Republican president, who immediately denounced to Fox News journalists a "political" and "unfair" decision, rose again in the evening. "This terrible abuse of power is the latest in a long series of witch hunts that began a long time ago," he said during a speech from his Florida residence. He also denounced "the worst politicization of justice" in American history. "Why such anger? "The announcement marks a new step in the exceptional investigations into the former president and his allies, and comes as Trump is working on his campaign to win back the presidency,” Politico observed.

Furthermore, the appointment of a special prosecutor reflects the growing possibility that charges will be brought against him in one of the two cases. "Special prosecutors are semi-independent magistrates and offer the Ministry of Justice a shield against political considerations when issuing indictments", informs the British daily The Guardian.

If the former president fumes against such an appointment, it is also because Jack Smith is the ideal candidate to speed things up on this burning issue. In a statement, the prosecutor promised to act "quickly", "independently" and "thoroughly". Described by US Justice Minister Merrick Garland as a "seasoned career prosecutor", Jack Smith has been the lead prosecutor at the Special Court for Kosovo since 2018. “His experience and his curriculum vitae will allow him, at least initially, to fly over the political blows that the team of former special counsel Robert Mueller (in charge in 2017 of establishing whether there was had a collusion between his campaign team and Russia during the 2016 presidential election)", explains, in a portrait, the continuous news channel CNN.

"Jack Smith knows how to handle high-profile cases. He won't be swayed by anyone," warns Greg Andres, a former member of Mueller's team, who has known the prosecutor since the 1990s. to run for a new term and the intention of Democratic President Joe Biden to do the same, Merrick Garland judged "in the interest of the public" to instruct this prosecutor to resume two investigations carried out for months by American justice. “Throughout his career, Jack Smith has built a reputation as an impartial and determined prosecutor, who leads his teams with energy and application to track the facts, wherever they lead,” welcomed the American Minister of Justice.

An endurance that Jack Smith will need. The first investigation focuses on the Republican billionaire's efforts to change the results of the 2020 presidential election; the second on his management of the White House archives. After having gathered all the elements, the special prosecutor "will exercise his professional judgment independently to decide whether there should be an indictment", in one or the other of these files, specified Merrick Garland. However, the special prosecutor will only be responsible for making a recommendation: it will be up to the minister to decide. If he were to ultimately indict Donald Trump on this basis, his decision will be harder to attack.

The first investigation entrusted to him focuses on Donald Trump's efforts to contest his defeat in the 2020 presidential election, until the assault led by his supporters against the Capitol on January 6, 2021.,Sprawling, it has already involved the indictment of nearly 900 people who directly participated in the violence. So far, the prosecutions have focused on the Capitol riot itself. But, behind the scenes, there are indications that federal investigators will be looking more broadly at other schemes aimed at interfering with the transfer of power — including schemes involving those in the former president's inner circle.

The second investigation relates to the archives of the White House. Leaving the presidency, Donald Trump took entire boxes of documents. However, a 1978 law obliges all American presidents to transmit all of their e-mails, letters and other working documents to the National Archives. In January, he returned 15 boxes. After examination, the federal police estimated that he probably kept others in his luxurious residence in Mar-a-Lago, Florida. FBI agents conducted a spectacular search there on August 8 on the basis of a warrant for “withholding classified documents” and “obstructing a federal investigation”. They seized about thirty other boxes.

During his tenure, Donald Trump was also the target of two impeachment trials: one related to pressure on Ukraine to give him embarrassing material for Joe Biden; the other on his role in the attack on the Capitol. He was acquitted in both cases thanks to the Republican majority in the Senate.