The wage dispute for port workers has been resolved

After ten rounds of negotiations and an unprecedented series of warning strikes in the German North Sea ports, the Verdi trade union and the port companies have settled their wage dispute. 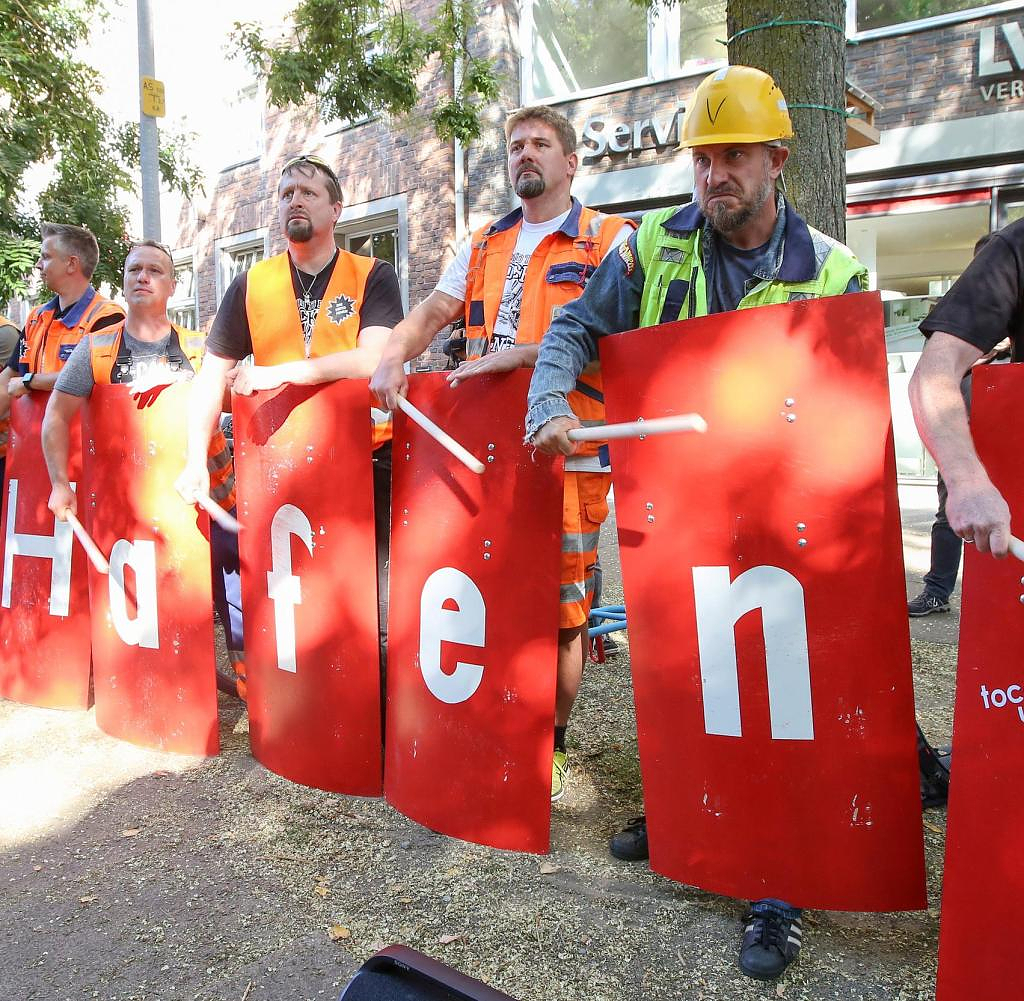 After ten rounds of negotiations and an unprecedented series of warning strikes in the German North Sea ports, the Verdi trade union and the port companies have settled their wage dispute. On Tuesday night in Bremen, the union agreed with the Central Association of German Seaport Companies (ZDS) on noticeable wage increases for the 12,000 employees this year and next. In addition, the agreement provides for adjustment rules should the currently extremely high inflation rate get out of hand in the coming year.

The union's Federal Collective Bargaining Commission, which represents employees from all types of companies, agreed to the agreement "relatively clearly", said negotiator Maya Schwiegershausen-Güth of the dpa. In view of the special nature of this round of wage negotiations, however, the union still wants to obtain the consent of the members in the companies concerned. The final decision of the collective bargaining commission is scheduled for September 5th.

The port logistics industry reacted with relief to the agreement and the approval of the Verdi tariff commission. "In a joint effort, we managed to find a compromise with the help of new instruments," said ZDS negotiator Ulrike Riedel. "We are now awaiting further decision-making at Verdi."

With the agreement, renewed industrial action in the ports is very likely off the table. Verdi most recently paralyzed goods and container handling there for 48 hours in mid-July. Before that, warning strikes had lasted eight and 24 hours, respectively, in June. In a leaflet to the workforce, after the end of the ninth round of negotiations, Verdi had brought up a vote on an enforced strike. There hasn't been such a violent tariff conflict in the ports for more than four decades.

A walkout would have hit the supply chains, which were already massively disrupted at the expense of the economy and consumers, at an inopportune time. Since the outbreak of the corona pandemic two and a half years ago, global container shipping traffic has been increasingly out of sync, meaning that urgently needed deliveries do not reach their destination on time. Every disruption, such as lockdowns in individual ports, an accident like that of the "Ever Given" in the Suez Canal or industrial disputes throws additional stumbling blocks and also reduces the punctuality of the ships.

According to Verdi, the collective bargaining agreement provides for wages in container companies in corner wage group 6 to increase by 9.4 percent retroactively to July 1; for conventional general cargo operations, the plus is 7.9 percent. "From June 1, 2023, the wages in the above-mentioned operating modes will increase by a further 4.4 percent," the union announced. "Should the price increase rate be higher, an inflation clause comes into force, which compensates for a price increase rate of up to 5.5 percent." ZDS did not provide any information about the details of the agreement.

According to Verdi, a negotiation obligation including a special right of termination was agreed in the event of a higher inflation rate. “Our most important goal was real inflation compensation so that employees were not left alone with the consequences of the galloping price increases. We succeeded in that,” said Schwiegershausen-Güth. The union originally entered the negotiations with a package of demands that, according to Verdi, would have meant wage increases of up to 14 percent over a period of 12 months.

According to observations by the Kiel Institute for Economic Research (IfW), the stubborn traffic jam of container ships in the German Bight has recently decreased significantly. "Instead of 24 container ships, "only" 17 are currently waiting to be cleared in Hamburg or Bremerhaven," reported IfW economist Vincent Stamer in the latest "Kiel Trade Indicator" on Tuesday. However, it is still too early to give the all-clear: "It is very unlikely that the traffic jam will continue to recede at this rate."

According to Stamer, some ships "apparently moved to Dutch sovereign waters as a waiting zone". Converted to the freight capacity, the dimension of the stowage volume is also still very high. Two percent of the global transport volume is currently standing still in the German Bight alone. "The waiting ships have a total capacity of 200,000 standard containers (TEU)", says Stamer. The IfW expert continuously analyzes worldwide container traffic at sea based on real-time data.

Because more than 90 percent of all goods worldwide are transported by ship, container shipping is a lifeline of world trade. Since the outbreak of the corona pandemic two and a half years ago, it has become increasingly out of step. Every disruption, such as lockdowns in individual ports, an accident like that of the “Ever Given” in the Suez Canal or labor disputes like the one currently taking place in the largest English container port, Felixstowe, causes additional problems and reduces the punctuality of the ships.

‹ ›
Keywords:
HamburgHHLAVer.di (Vereinte Dienstleistungsgewerkschaft)LauterbachJörnFelixstoweKarriereBremenZDSVerdi
Your comment has been forwarded to the administrator for approval.×
Warning! Will constitute a criminal offense, illegal, threatening, offensive, insulting and swearing, derogatory, defamatory, vulgar, pornographic, indecent, personality rights, damaging or similar nature in the nature of all kinds of financial content, legal, criminal and administrative responsibility for the content of the sender member / members are belong.
Related News