The tunnel project deviates significantly from what Musk had envisioned

Some of Elon Musk's craziest and most futuristic ideas got their start on Twitter. 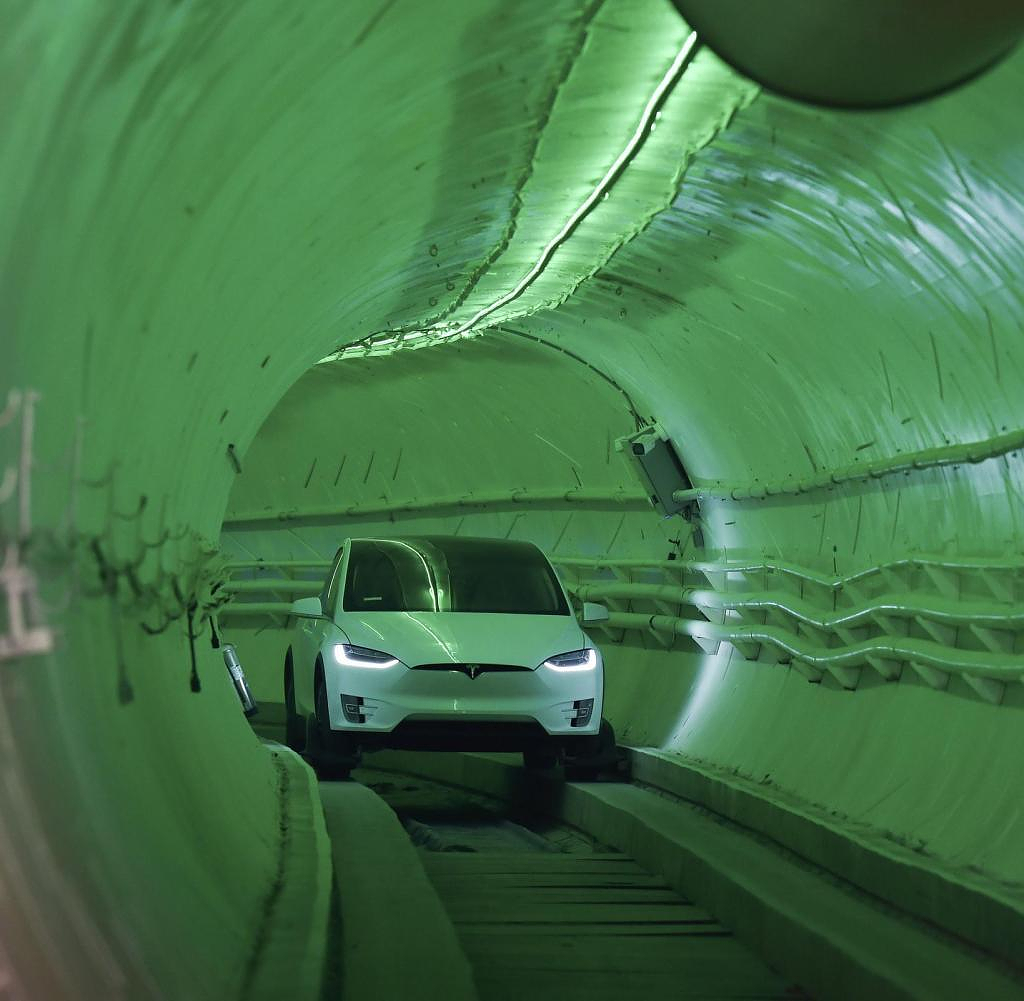 Some of Elon Musk's craziest and most futuristic ideas got their start on Twitter. "The traffic drives me crazy. I'm going to invent a machine to bore tunnels and then I'll start digging..." the magnate tweeted in December 2016. And so was born The Boring Company, building underground tunnels and ending traffic congestion in large cities Cities like Los Angeles should take care of that. Six years later, however, the only tunnels open to the public are just 1.7 miles long and lie beneath the Las Vegas Convention Center.

The so-called LVCC loop system is only used when large conventions are held, such as CES, the world's largest electronics trade show, taking place in the Nevada city this week. There are three stations in total: two on the surface and one underground. It's currently free to use, but several employees who were contacted feel it's entirely possible that a fee will have to be paid in the future. The company has not commented on this.

Music is playing in the LVCC West Station and some workers in yellow fluorescent vests are giving instructions to the CES attendees. "You can only go as far as Central Station because South Station is closed today," says one of them without explaining why. He then shows them where to wait for the car. If one is traveling alone, other passengers may accompany them in the back of the car. New cars drive into the station every few seconds. They come out of one of the tunnels and they are all white, black or gray Teslas.

Most drivers have a small pair of headphones in their ears, and some wear a hat that says "Vegas Loop". They greet the passengers in a friendly manner and ask where they want to go. "I'll save you a half-mile walk in about 30 seconds," says Bryan, an American driver who has worked for The Boring Company since June 2022. According to Google Maps, this distance between LVCC West Station and Central Station takes about ten minutes on foot.

Bryan says his job is just "wonderful": "I meet a lot of people and I drive a car that costs tens of thousands of dollars. It's also exciting to be part of something completely new.” From the LVCC West Station, it first goes down a hill and then into a circular tunnel. The ride, which consists of several straights and then a few gentle corners, is very short. Although Elon Musk had predicted in 2018 that the cars could travel at speeds of up to 240 kilometers per hour in the tunnel, the car only reached 36 miles per hour during the test. So around 57 kilometers per hour.

Stripes of light on the bottom and on the side, which change color again and again, give a futuristic touch to the tunnel, which then glows pink, green, blue or yellow. Sometimes other vehicles are seen along the way. These tunnels, which were built in just over a year with special boring machines, cost around 47 million dollars, according to The Boring Company. When you drive through, there is hardly any space left on the sides. Alberto Núñez, a Mexican who has been driving these cars for six months, assures that in an emergency any car can be brought out in five minutes. “Traffic will never stop here because one car can push another,” he explains. As he drives, Núñez keeps glancing at a screen in the front of the car. It shows images from the cameras outside the car, as well as other information such as speed, whether passengers are wearing seat belts or have poor visibility. For the driver, the main advantage of these tunnels for Las Vegas and other cities is that one can avoid the traffic of busy streets like the Strip.

It remains to be seen whether Elon Musk will manage to build these tunnels in other cities as well – projects already proposed in Los Angeles, Chicago and Baltimore have been abandoned again, according to various media reports. And the Las Vegas project deviates significantly from what Musk originally envisioned. As recently as 2018, the Tesla founder announced that the cars would be equipped with wheels that could adjust to the rails in the tunnel, but it seems he has scrapped that plan as well.

Musk had also assured when presenting a prototype of these tunnels in Los Angeles that only electric and autonomous vehicles can use them. However, currently all cars have a driver. Still, Núñez assures that one day you'll probably "walk out of the airport and a car with no one behind the wheel will take you where you want to go." "I suppose the service would be a lot cheaper without a driver because we have a lot here to do,” admits Bryan.

LVCC Loop started operations in 2021 and has been in action at all trade shows and conventions ever since, according to The Boring Company. At SEMA 2021, an automotive trade fair, the service transported "between 24,000 and 26,000 passengers per day". At last year's CES, "between 14,000 and 17,000 passengers used the service every day, with an average journey time of less than two minutes and a waiting time of less than 15 seconds". Steve Hill, president of the Las Vegas Convention and Visitors Authority (LVCVA), tweeted in 2021 that the system could carry around 4,400 passengers per hour.

Entrepreneur Elon Musk plans to build tunnel systems under US metropolises in which driverless vehicles will bring passengers from A to B at record speeds. The first test track has now been opened in Los Angeles.

John Merrill, a CES participant from Indiana, has already been driven through the underground tunnels in a Tesla Model 3. "It's a nice little tunnel system that I think could probably work in other cities like Barcelona," he says. Eddie Avila from Honduras says: "The only advantage is that you don't have to walk and it's very fast." He really likes to run, but he believes that such systems are needed in Las Vegas: "The traffic here is really stupid and it would definitely help us, for example, to get to the airport.”

Yeji Kim, who traveled from South Korea, emphasizes that it is much faster in these tunnels than on the road, since there are no traffic lights or any hotels. However, what he likes best is that they are electric cars "which seem to be very environmentally friendly". None of the trade fair visitors surveyed had any problems with the system. However, Kim also says that it is "difficult to determine possible disadvantages in a single trip".

This research was first published in the WELT partner newspaper "El País". Translated from Spanish by Bettina Schneider.

‹ ›
Keywords:
MuskElonTesla MotorsLas VegasTunnel
Your comment has been forwarded to the administrator for approval.×
Warning! Will constitute a criminal offense, illegal, threatening, offensive, insulting and swearing, derogatory, defamatory, vulgar, pornographic, indecent, personality rights, damaging or similar nature in the nature of all kinds of financial content, legal, criminal and administrative responsibility for the content of the sender member / members are belong.
Related News