The eternal secret of success of E.T.

The plot is straightforward: Aliens land as part of a research mission with their spaceship near Los Angeles. 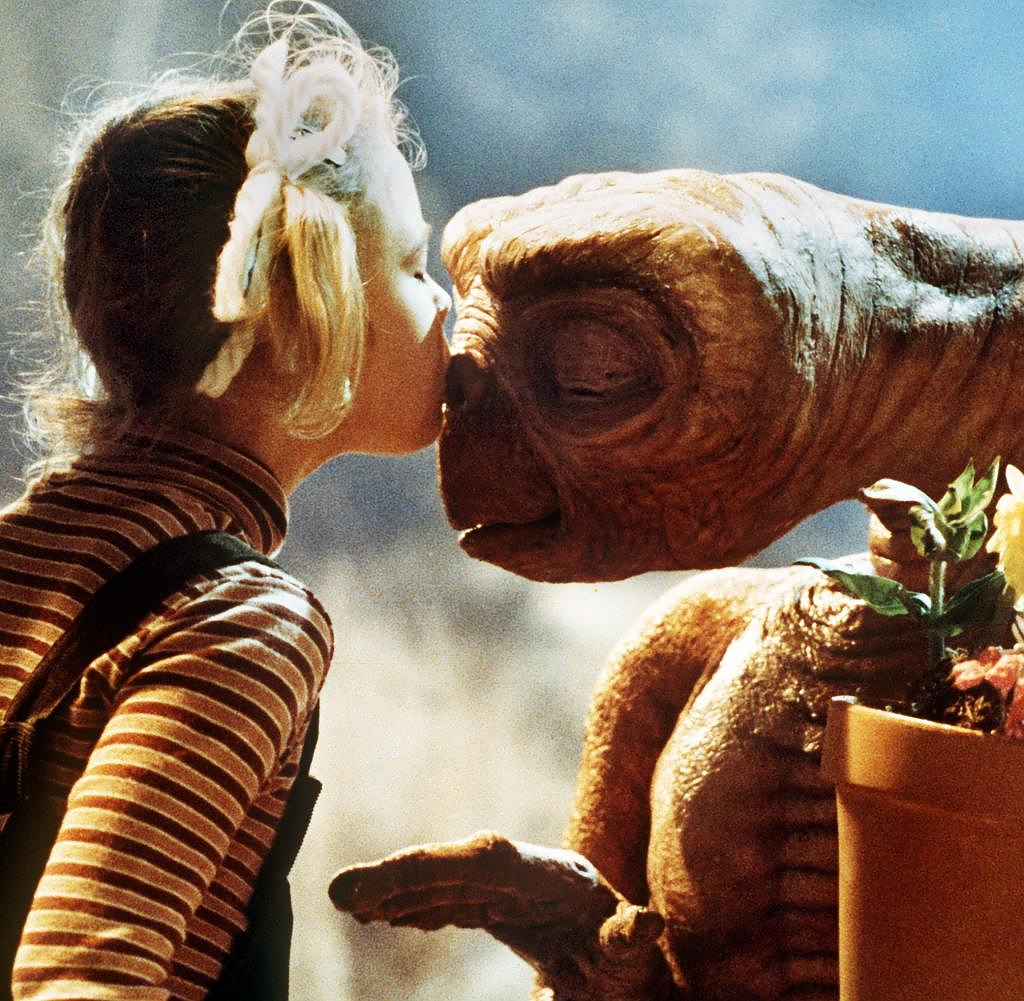 The plot is straightforward: Aliens land as part of a research mission with their spaceship near Los Angeles. People with flashlights interfere with their scientific work. Aliens flee. One is accidentally left behind. A boy takes care of the lost alien. Boy and alien become friends. Alien wants home. Alien returns home. Tears flow, closing music sounds.

After the blockbusters "1941 - Where Does Hollywood Please?" (1979) and "Raiders of the Lost Ark" (1981) Steven Spielberg's sixth feature film "E.T. - The Extra-Terrestrial" 40 years ago a comparatively small production for the director. The budget: only 10.5 million US dollars. There were no stars, no significant action and no interesting scenery. The main roles were played by a ten-year-old, a six-year-old and a remote-controlled doll. On paper, E.T. was a children's sci-fi film. Not much more.

One can assume that the commercial expectations of the work were not too high. But when "E.T." was shown on May 26, 1982 as the conclusion of the Cannes Film Festival, one could already guess that there was more at stake here. The premiere audience, which presumably included only a few children, couldn't stop celebrating the film. There was a standing ovation for 50 minutes. Almost a bit too long for the then 35-year-old Spielberg. He had to sit down from time to time.

On the occasion of the 40th anniversary, the ARTE documentary "'Phone home!' How E.T. Cinemas and conquered hearts" now in search of clues. How did the 115-minute work come about? What did it mean for -Spielberg, what for the viewers? And how did this incredible success come about? For ten years, "E.T." was the highest-grossing film of all time, until -Spielberg made "-Jurassic Park" (1993) and the friendly alien finally succumbed to overwhelming competition from 3D-animated dinosaurs.

For Spielberg, "E.T." was above all an affair of the heart. With a screenplay by author Melissa Mathison, the film mirrored his own childhood. Raised in suburban Arizona between an emotionally distant father and an overwhelmed mother, he recognized himself as Elliott, the lonely boy who lost his footing when his parents separated. While Spielberg was imaginative about his situation and started making films at the age of 12, 10-year-old Elliott (Henry Thomas) pragmatically takes care of a stranded alien - although the film makes little effort to bring E.T. missing out on even a remotely believable intergalactic identity. Instead, the alien is more of a metaphor for the unearthly. Equipped with all sorts of magical abilities, he landed on earth in a spaceship reminiscent of a Christmas tree ball.

It is true that "E.T." is undoubtedly a genuine family film that not only unfolds its magic in the cinema, but above all in front of the television at home - in the 1980s it was still the campfire of every household. But it is not considered a full Christmas film because the action is set around Halloween and it was released in US cinemas in the summer of 1982.

Since the rest of the world has had to wait until the holiday season, however, it is almost imperative to examine it more closely for its suitability for Christmas. The central motif of the film is the desire to return home or at least to call home, which could hardly be more Christmassy: "E.T. phone home,” he says excitedly in the original, pointing his bony finger at the stars. "Phone home", no matter how dysfunctional the situation at home may be. Thanks to E.T.'s longing for his home planet, Elliott also learns to appreciate his own home again and how it allows him to access his feelings in the first place. Suddenly the boy feels a connection to his environment and is full of empathy, with which E.T. has fulfilled him.

There are a total of 33 parallels between Jesus and E.T. , says the documentation - of which the ability to heal by laying on of hands and the glowing heart, which is known from iconographic depictions of Jesus, are already two. A third would be ET's resurrection, where he's not dead for three days, but maybe three minutes, which is enough to bring Elliott - and with him the viewers - to the brink of emotional distress.

Anyway, you can't think of a better Elliott than Henry Thomas. Whole dramas take place in his face during the two-hour film. The documentary features a wonderful snippet of an audition video in which Spielberg improvises a scene with Thomas, explaining that he has given E.T. have to take away. In the space of a minute, Thomas runs through everything from distraction to anger to despair. "Okay, kid, you've got the job!" Spielberg then says to him, to which Thomas wipes the tears from his eyes contentedly.

Spielberg chose Drew Barrymore to play Elliott's little sister, Gertie, when she told him at the audition with full conviction that at six years old she was the lead singer in a punk band - a qualification given to her in the scene where E.T. and Gertie yelling at each other, possibly benefited greatly.

Thomas and Barrymore star in the film - alongside E.T. of course, which is rather weak in expression compared to its human colleagues: the lids over the large eyes mostly at half mast, a strangely hydraulic neck, heavy folds and an awkward waddling gait. Whichever distant planet he may have traveled from, the technical development there must be so advanced that physical fitness has apparently fallen behind.

For Carlo Rambaldi, who designed E.T. In any case, since he was responsible, the director's instructions were: "Please ugly, but nice to look at for the duration of the film!" In fact, people wanted to keep watching it even after the film was over, which is why 15 million E.T. dolls were sold during the 1982 Christmas season alone. By 1998, the film's merchandise had grossed $1 billion.

When it comes to Spielberg's work, a common criticism is that it is manipulative in order to achieve the exact effect on the audience that the director has in mind. Aside from the fact that, hopefully, all directors will write, direct, shoot and edit their films with a thought for what they want to achieve from them, "E.T." is a paragon of cinematic efficiency.

From the moment Elliott and E.T. meet, virtually every scene is designed to emphasize the close bond between the two. The dead flower that blooms again because it serves as a symbol of their friendship, the scene where they fly by in front of the moon, Elliott on the BMX bike, E.T. in the front of the bicycle basket with the towel over his head.

As is so often the case in Spielberg's films, the soundtrack by John Williams contributes to this: if only melodic arcs are deceptive at first, it goes all out at the end. The film ends with a quarter-hour orchestra piece that leaves no questions unanswered. Slowly E.T. his finger against Elliott's forehead, where his fingertip suddenly lights up brightly. "I'll be here," he says before boarding the spaceship and flying home. Not a straight face remains. Not even 40 years later.

Shot from the hip

To help viewers connect more closely with the main characters, Spielberg adapted the film from E.T. and let Elliott spin. For the first 60 minutes, adults only emerge from the belly down; only the face of the mother can be seen.

Cut from the face

Anyone who has always wondered who E.T.'s facial features remind of - there are at least three answers: According to Spielberg, inspiration came from the US writer Carl Sandburg, to whom we owe the quote "Imagine, it's war and nobody goes there". , the German physicist Albert Einstein and an ordinary cat.

For the scene where Elliott E.T. tempted with sweets, Spielberg initially wanted M

Pulled at the butt

Pat Welsh, an elderly California lady who spent years preparing for the job on two packs of cigarettes a day, was hired for ET's raspy and resonantly raspy voice. She was thanked for her commitment with a fee of 380 US dollars - which, at the prices at the time, secured her consumption for the next three months.

Despite all the projections and mind games, Spielberg stated in no uncertain terms in an interview that E.T. is neither male nor female, but nonbinary, to use a more contemporary formulation. As can be seen in the wonderful wig and dress scene, E.T. also a sense of drag.

‹ ›
Keywords:
KinoBarrymoreDrewSpielbergStevenAußerirdischeNewsteam
Your comment has been forwarded to the administrator for approval.×
Warning! Will constitute a criminal offense, illegal, threatening, offensive, insulting and swearing, derogatory, defamatory, vulgar, pornographic, indecent, personality rights, damaging or similar nature in the nature of all kinds of financial content, legal, criminal and administrative responsibility for the content of the sender member / members are belong.
Related News