Yesterday, the Platform for Mobility between Poniente & Almeria examined in an emergency meeting the known deadlines for El Canarete's security. 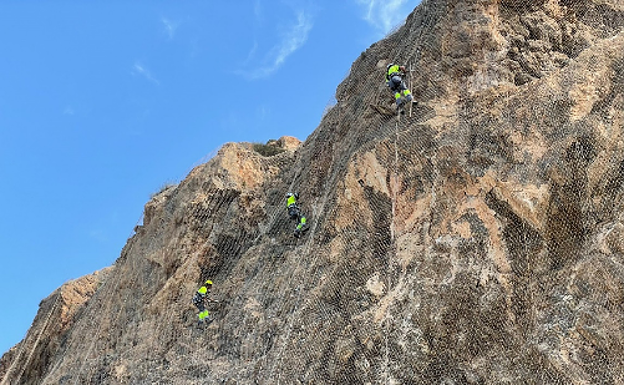 "Given the extraordinary situation that will be aggravated soon", the Platform agreed to establish a permanent coordination Commission together with the Subdelegation to allow this neighborhood participation body to propose alternative mobility measures and "rising against the different administrations that have direct or collateral power in the matters that concern us".

The Subdelegation was asked by Juan Carlos Oyonarte to make recommendations to Administrations and companies regarding teleworking. He stated that he supported teleworking in "those cases where workers can manage their work tasks" and that it would reduce the need for travel during peak hours.

The Platform, on the other hand, announced that concentrations were being held before the Metropolitan Transport Consortium "due the lack of alternative" without receiving any response to today's requests to the Development Delegation or the Consortium for reinforcement of buses to encourage public transport use and decrease the number of cars.

Oyonarte assured that "we are forced to focus on the Metropolitan Transport Consortium." He announced that the first protests would be held on May 25th, from 1:30 p.m. until 2:15 p.m. on Calle Hermanos Machado number 4, and from 2:30 to 3:30 p.m. in front of Intermodal Station in Plaza de la Estacion.

The Platform called Roquetas' announcement that he would request European funds to fund a shuttle bus linking Aguadulce with the Urbanization "propaganda". They recalled in this context that Roquetas de Mar's City Council "is required to implement urban transport" since it exceeds 50,000 inhabitants. Therefore, the Platform said that Roquetas' announcement of requesting European funds for a shuttle bus connecting Aguadulce and Urbanization was "propaganda".

Oyonarte referred to the absence of urban transport in the city as an "obvious abandonment" and asked the City Council for urgent action, "without using smokescreens that divert attention or confuse the citizen."

The spokesperson for the Platform stated that there was always enough budgetary capacity in Roquetero to finance urban transport. Since we started asking, we would need to do it in projects for trams, commuter trains, or railway lines that connect the whole of West Almeria, with branches to different population groups.

We will recall that the absence of urban services places more pressure on metropolitan transport lines. They must take over the Roquetas municipal traffic at a time where the metropolitan services are already saturated. This causes serious problems with meeting demand and meeting schedules. .

‹ ›
Keywords:
PlataformaCanaretePideComisionSeguimientoObrasAnunciaConcentracionesAnteConsorcio
Your comment has been forwarded to the administrator for approval.×
Warning! Will constitute a criminal offense, illegal, threatening, offensive, insulting and swearing, derogatory, defamatory, vulgar, pornographic, indecent, personality rights, damaging or similar nature in the nature of all kinds of financial content, legal, criminal and administrative responsibility for the content of the sender member / members are belong.
Related News