The deep-sea tug Abeille Flandre returns to Brest for deconstruction

The Abeille was moored on Quai Malbert, to the sound of Plougastel's bagad, and in the presence of several dozen spectators. 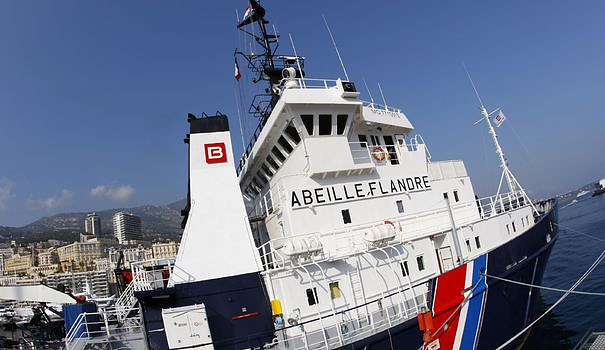 The Abeille was moored on Quai Malbert, to the sound of Plougastel's bagad, and in the presence of several dozen spectators.

63.5 meters long and 14.4 meters wide, the tug began its career in Brest in 1979, after its acquisition by the company Les Abeilles International, a French shipowner specializing in offshore towing.

Abeille Flandre notably towed the rear part of the oil tanker Erika after it sank in December 1999, off the coast of Brittany.

In 2005, she was moved to the Toulon service station, before giving way there on June 17 to the Abeille Méditerranée, one of the most powerful tugs in the world.

"Deconstruction has proven to be the only reasonable outcome in the absence of a viable memorial project," said Samira Draoua, president of Abeilles International, quoted in a statement.

The Navaleo company in Brest was chosen to ensure its deconstruction. Her twin, the Abeille Languedoc, has also been being deconstructed in Brest since August 2022.

The two ships, which were built in 1978 in the Norwegian shipyard in Ulstein, will be deconstructed simultaneously from March 2023.

"The two boats will be deconstructed simultaneously in a month and a half, thanks to the mechanization and know-how of our guys," Olivier Lebosquain, director of Navaleo, told AFP.

The steel will then be sent to foundries to be reused by other industries. "It's an end of life that is valued," said Mr. Lebosquain.

By March, the Navaleo teams will carry out the asbestos removal and the removal of fluids and furniture.

Heir to the company Les Abeilles, founded in Le Havre in 1864, the company Abeilles International protects the 3,120 km of French coastline thanks to four tugs and a rescue and assistance vessel chartered for the French Navy and the French maritime prefectures. .

Bees International have carried out 500 rescues for 44 years and saved more than 2,000 migrants since 2019.