Raul Aybar Gutierrez from Huetor Vega, a 13-year-old swimmer who is a member the CD Swim Granada, won the 36th Andalusian Swimming Championship for the juvenile category. 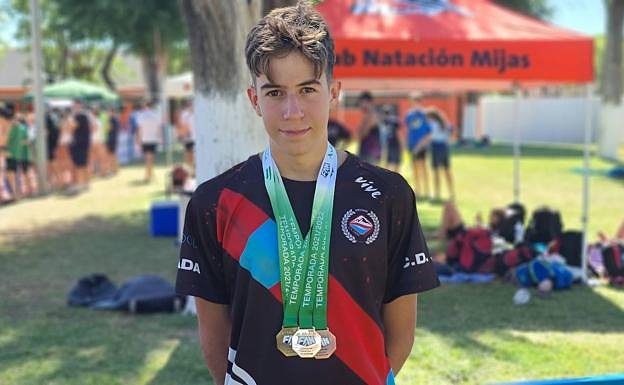 Raul Aybar Gutierrez from Huetor Vega, a 13-year-old swimmer who is a member the CD Swim Granada, won the 36th Andalusian Swimming Championship for the juvenile category. The event took place in Dos Hermanas, a Sevillian village. Raul completed three swim tests and was crowned Andalusian champion. He won the gold medal in 100 meter freestyle with a time 1:00.18.

Huetor Vegas was also runner-up in Andalusia aged 13 and silver medalist in the 200-meter freestyle, with a time 2:05.55, as well as third place and bronze medals in the 200m style, with a times of 2:35.23. Next day, July 15, 16, and 17, will see the Spanish Championship. Raul will be participating in the same tests as the swimmer from Huetor Vega, with the minimum mark required to qualify by the Spanish Swimming Federation.

‹ ›
Keywords:
NadadorAlevinHuetorVegaRaulAybarTriunfaCampeonatoAndalucía
Your comment has been forwarded to the administrator for approval.×
Warning! Will constitute a criminal offense, illegal, threatening, offensive, insulting and swearing, derogatory, defamatory, vulgar, pornographic, indecent, personality rights, damaging or similar nature in the nature of all kinds of financial content, legal, criminal and administrative responsibility for the content of the sender member / members are belong.
Related News