State visit to Washington: what are they saying about Emmanuel Macron in the United States?

"It's a spectacular rebound in Franco-American relations," enthuses the American channel CNN. 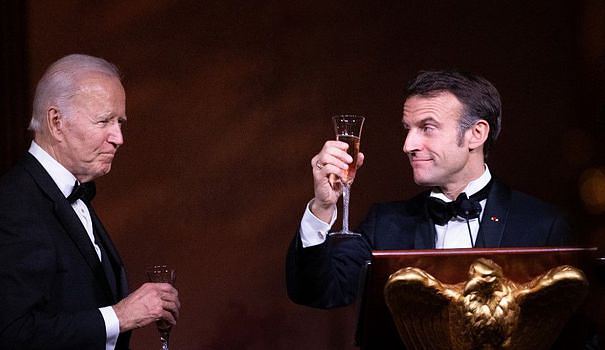 "It's a spectacular rebound in Franco-American relations," enthuses the American channel CNN. A year after the Australian submarine crisis which angered Paris and Washington, the good understanding between the French and American presidents was highlighted by certain media across the Atlantic. Is a dinner enough to make forget the frictions of the past? Be that as it may, the two heads of state have shown their goodwill: a Joe Biden who ventures a few words of French, an Emmanuel Macron all in familiarity and gestures of affection, and a frankly romantic gift: the two heads of state displayed their friendship on Thursday.

It's time for coordination, even on perhaps the most contentious topic on the agenda: Joe Biden's energy transition policy, which unashamedly gives priority to American jobs and "made in USA" products. . The American president took a step towards Europe, promising to fix the "defects" of his "Inflation Reduction Act".

"It's an unexpected victory" that Emmanuel Macron managed to snatch from his American counterpart", comments the European edition of the Politico site. It's unclear how far the Biden administration will go to resolve the Europeans' issues on a technical level, as teams on either side have yet to work out the details, but "the US president said the two leaders agreed to allow their teams to 'follow' their decisions", completes the American political media.

“France has, in many ways, taken the lead in the queue and become the essential partner of the United States when it comes to advancing transatlantic cooperation,” Charles told CNN. Kupchan, senior fellow at the Council on Foreign Relations and former senior director for European affairs at the National Security Council.

On Fox News, journalist Jesse Waters also recognizes that France is "the major player" at the moment in Europe. However, aside from a handful of comments, Macron seems to be taking a back seat in most US media. In the New York Times, journalists only mention the "tensions" to come with Europe after the measures taken by Joe Biden to boost American industry. The Washington Post and the Associated Press speak of emerging "friction" between the two countries on the issue of the Inflation Reduction Tax.

More than the good relations with the French representative, it is the fact that Biden said he was "ready to talk" with Putin if the latter "is looking for a way to end the war" which has been relayed more. On this subject, Joe Biden and Emmanuel Macron expressed their desire in Washington on Thursday to seek a solution together in Ukraine, but without cutting back on their support for kyiv. On television CNN and MSNBC will have been present on the coverage of this state visit, but Fox News will have spoken very little about it. New York Times, NPR... The State Dinner doesn't come to the fore when looking at their website.

More generally, this State dinner does not seem to have inspired many analysis papers, but the ink has flowed a little more on the splendor of this reception. In the Washington Post, the article of the Biden-Macron meeting is found in the "LifeStyle" section. The emphasis is more on the Baccarat crystal flutes, the color of the doilies or even the wine. Two paragraphs are devoted to the hearty menu. The White House sacrificed 200 lobsters and presented exclusively American wines and cheeses. In the Chicago Suntimes, the menu detail is listed. On Fox News, a conservative American channel, journalist Jesse Waters mentioned the staggering cost of the dinner: "I would have liked Macron to speak French, that would have been the least we could do given what this dinner is costing us", before ask about this hand that Biden does not want to let go: "Is it a kiss of death?"

True to form, the American tabloids relayed the behavior of the American president, who appeared lost on several occasions. In the Daily Mail, videos show Biden "wandering around aimlessly" and continually having to be "brought back to the group by Macron". In footage relayed on social media, the French president remained engaged with the crowd but, as the US head of state began to walk away, Macron grabbed his arm and threw him back into the group.

Finally, when Emmanuel Macron is mentioned across the Atlantic, his age difference with his American counterpart is accentuated. As here in the Washington Post: "When Macron was born in December 1977, Biden was in his first term in the Senate". Despite this generational gap, the two men have shown that they are trying to match their vision.