Skepticism around an international intervention force in Haiti

Since mid-September, gangs have been blocking access to the largest oil terminal, paralyzing the country, which lacks fuel for the distribution of drinking water, supplying hospitals or other essential daily activities. 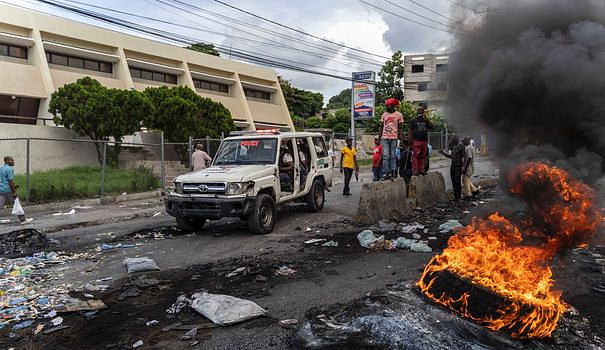 Since mid-September, gangs have been blocking access to the largest oil terminal, paralyzing the country, which lacks fuel for the distribution of drinking water, supplying hospitals or other essential daily activities.

Faced with this chaos, a new episode of a chronic security, political and humanitarian crisis to which is added a resumption of cholera, Prime Minister Ariel Henry has launched an SOS to the international community. A call relayed by UN Secretary General Antonio Guterres who asked the Security Council to consider sending an international armed force to put an end to this "nightmare".

But the idea of ​​sending a new foreign force is not unanimous, neither within the Haitian population nor within the Security Council.

"While the government lacks legitimacy and is incapable of governing, will sending such a rapid action force have the support of the various parties in Haiti or will it face resistance or even Will it provoke violent confrontations with the population?", recently launched the Chinese deputy ambassador to the UN, Geng Shuang.

Haitians have already seen American, French or Canadian troops pass through to stabilize their country, and UN missions - one of which brought cholera, causing an epidemic that killed more than 10,000 people.

"The international community has been doing the same thing for 25 years and it has yielded no results," comments Gilles Rivard, former Canadian ambassador to Haiti, saying that Haitians have "right to be bitter."

Some still hope that sending troops would avert the worst, at least in the short term.

It could "take back control of oil depots", restore access to drinking water crucial against cholera, and reopen roads blocked by gangs which prevent "the passage of humanitarian aid and essential goods". , she continues.

But as thousands of Haitians took to the streets to oppose foreign intervention and the government, one force could "become more divisive", the analyst tempers, fearing such a deployment could be perceived as support for the controversial prime minister.

Appointed two days before the assassination of President Jovenel Moïse in July 2021 - and then not yet in office - Ariel Henry has since clinged to power despite the questioning of his legitimacy by part of civil society and the political opposition.

"The country is ungovernable" and "the Haitians are unable to deliver a roadmap to lead to elections", regrets Gilles Rivard, who sees this roadmap as a prerequisite for the dispatch of an effective international force.

"We must push the Haitian government to make a compromise with the other political parties and civil society," adds Robert Fatton, of the University of Virginia.

A foreign force could certainly "give breath" to a population that needs to "eat, to go about its business without the continued fear of being killed by gangs or by the police", he notes.

But "without political agreement, without compromise, after one or two years, it will be the same catastrophe", fears the researcher, suggesting instead an international force which would accompany a "transitional government" towards elections.

In an international geopolitical context monopolized by the war in Ukraine, "who could lead such a mission?", Says Gilles Rivard, doubting that it will take place.

All eyes are on the United States, which is drafting the resolution on this "non-UN" force with Mexico.

An “urgent priority”, also commented on Monday the spokesperson for the State Department Ned Price, judging the “status quo” security and health “untenable”.

But difficult for Joe Biden to send troops to Haiti before the midterm elections on November 8, said Robert Fatton. And no other country seems enthusiastic. "It's going to be complicated".