"Puff": why teens' favorite e-cigarette is a ticking time bomb 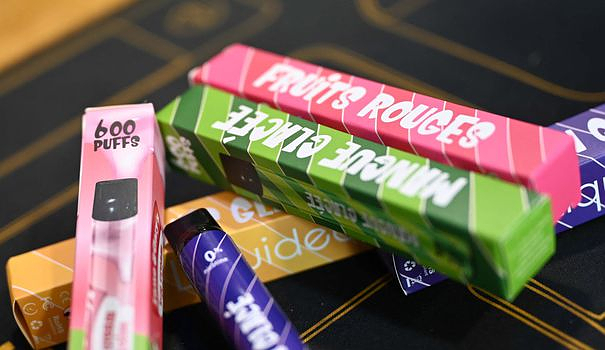 "Marshmallow", "ice candy", "choco hazelnut"... With its childish, sweet or fruity flavors, its brightly colored packaging reminiscent of sweets, its low price ranging from 8 to 12 euros for 500 puffs, the "puff ", which exists under twenty brands, is an undeniable commercial success. This disposable electronic cigarette targets teenagers, while e-cigarettes are prohibited for minors.

The "puff" would have been created by two Americans and marketed for the first time in early 2020, on the west coast of the United States, before being bought by Chinese groups. It arrived on the French market in 2021. It is also marketed on the Internet or in vapostores. Sales of "puff" already represent, for some tobacconists, half of the activity generated by the electronic cigarette: it brings them 140 million euros out of 3.6 billion in gross annual turnover.

The "puff" is more and more widespread among college and high school students: 2/3 of adolescents aged 13 to 16 have already heard of this electronic cigarette and more than 1/3 claim to know exactly what it is. is acting, according to a study unveiled this Tuesday, October 25 by the BVA polling institute for the Alliance Against Tobacco (ACT), a federation of anti-smoking associations Among the young people questioned in this study aged 13 to 16 years, 13% of them have already used the "puff", i.e. the same proportion of young people who have already smoked a classic or electronic cigarette, and 9% indicate that they have already bought one.

But this electronic cigarette is a health and ecological time bomb. It is in fact likely to make minors fall into nicotine addiction. "Increasingly popular on social networks, it has a rather positive and harmless image among young people", while it can contain up to 20 mg / ml of nicotine, an addictive substance, and can thus "be a door of entry" to cigarettes for adolescents, warns the Alliance Against Tobacco.

According to the BVA study for the ACT, among the adolescents using the "puff", 28% of them began their initiation to nicotine through this product and 17% of them then turned to a another form of nicotine or tobacco product. "Let's face it: the manufacturers never intended to make 'puff' a weaning tool but rather a means of transforming our young people into tomorrow's smokers through this new product from the highly addictive nicotine", regrets Loïc Josseran, president of the ACT-Alliance against tobacco, doctor and researcher in public health, quoted in the press release.

According to him, it is even a "trap", he blurts out to the Parisian. "This product is an insult to youth, they are presented with a gadget that intoxicates them," he laments. "Adolescents underestimate the harmfulness of this product: made up of nicotine salts, the use of the 'puff' increases the risk of developing inflammation of the respiratory tract and impacts the cognitive acquisitions of the youngest", also notes the ACT.

The "puff" also poses an environmental problem: this "disposable plastic product, with a lithium battery", is a "waste that we are starting to find on the beaches", reports to AFP Diane Beaumenay-Joannet, project manager on plastics within the NGO Surfrider. "Because it's disposable and cheaper than a pack of cigarettes, and because the target is young, we will find more and more of it in the environment," she notes, pointing to "the lack of communication on the fact that it must be returned to a suitable bin".

Moving towards "more eco-designed and more sustainable products" would require revising the European directive on single-use plastic products, which is "not on the agenda", laments Diane Beaumenay-Joannet. According to her, "the 'puff' will have time to flood the market and produce a lot of new waste".

The Confederation of tobacconists, which brings together its members for its annual congress Thursday and Friday in Paris, is delighted with the "dynamic sales of this new product", declared to AFP its president Philippe Coy. But she also deplores "the marketing done around the 'puff', with a well-defined targeting on a young population", he underlines. "This puts us in a very delicate situation: influencers have communicated on TikTok, this has created a request that we must refuse, which is quite complicated for us on a daily basis", he reports.

In the spring, the Ministry of Health had sent a report to the Public Prosecutor's Office, in view of the "strong promotion" of the "puff" on "social networks frequented mainly by young people". The some 23,500 tobacconists in the territory are often singled out: at the end of 2021, the National Committee against Smoking (CNCT) affirmed, after a "mystery shoppers" survey with 17-year-olds, that six out of ten violated the ban on the sale of tobacco to minors.

However, respecting the ban on the sale to minors of the four products marketed by tobacconists, tobacco, electronic cigarettes, alcohol and gambling, is part of the "commitment" of a profession which could also be entrusted with " tomorrow, new ranges of so-called sensitive products", considers Philippe Coy.

The Confederation of tobacconists has "created an ethical group to restore order: it's good that we are facing a difficulty, we are aware of it... it is not very popular (within the network) but today is the path that we will take", concedes Philippe Coy.

For its part, the ACT-Alliance against tobacco claims purely and simply "the immediate prohibition" of the "puff", "as harmful for the health of our children as for our environment". "The ban on the sale of disposable electronic cigarettes in France is the right decision to take if we do not want to see this pediatric epidemic of nicotine addiction accelerate", underlines the federation of associations for the fight against tobacco.

The concern around the "puff" is not unanimous, however. Questioned by Le Figaro, Jean Moiroud, president of the interprofessional federation of the Vape, considers that this product can dissuade a whole generation from smoking "real" cigarettes. "In France, the average age of entry into tobacco is between 13 and 15 years old, because it is an age where we seek to do new experiments. Perhaps the 'puff' can respond to this request while dissuading the teenager from consuming a carcinogenic product: tobacco", he wants to believe.