A paper published in the Paleontology section in the prestigious Swiss journal Frontiers in Ecology and Evolution shows that the hominin population was not sufficient to support their survival and their temporary settlements. 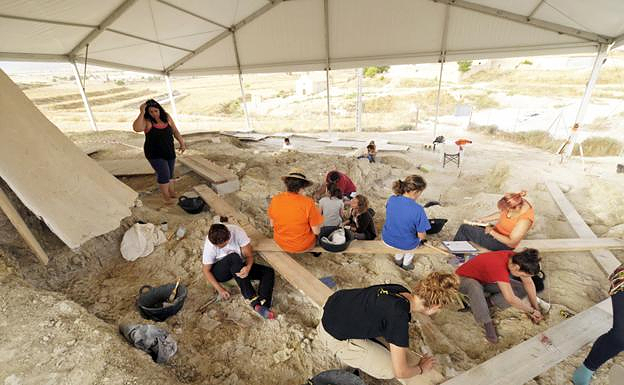 A paper published in the Paleontology section in the prestigious Swiss journal Frontiers in Ecology and Evolution shows that the hominin population was not sufficient to support their survival and their temporary settlements. On average, there were 12 individuals for every 100 km2.

Barranco Leon, and Fuente Nueva 3 are the two Orce sites that preserve the oldest evidence of human presence at the western edge of Eurasia. They date back to around 1.4 million year. They are accompanied by the Sima del Elefante de Atapuerca which is the first human settlement on the peninsula's north. It dates back approximately 1.2million years.

These sites are extremely rare for human fossils (a Barranco Leon milk tooth and Sima del Elefante jaw fragment), but they all confirm a significant anthropic activity of the lithic industry. carved stones made of flint or limestone that were used to cut meat and tendons. The marks they left on the bones of large mammals on which they fed as opportunistic hunters also served their purpose.

Recent decades have seen research focusing on the subsistence strategies of our ancestors from these early settlements. The nature of hominin population and their temporary or permanent nature is an aspect that has not been explored until now. The fact that these chronologies are of a discontinuous nature in archaeological records is a clue to this. This suggests the sporadic nature of settlements.

This research has analyzed the Guadix Basin's inhabitable area for hominins, based on the extensive geological mapping done in recent years. This allowed us to identify with sufficient precision the approximate 2,900 km2 area where hominins could have emerged, as well as an area of approximately 1,100 km2 that is relatively permanently flooded due to Lake Baza and its marshy surroundings.

These data were combined with estimates of the human population density in the basin. They were calculated in previous works using the availability of meat resources in the ecosystems at the time. This information allows hominins to determine the population density they could reach according two possible scenarios. One, they could act as scavengers with results of 12 individuals for every 100 km2, or more likely, hunt prey, which would result in a density of 9.5 people per 100km2. It was possible to determine the human population of Guadix-Baza during the Lower Pleistocene by using both the habitable area and the population density.

Because the Basin is very isolated from surrounding areas and surrounded by mountains of Cordillera Betica, it was difficult to keep a healthy population. . The minimum viable population size for mammals, including primates is less than 4,000. Consanguinity is a problem in the long-term and medium term. This causes a decline in genetic variability, which eventually leads to extinction.

Venta Micena, a site that dates back to 1.6 millions years, provides interesting clues. It is specifically the number of Lycaon Lycaonoides painted wolves. Anatomical connections of individuals of this species were made in 1995 with the skull and jaw. The fossil has a striking bilateral asymmetry and the absence of any series of teeth including the upper left canine whose germs were not formed during the animal's life.

Both of these phenomena can be attributed to inbreeding. This shows that hypercarnivorous dogs, whose population density was 13 per 100 km2, were exposed to the same conditions and environmental factors as the basin's hominins. The dog's population of 380 individuals would have a lower reproductive fraction, as only the dominant male or female reproduces in modern African wild dogs. Pack

These results indicate that the Guadix Basin's archaeological record is discontinuous and sporadic. This is due to the fact that these sites were not discovered yet, but because the settlements of humans during these very old chronologies are quite ephemeral.

‹ ›
Keywords:
AsentamientosHumanosOrceCaracterEfimero
Your comment has been forwarded to the administrator for approval.×
Warning! Will constitute a criminal offense, illegal, threatening, offensive, insulting and swearing, derogatory, defamatory, vulgar, pornographic, indecent, personality rights, damaging or similar nature in the nature of all kinds of financial content, legal, criminal and administrative responsibility for the content of the sender member / members are belong.
Related News