Nurses in turn on strike in the United Kingdom, hit by a historic social crisis 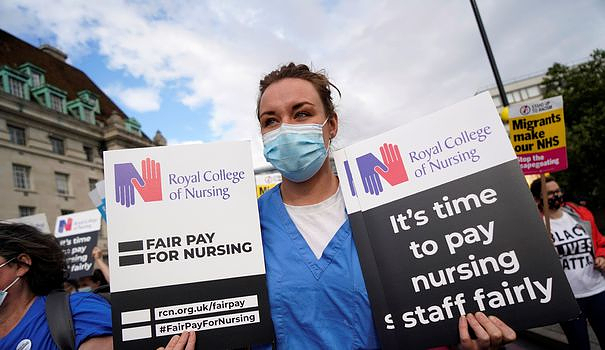 "Nurses have had enough," said Pat Cullen, general secretary of the Royal College of Nurses (RCN) union. "Enough of the low salaries, (...) enough of not being able to give patients the care they deserve".

The staff had voted on November 9 in favor of this unprecedented strike in the history of the RCN, created 106 years ago. This union announced Friday two days of action of December 15 and 20 after “the rejection of negotiations on the part of the government”.

According to estimates, the real salary of nurses has fallen by 20% since 2010, in particular due to the current crisis in the cost of living, with inflation exceeding 11%. The annual salary of a novice nurse is 27,000 gross pounds (31,400 euros).

But for Health Minister Steve Barclay, “it is a difficult time for everyone” and the government cannot meet the “unaffordable” demands of the RCN, which “represent a salary increase of 19.2%”, or an additional 10 billion pounds per year according to him.

On the BBC on Friday, Ms Cullen disputed those figures. "Our economists have been working hard on our numbers. If Mr. Barclay... wants to stop beating around the bush and wants to talk, he can avoid these strikes." "My door is wide open, night and day," she added.

Mr Barclay responded with a tweet that he too was 'keeping (his) door open to the RCN if they want to chat'.

One in four hospitals have set up food banks to support staff, according to NHS Providers, which represents hospital groups in England.

"We're exhausted. We're fed up. We need a raise to live," Ameera, a nurse at a London hospital who voted to strike, told AFP.

Nurses oppose the strike, fearing that the mobilization will harm patients.

"I think we have to accept the fact that a two-day strike is not really the problem. The problem is years and years of underfunding," Patricia Marquis told Sky News. the head of RCN in England.

The public health system (NHS), underfunded for years, is in a serious crisis. The government has announced an increase in the NHS budget of £3.3billion next year and the year after.

According to the RCN, in England, 47,000 nursing positions are unfilled. Last year, 25,000 nurses or midwives who worked in the public slammed the door.

More than 7 million people are waiting for treatment in English hospitals, a record high.

The social movement does not only hit the health sector. Many other employees in the public and private sectors, from lawyers to transport, have also gone on strike this year.

In Scotland, teachers were on strike Thursday to demand increases. University employees also stopped working on Thursday and Friday.

Postal workers have extended their strike until 2023, which could affect the delivery of mail and parcels during the holiday season.

"The last major strikes date back to the 1970s and 1980s, but then they mainly affected the private sector and industry. There, it is above all the public sector", reminded AFP Pippa Catterall, professor of history at the University of Westminster, itself a striker.

"People have been under pressure for a long time. It's not just salaries, but also the workload. (...) We don't see how things can change except by going on strike", a- she continued.

And with record inflation, "people are increasingly irritated by the cosmetic measures announced by employers and the government".