"Like a jealous lover": near the Ukrainian front, anger against Putin 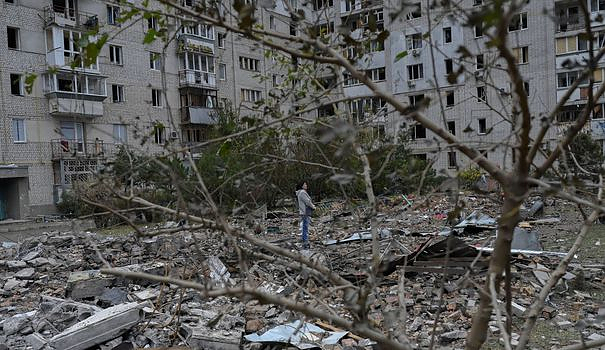 The second S.300 missile exploded a minute later, at 1:44 a.m. By then, Gennadiy Gerulo had already fallen out of bed, realizing that much of his old way of life had disappeared.

The engineer looked out his shattered kitchen window hours later and saw the strikes on the port city of Mykolaiv as a sign of near victory.

"He's like a jealous lover," said the 50-year-old, speaking of Russian President Vladimir Putin. "He says if he can't have Ukraine, nobody can."

Southern Ukrainian cities such as Mykolaiv will play a crucial role in the next stage of the grueling war that the Kremlin master began exactly eight months ago.

A blistering Ukrainian counter-offensive that forced the Russians out of the territories they had seized in the more industrial north reached the agricultural south.

And towns such as Mykolaiv and Kryvyi Rih, about three hours by car northeast, offer the Ukrainians two bases from which to launch their next attacks.

The latest wave of missiles, which injured four, reinforced the belief of Svetlana Tichevska, a neighbor of engineer Gennadiy Gerulo, that Ukraine is on the right track.

Russian authorities are already evacuating the nearby city of Kherson - the only regional capital the Russians managed to control throughout the war, which began on February 24.

A Ukrainian victory in this area would sever the land bridge the Kremlin established between Russia and the Crimean peninsula which it annexed in 2014.

It would also restore significant access to the Sea of ​​Azov and leave Mr. Putin little leeway in a military campaign that has turned him into an international pariah.

Cleaning the debris from the stairwell a few floors below the engineer, Svetlana Tichevska expresses almost the same thoughts as her neighbor.

"He's like a wounded animal," she said of the Russian president. "He destroys himself and wants to drag others down with him."

The retaining wall of Svetlana's building cracked, and the facade of a smaller building across the yard partially collapsed.

Few inhabitants think of staying in one or other of the buildings.

"I think victory is near," said the 50-year-old woman, amid the destruction.

The trail of destruction wrought by retreating Russian forces has spawned hostility towards Moscow in places where many residents prefer to speak Russian and have family across the border.

Guennadiï Gerulo, Russian-speaking, says he feels "nothing but hatred, pure hatred for these people who call themselves our brothers".

The overwhelming majority of attacks target Mykolaiv and surrounding towns after midnight, or when people wake up and go out for the first time that day.

The timing intrigues many. Some believe that Russia may be trying to demoralize Ukrainians by depriving them of sleep.

"The Russians want to exhaust us and start civil unrest. They want us to force our government to give up," said the engineer. "They don't know any other ways."

Mykolaiv became Moscow's target in the first weeks of the invasion. The Russians were making huge gains and targeting the nearby Black Sea port of Odessa, a cultural capital mentioned by Putin when he went to war.

Mykolaiv suffers for the second time with the withdrawal of Russian troops.

But Lioudmila Falko, an academic and part-time volunteer, seems almost joyous as she rummages through what's left of her daughter's apartment.

"These kamikaze drones and these missiles are his last acts", assures this 60-year-old woman, about the Russian president. "Children are dying, old people are dying because he is dying."