Iran: youth on the streets, the regime at an impasse

The demonstrators were to be plunged into darkness, cut off from the rest of the world. 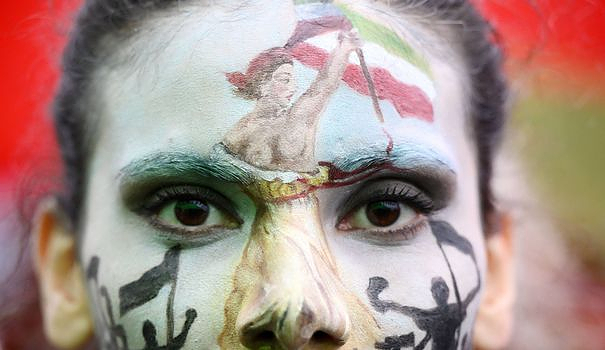 The demonstrators were to be plunged into darkness, cut off from the rest of the world. But, despite network and communication app shutdowns, incredible images continue to reach us from Iran and its mad revolt against the regime. High school girls who, with their hair in the wind, attack their director and scare him away. University students gathering to throw down and burn their veils. Teenagers parading around singing "death to the dictator". Generation Z is rising in turn, and the Iranian government is facing a wall of protest.

For fear of contagion, the Tehran government had postponed the start of the academic year for a week. But his measure did not change anything, on the contrary giving students time to organize themselves: as of the start of the school year on Monday, around thirty universities were transformed into places of gatherings against the government and a student strike is affecting today dozens of establishments today. “All regions of Iran, all ethnic groups, all social categories are now protesting, says Sanam Vakil, director of the Middle East program at Chatham House in London. The death of Mahsa Amini, then those of all these young women killed by repression, have generated unprecedented popular anger."

Faced with the uprising, the Iranian regime is doing what it knows best: suppressing and denying any claims. For the first time on Monday, Ayatollah Khamenei spoke of the protests outside the Armed Forces Academy: "These riots and insecurity were caused by the United States, the Zionist regime [Editor's note: Israel], their mercenaries and Iranian traitors abroad."

The Leader of the Revolution thus rules out any possibility of dialogue and lets it be understood that only repression will bring calm to Iran. “Iranian leaders know that they have lost all legitimacy, but that does not pose a particular problem for them, estimates Saeid Golkar, specialist in Iran at the University of Tennessee. They know that only repression allows them to maintain themselves. in power, so they repress, but they no longer control the country. The Islamic Republic is in deep crisis."

With inflation at 60%, the explosion in the price of bread, oil or eggs for six months, the Iranian government has seen anger crystallize. According to data from the Ministry of Labor, in August 2021, one in three Iranians lived below the poverty line, or thirty million inhabitants. "This tragedy, the death of Mahsa Amini, occurred in a period of great economic and political frustration for Iranians, but also of international isolation, underlines Sanam Vakil. It is a perfect storm." The government did try to mobilize its support on September 23, but these "counter-demonstrations" only attracted a few thousand people to the streets, a far cry from the show of force the regime had hoped for.

All that remains then, in the software of the leaders, is repression. Thousands of demonstrators have already been arrested, in the street or at home, as have artists and personalities who support the movement. But the violence of the bassidjis, these pro-regime militias which have already killed a hundred people, has only amplified the anger of the demonstrators. "In Romania, a few days before the fall of Ceausescu [in power from 1965 to 1989], no one believed in the end of his regime, says Saeid Golkar. Each time, an unpredictable event causes these pivotal moments. Let's not forget that, if the regime can succeed in repressing the demonstrators with each revolt, the demonstrators only need a victorious revolt to put an end to the regime.

In 2009, 2017 or 2019, the demonstrations had gained momentum before being stopped by relentless repression. Each time, the same observation: without weapons, popular protests are doomed to failure in the face of this militarized and ruthless regime. This year, if the demonstrations in the big cities are carried out unarmed, uprisings question in several Iranian provinces. In the south-east in particular, the province of Sistan-Balochistan has been experiencing strong tensions since Friday, with exchanges of fire between the authorities and armed groups. In Iraqi Kurdistan, on the western border of Iran, the Tehran army has been bombarding armed brigades of Iranian Kurds for several days, in favor of the demonstrations.

Meanwhile, the European Union is beginning to consider additional sanctions against those responsible for the repression in Iran, and France announced on Tuesday its intention to freeze the assets of certain leaders and to prevent them from traveling. On all sides, troubles are piling up for the regime.