Twenty-four people remain missing after the 5. 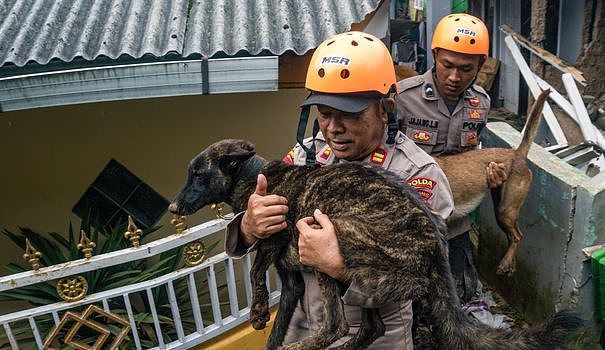 Twenty-four people remain missing after the 5.6-magnitude earthquake caused landslides and destroyed buildings in West Java, said agency chief Suharyanto, who like many Indonesians has only one name.

“These 24 people have been identified,” he told a news conference.

According to Henri Alfiandi, the head of the national emergency services, the search will continue until Monday, or even beyond if all the bodies are not found by then.

"The problems are the instability of the ground, the thickness of the landslides aggravated by the continuous rains and the fears of aftershocks," he told the Kompas television channel.

Many of the victims are children, some of whom were in class.

A seven-year-old girl, whom rescuers had been looking for for several days, was found dead on Friday in the ruins of a collapsed house in the district of Cianjur, near the epicenter of the earthquake.

"The body was immediately handed over to the family. The family accepted it and it was buried," said Jeksen Kolibu, a 28-year-old rescuer.

"The family was devastated... The mother was among those to whom the body was brought," he added.

Several dozen rescuers had tried Thursday to clear with shovels, hammers and bare hands the debris of the house where the family thought the little girl was at the time of the earthquake.

The little girl was found on Friday surrounded by debris, under three layers of concrete, with very little room to breathe.

Rescuers covered his face and placed his body in a body bag, in front of his father, Ahmad Ashikin.

She was buried in a nearby cemetery less than an hour later.

The day before, her mother, Imas Masfahitah, 34, was still hopeful that her daughter could be found.

"She was playing outside, I was preparing the meal in the kitchen when the earthquake happened. Very quickly, in two seconds my house collapsed," she told AFP.

The discovery on Wednesday evening of a 6-year-old boy, Azka, who had survived under the rubble for two days, had revived hopes of finding survivors.