Incidentally, charging an e-car in 15 minutes – this idea is intended to solve two problems at the same time

Fortunately, founders can be reliably identified by their sneakers. 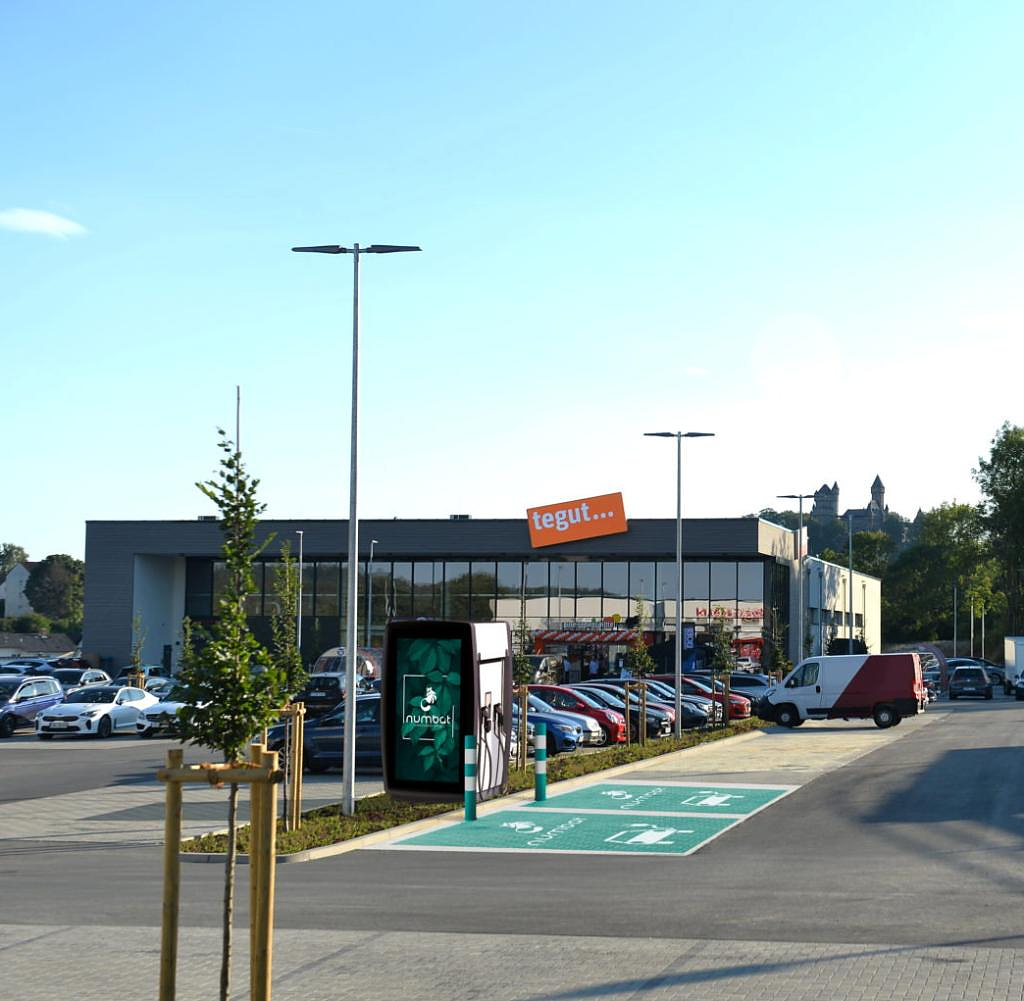 Fortunately, founders can be reliably identified by their sneakers. Martin Schall is the only one in sneakers on this cold November morning in the lobby of the Hotel Berlin Central District. Around him: many older men in anthracite-colored suits who shake hands or type on their mobile phones.

And a few young women scanning tickets and clearing away used coffee cups. An event from the old days. So what is the early 30-year-old founder doing here?

The German Trade Congress is an important date for him, explains Schall. Here they are all, the CEO of the Rewe Group, the CEO of Metro AG, the managing director of Alnatura. He must speak.

And that's why he came to Berlin from the Allgäu. But, he adds with a grin, he also wore a suit and no sneakers yesterday. And what does a founder in a suit discuss with the big names in German retail?

Martin Schall has an offer to make to the bosses of the big retail companies: he and his co-founder Maximilian Wegener are setting up fast-charging stations with battery storage in the parking lots of their branches, where customers can charge electric cars while they shop.

“Our aim is to get an electric car from zero to 80 percent full within 15 to 30 minutes. And we can do that with our 800-volt technology,” says Schall.

Numbat is also organizing the construction of photovoltaic systems on the roofs of the supermarkets that feed these charging stations. The start-up takes care of all permits and building applications - and thus solves two threatening problems at once: PV systems on the roofs of new buildings are already mandatory, and retrofitting of old roofs could come. And the increasing number of e-drivers are looking for ways to charge their cars. A supermarket with a fast charging station is therefore much more attractive to them than one without.

But the founders of Numbat are actually about more than the chic USP for supermarkets, says Schall. Like every impact company, the Allgäu start-up has an eye on the big picture: the spread of electric cars threatens a "social clash," says Schall: "Tesla produces an electric car within 22 hours," he explains . Where are they supposed to load? The charging infrastructure in Germany is anything but ready for the boom.

"Electromobility and charging infrastructure will only be built where it pays off," he continues. So in urban areas, on freeways and so on. Rural areas are neglected. First.

And secondly: "Those who have a single-family home and the opportunity to build their own wall box on their property are privileged," explains Schall.

But more than half of Germans don't have them, they live in apartment buildings, many are "lantern parkers", as he says, park their cars on the street where something is free. There aren't any charging options and there probably won't be any.

“The municipalities say: This is not our business. We are not an energy supplier.” And some municipalities refer directly to private areas, such as supermarket parking lots, for the development of a charging infrastructure.

The big highlight of the offer that the founder from Kempten has in store for the group managers is that it doesn't cost the dealers anything. Numbat does not sell the hardware, but earns money by selling the electricity to e-drivers. They would charge between 40 and 60 cents per kilowatt hour. According to Schall, this is a good offer, on average prices in Germany are currently between 0.55 and 1 euro.

Numbat can be so cheap thanks to the batteries: all numbats are grouped together in a swarm. This results in a quasi-giant power storage system. In times when a lot of renewable energy is being produced and green electricity is correspondingly cheap on the electricity exchange, Numbat buys properly and fills this storage.

"We can then sell this electricity at the price we want," says Schall. And last but not least, there are two advertising monitors on each of the charging boxes, which Numbat also earns money from marketing.

Schall and Wegener have already been convinced by two supermarket chains: From January, Numbat will set up a fast charging station in the parking lots of around 50 branches of the southern German food chain Feneberg. This is followed by Tegut with 200 locations and two columns each on average.

This year, Numbat is turning over around ten million euros, reports Schall, next year he is planning 150 to 160 and the year after a tripling or quadrupling. The sales funnel is very full. Fuller, perhaps, after his weighty meetings at the trade convention. "The business model is profitable and the money from our Series A will last for a while," he says.

It should be, because the market that Schall and Wegener are entering is of course not free of competition. Above all: In the field of fast charging stations or high power charging stations, the big players have been at the forefront.

Most of these have so far been operated by the energy supplier EnBW, Energie Baden-Württemberg. According to the company, it currently operates 750 fast charging stations in Germany, and 2,500 new ones are to be added by 2025. Eon and the energy supplier EWE from Lower Saxony follow with more than a hundred stations.

And the car manufacturers themselves also want to earn money from the topic. Tesla is constantly building new charging stations in Germany, as is Ionity, a joint project of the major car manufacturers BMW, Ford, Hyundai, Mercedes-Benz and Volkswagen. A competition for coveted parking spaces on motorways or supermarket parking lots has long since flared up.

The issue of renewable energy continues to get a lot of tailwind from politicians, but there are often obstacles in the way: "The issue of building permits and building law is what causes us problems," says Schall. Not only are there sixteen different pieces of legislation in building law in sixteen federal states, but also at the local level, mayors and communities have a lot to say when it comes to creating charging infrastructure.

And just this much: not all mayors are fans of as many charging stations as possible in their towns.

The gray men from the lobby gradually retreat to the hotel's conference rooms. In one of them, Robert Habeck and Christian Lindner will still be speaking to the bosses of the corporations today. Martin Schall doesn't flinch when a bell rings to indicate the program is about to start.

He continues to talk about his start-up and seems very happy not to be part of the gray masses. Numbat is his "business idea number 86," he says, jokingly, of course. But in reality he had been toying with the idea of ​​founding a company for a long time before he actually did it.

Prior to this, Schall had a remarkable career with a machine builder in Reutlingen. The company supplies companies such as Apple and Tesla. He was a board officer there and later head of the division. He was responsible for several hundred employees for three years, constantly traveling between Shenzhen, Silicon Valley and the Swabian Alb. Then the offer of a board position at a Swiss company fluttered in.

"That was the last point where I could still make the leap," he says in retrospect. The leap into self-employment. "50 percent of my friends said, 'How can you? 50 percent said: how cool. And no one said: I would do that too.” Schall resigns and founds a company. Has he ever regretted it?

He laughs: "I regretted being in the group." Yes, thirty days' vacation was nice. For three years he has had almost zero. And constantly 80 hour weeks. And all that. But mostly now he wears sneakers. And it's obviously worth it.

‹ ›
Keywords:
GründerszeneStartupsElektroautosAkkusElektromobileTesla MotorsTexttospeech
Your comment has been forwarded to the administrator for approval.×
Warning! Will constitute a criminal offense, illegal, threatening, offensive, insulting and swearing, derogatory, defamatory, vulgar, pornographic, indecent, personality rights, damaging or similar nature in the nature of all kinds of financial content, legal, criminal and administrative responsibility for the content of the sender member / members are belong.
Related News