The country had already been hit by massive strikes on Tuesday, which come after another humiliating Russian retreat. 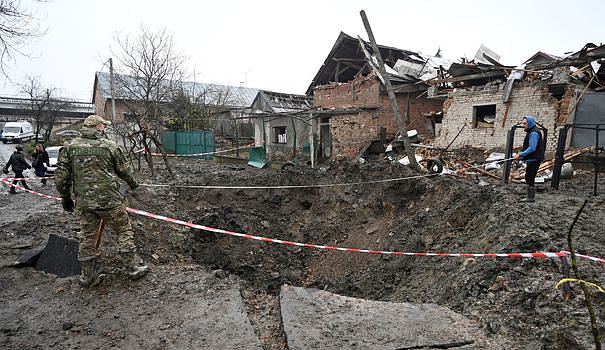 The country had already been hit by massive strikes on Tuesday, which come after another humiliating Russian retreat.

Russia, under pressure from a Ukrainian counter-offensive, abandoned the north of the Kherson region (south) on November 11, although it claims annexation.

Tuesday's strikes had already left some 10 million Ukrainians without electricity as winter approached, according to kyiv.

The capital experienced its first snowfall on Thursday, which covered cars parked in the streets. The regional governor, Oleksiï Kouleba, had warned the day before that the coming week would be "difficult", with temperatures which could drop "to -10°C".

Thursday morning in Dnipro (center-east), 14 people including a 15-year-old girl were injured in a bombardment, regional governor Valentin Reznitchenko said on Telegram.

"All are hospitalized in the city," he added.

Two infrastructure sites were hit in this Russian strike, according to the presidency.

In the kyiv region, two cruise missiles and Russian kamikaze drones of Iranian manufacture "Shahed", were shot down by the Ukrainian defense, said the military administration of the city

An AFP journalist saw one of these missiles fly over a residential area in the east of the capital.

- "Aggravation of the situation" -

National electricity operator Ukrenergo announced the extension of power cuts for the day due to the "worsening of the situation".

“Due to a sharp cooling, electricity consumption increased in the regions of Ukraine” which “further complicated the already difficult situation in the electricity system”, leading to “wider restrictions” in the consumption of electricity. energy across the country, Ukrenergo lamented on Facebook.

"This is a necessary measure to preserve the stability of the energy system after the sixth targeted Russian missile attack against energy facilities," the group said in reference to Tuesday's massive Russian strikes.

Thursday morning, the capital kyiv experienced its first snowfall, while many neighborhoods were without power. A fine blanket of snow covered the cars parked in the streets.

The regional governor, Oleksiï Kouleba, warned on Wednesday that the coming week would be "difficult", with temperatures which could drop "to -10°C".

On the diplomatic and economic level, the agreement allowing Ukrainian grain exports from Ukrainian ports has been renewed for the four winter months, alleviating concerns about a possible global food crisis.

Three of the parties involved in this agreement, Turkey, Ukraine and the United Nations confirmed Thursday morning the continuation of this agreement which also involves Russia, but Moscow has not yet communicated at this stage.

The "Grain Initiative" in the Black Sea, which expired on Friday evening, has allowed more than 11 million tons of grain to leave Ukrainian ports in four months, after a long blockade of Ukrainian ports by the Russian army in spring.