Ping-pong in Astana: On the sidelines of a summit in Astana, Turkish President Recep Tayyip Erdogan had a table tennis match with his Kazakh counterpart Kassymshomart Tokayev. 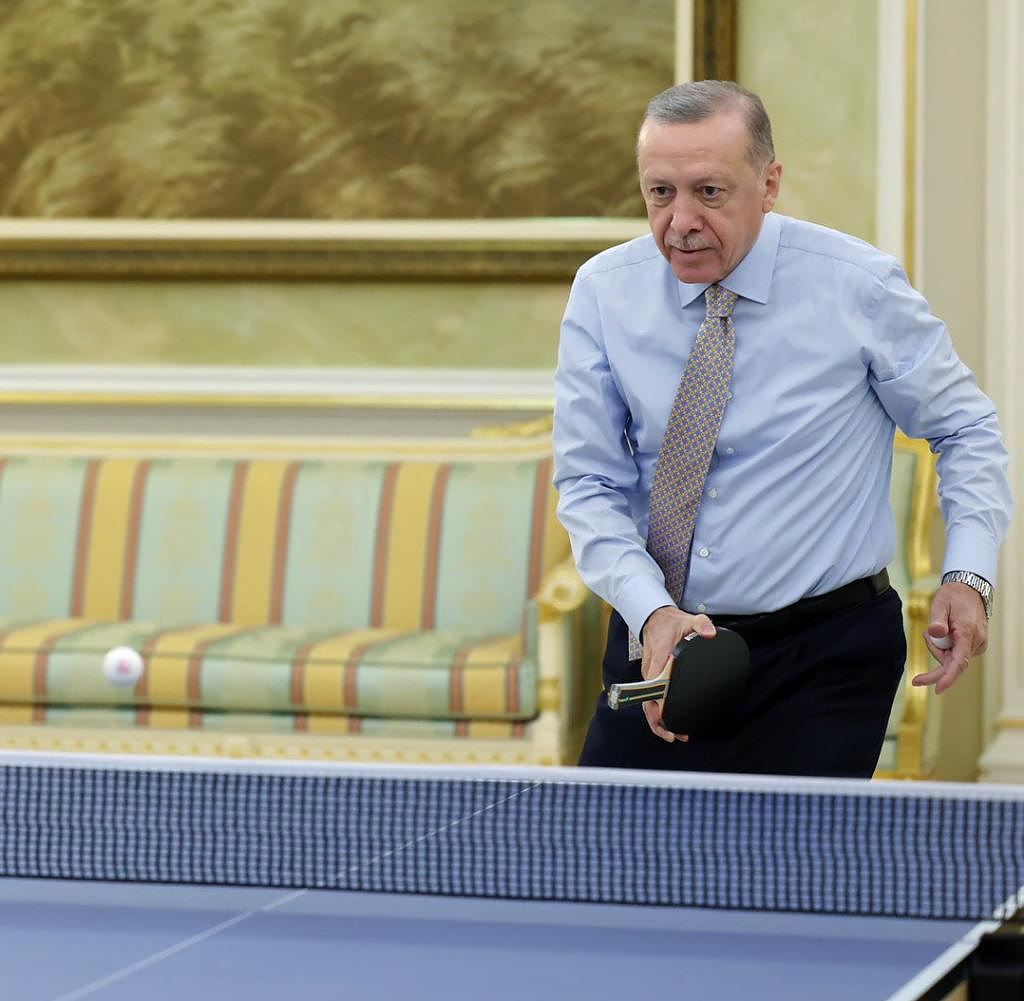 Ping-pong in Astana: On the sidelines of a summit in Astana, Turkish President Recep Tayyip Erdogan had a table tennis match with his Kazakh counterpart Kassymshomart Tokayev. Photos of the game of the two in their late sixties on Thursday with shirt and tie under a pompous chandelier attracted attention, among other things because of Erdogan's strange bat position.

Pictures showed how Erdogan held the blade of the bat instead of the handle - apparently a standard position of the Turkish President, as pictures from past table tennis games suggest. The two presidents had also had matches in the past.

Erdogan attends the Summit of the Conference on Cooperation and Confidence-Building Measures in Asia (CICA) in Astana. A meeting with Kremlin chief Vladimir Putin is expected for midday. It is not clear whether the two heads of state will then comment, said an official at the President's Office.

The goal is, among other things, "to put an end to the bloodshed as quickly as possible," the Communications Ministry quoted Erdogan before the meeting. NATO country Turkey maintains good relations with Moscow, but also with Ukraine. The Foreign Ministry in Ankara sharply criticized Russia's illegal annexations in Ukraine.

In the past, the Turkish government and its leader Erdogan have repeatedly advocated the inviolability of Ukrainian borders and a diplomatic solution to the conflict. According to the Turkish state news agency Anadolu, eleven heads of state and government are expected to attend the summit in Astana.

‹ ›
Keywords:
NewsteamErdoganRecep TayyipKasachstanTischtennisTokajewKassymschomartRecep Tayyip ErdoganPolitikAstanaKassymschomart TokajewKonfliktUkraineWladimir PutinAnadoluEndsechzigerRusslandTürkei
Your comment has been forwarded to the administrator for approval.×
Warning! Will constitute a criminal offense, illegal, threatening, offensive, insulting and swearing, derogatory, defamatory, vulgar, pornographic, indecent, personality rights, damaging or similar nature in the nature of all kinds of financial content, legal, criminal and administrative responsibility for the content of the sender member / members are belong.
Related News