Christmas tree balls from Lauscha are a World Heritage Site

A small fireball grows in the gas flame. 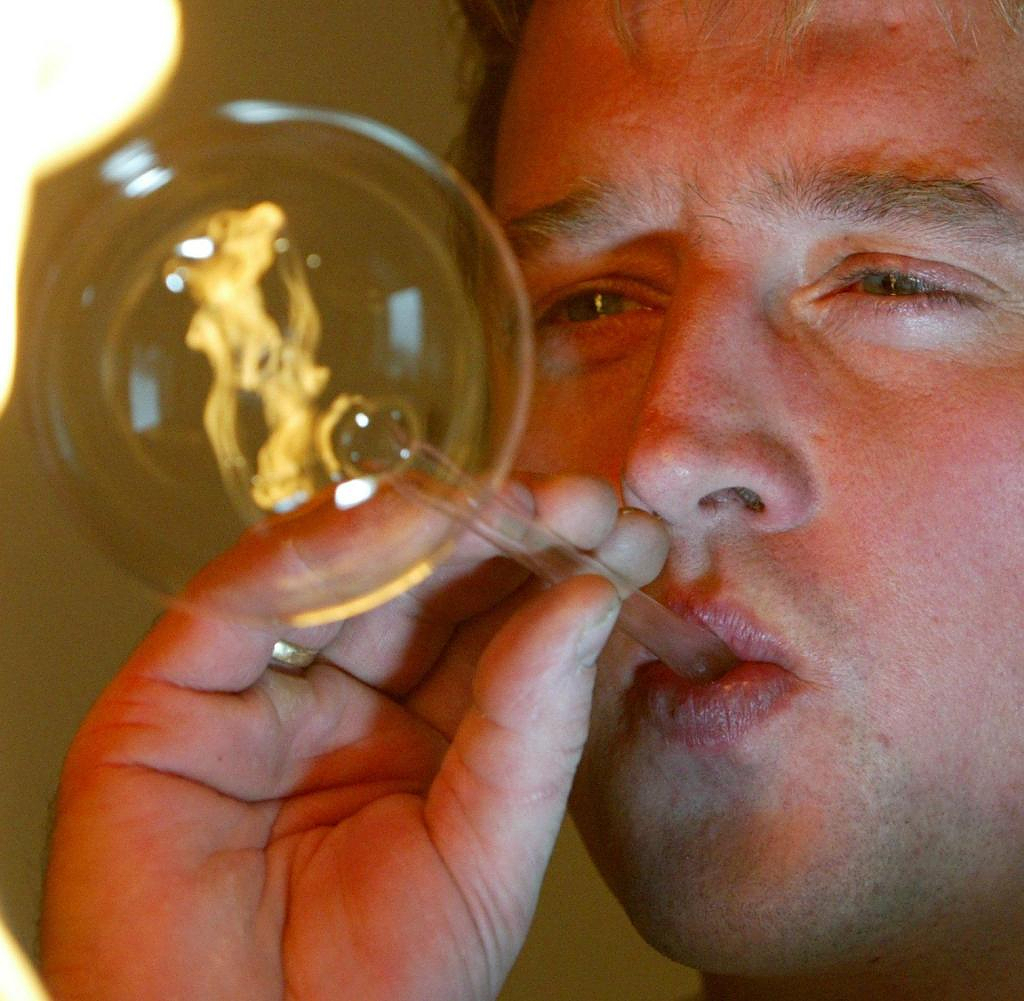 A small fireball grows in the gas flame. At first, the sphere glows glowing red, but slowly it becomes larger and more transparent. Master glassblower Andreas Tresselt shows how it's done, after which visitors to his shop can try to blow Christmas tree balls themselves.

You carefully take a glass tube between your lips and blow. Less powerful than a balloon, slightly more than soap bubbles. "Hot glass is as soft as honey," explains Tresselt, turning steadily to ensure the perfect spherical shape. This is high craftsmanship.

Andreas Tresselt is one of 46 glassblowers in and around Lauscha, the birthplace of the Christmas tree ball. More than 180 years ago, the first ball was built in the southern Thuringian town of 3000 inhabitants.

Since then, one generation of glassblowers has passed this art on to the next. The glass Christmas tree decorations from Lauscha have even been UNESCO intangible cultural heritage since 2021.

Lauscha and the surrounding area have been a destination for Christmas nostalgics for decades. Even the backdrop has something fairytale-like about it – picturesque slate-grey houses nestle against the flanks of the deep Steinach Valley in the Thuringian Slate Mountains.

In the village there is a ski jump, not far away in the Thuringian Forest runs the Rennsteig, the oldest long-distance hiking trail in Germany - in winter accessible with hiking or snowshoes, or cross-country skis. Railway fans can trundle all year round in the neighboring Schwarzatal with the listed Oberweißbacher Bergbahn on a route with a 25 percent incline from Obstfelderschmiede via Lichtenhain to Cursdorf.

From the top, the distant view of the Thuringian Forest, which is often snow-covered in winter, is excellent. Nestled in the hills to the south is the toy town of Sonneberg - another Christmas-themed place.

Lauscha's main street, which has been called the Street of Peace since GDR times, is decorated with Christmas decorations all year round. A gas flame roars in almost every shop and in the two glassworks, as with Andreas Tresselt. Visitors can watch the craftsmen at work almost everywhere. "Bubbles in front of the lamp" is what this is called in technical jargon.

From the glassblowing to the final painting and decorating, everything is purely manual work, the products are protected under the name "Lauschaer Glaskunst" at the Patent and Trademark Office. Glass design and Christmas tree decorations are taught at the local glass vocational school.

A glimpse into the shop windows of Lauscha is like a trip back to childhood: you can see shiny red toadstools with white dots that used to decorate grandma's Christmas tree, or colorful glass animals - they weren't in many West German shops in the 1970s Christmas parlor?

They almost certainly came from Thuringia, because in the GDR era, Christmas tree decorations were mainly produced for export to the West. In the east, the handwork from Lauscha was Buckware, for the glassblowers their balls were like a second currency.

Then as now, the craft moves between art and chord: blowing, looking at the result in the light, turning, melting, blowing. Again and again, all year round. In order to create objects of the same size, the glass artists hold their balls between two vertical metal rods. Everything else is a matter of judgement.

For figures, on the other hand, hot glass is blown into specially made molds. These types of Christmas decorations are called “formal things”. There are apples (representing love), bears (representing strength), clowns (representing joy and tolerance). But there have long been espresso machines, eclairs, police officers, bikini bodies, boxing gloves and even bombs. Popular nostalgic forms from the early 20th century were reissued, including Kaiser Wilhelm II and zeppelins.

Two forms are evergreens: the cucumber and the bird. Whoever first discovers the cucumber in the tree on Christmas Eve can unwrap an extra gift. At least that's a custom around here. The cucumber may have been the idea of ​​a glassblower with many children who was so poor that he could only afford one gift.

Birds, on the other hand, were caught in the forest, from then on they lived in cages in the glass blowing workshop, which was mostly also the living room. Sometimes the birdie became a lifesaver: if his chirping became quieter, that was a sign of a blatant lack of oxygen - high time to open the windows to air the room!

One master who specializes in birds is Helmut Bartholmes. His workshop is in Limbach on the edge of the forest, where the Rennsteig runs between the spruce trees and where the Schwarza rises on the slope. Bartholmes offers tours at his Thuringian Christmas Glassworks and shows how hundreds of hand-blown bird shapes are stuck on the nail board to dry in what looks a bit like chicken on a skewer.

Later, his employees paint the molds by hand. In the sales room, the flock of birds then sits on the perch in a naturalistic way, clinging to it with a silver clip. Bartholmes' birds are sought after by collectors.

Every manufacturer has its speciality. Magdolna Hähnlein, for example, concentrates on decorating the balls. Your shop window shines from the outside like the shop from the inside: in silver. When there are more than seven people in the store, things get tight.

The artist sits concentrated at the table and with pointed fingers winds the so-called Leonian wires around her spheres - wavy, spiral-shaped or jagged, silver-plated. A tradition that immigrated Huguenots from Lyon brought with them. A popular Christmas trend in the 1890s was to replicate hot air balloons with gondolas made from glass balls and Leonian wirework.

You can also find out on site why glassmakers settled in Lauscha in the 16th century. The main reason: The southern Thuringian forest provided the most important raw materials - quartz sand from a quarry and potash from burned beech wood to lower the melting temperature of the quartz sand and melt the material into liquid glass.

And of course lots of wood. It has been handed down that the glassmakers Hans Greiner and Christoph Müller received permission to build and operate a village glassworks on January 10, 1597. This makes Lauscha exactly 425 years old this year.

In the early days, mainly oil lamps, slugs, wine and pharmacy glasses were produced. The glassblowers survived the Industrial Revolution, the German Empire, two world wars, the GDR with forced expropriation and collectivization and the German reunification, so far also the cheap goods from the Far East. Energy costs will be the next challenge: no glass, no gas.

A descendant of the founder in the 14th generation is Gerhard Greiner-Bär, 81 years old and working in the glass industry for decades. The glass know-how from Lauscha, he says, was responsible for many inventions - the world's first light bulb, glass marbles, micro glass fibers for filters, medical glass eyes that look deceptively real. And above all: the Christmas tree ball!

It was important to Greiner-Bär to prove that. The legend was not enough for him. It said that a poor glassblower in Lauscha couldn't hang apples or nuts in his family's Christmas tree at Christmas, so he reproduced the fruit in glass.

Greiner-Bär looked for facts, because Gablonz in today's Czech Republic also claimed to have invented the Christmas tree ball. The engineer found evidence that so-called ice cones were formed in Lauscha between 1820 and 1830 and that hollow glass beads hung on chains decorated Christmas trees.

The bellows, invented around 1820, brought more oxygen into the flame, and a higher temperature made larger molds possible. During his research in the church in neighboring Steinheid, which was built in 1836, Greiner-Bär also found a relief depicting a glass ball hanging from a pine branch. Gablonz does not have such far-reaching evidence to offer.

In the late 19th century, the baubles became a real success story: from 1867, Lauscha had its own gas works, the gas flames enabled higher temperatures and even larger Christmas tree baubles. From 1870 onwards they were mirrored on the inside with silver nitrate instead of lead, which was harmful to health, which produced a higher gloss and made the colors appear even richer on the outside.

The international breakthrough came around 1880: the American Frank Winfield Woolworth ordered large quantities of balls from Lauscha for his department stores. The glassblowers were busy. In the glassworks, but also in homework.

A photo hangs in the toy museum in Sonneberg: The youngest children lie in their cradles next to the work table, children aged five and older work 14 to 15 hours a day like adults.

Once a week, the women would pack meter-high boxes containing the precious glass on their shoulders and walk the path through the woods from Lauscha to Sonneberg with their backs bent – ​​today the glassblowers’ path is a hiking trail of around 15 kilometers. The target was the so-called publishers in Sonneberg. Sonneberg was on the trade routes to Erfurt, Nuremberg and Leipzig. The publishers took care of worldwide distribution.

Master glassblower Dietbert Bätz is one of those who now specializes in the US business. Wooden crates are stacked in one corner of his workroom, in which finished goods are sent overseas: golden panthers, pink lipsticks, plump oysters, glittering unicorns - Bätz blows the most bizarre Christmas decorations in Lauscha. Business is booming.

“In America, people sometimes have three to four trees, each four to five meters high, and they have $30,000 worth of jewelry on them,” says Bätz. They wanted stuff like that. For Asians, he has soy sauce bottles and sushi bites in the program.

But Lauscha's classics are red balls. "They never go out of style," says Steffen Flessa from the Sitzendorf Christmas station. His manufactory specializes in Christmas tree decorations made from old, restored forms.

Flessa knows all the legends and facts about Lauscha glass. There's only one question he can't answer - that of the perfect Christmas red. After all, he has balls in 80 different shades of red in his range, each more beautiful than the next.

Where is a good place to live?

Participation in the trip was supported by Thuringia Tourism. You can find our standards of transparency and journalistic independence at go2.as/independence

‹ ›
Keywords:
WeihnachtenThüringenHandwerkWeltkulturerbeImmaterielles Weltkulturerbe
Your comment has been forwarded to the administrator for approval.×
Warning! Will constitute a criminal offense, illegal, threatening, offensive, insulting and swearing, derogatory, defamatory, vulgar, pornographic, indecent, personality rights, damaging or similar nature in the nature of all kinds of financial content, legal, criminal and administrative responsibility for the content of the sender member / members are belong.
Related News