"The President of the Patriotic Movement for Safeguarding and Restoration (MPSR) assumes the functions of Head of State, Supreme Head of the National Armed Forces," says a statement entitled Fundamental Act, which completes the Constitution of Burkina, "pending the adoption of a transition charter". 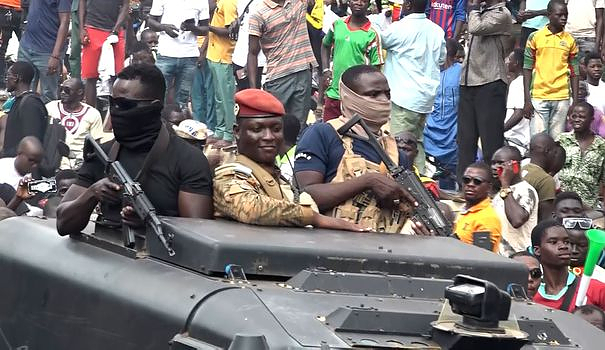 "The President of the Patriotic Movement for Safeguarding and Restoration (MPSR) assumes the functions of Head of State, Supreme Head of the National Armed Forces," says a statement entitled Fundamental Act, which completes the Constitution of Burkina, "pending the adoption of a transition charter".

This statement was read by Captain Kiswendsida Farouk Azaria Sorgho, spokesperson for the MPSR, the ruling junta, during a special broadcast on national television.

Captain Traoré assured Monday on RFI radio that he would only expedite "current affairs" until the appointment of a new civilian or military transitional president by "National Assizes" bringing together political, social forces. and civil society, which will have to meet "well before the end of the year", according to him.

On Friday, he overthrew Lieutenant-Colonel Paul-Henri Sandaogo Damiba, himself who came to power by force in January 2022 by overthrowing elected President Roch Marc Christian Kaboré.

The Act adopted on Wednesday specifies that while "awaiting the establishment of the transitional bodies", the MPSR "is the guarantor of national independence, territorial integrity, permanence and continuity of the State, respect for international treaties and agreements to which Burkina Faso is a party".

The Constitution, suspended after the putsch on Friday, has been restored and "applies with the exception of its contrary provisions" to the Fundamental Act.

Ibrahim Traoré, 34, becomes the youngest head of state in the world, ahead of Chilean Gabriel Boric, 36.

He takes the head of a state scarred by war since 2015, and partly justified his coup by blaming his predecessor Damiba for "the continuous deterioration of the security situation".

Regular attacks by armed groups affiliated with Al-Qaeda and the Islamic State (IS) group have killed thousands and displaced some two million people.

A majority of the territory escapes the control of the State, in particular on the side of the borders with Mali and Niger.

Ibrahim Traoré received on Tuesday a delegation from the Community of West African States (ECOWAS), which came to assess the situation a few days after the putsch. She left "confident", according to former Nigerien President Mahamadou Issoufou, member of the delegation and ECOWAS mediator for Burkina.

Mr. Issoufou judged that Faso had been "on the brink" after a weekend of unrest and uncertainty over the acceptance of the putsch by Lieutenant-Colonel Damiba, who initially opposed his dismissal before finally resigning and leaving the country on Sunday.

Demonstrations against France and for a strengthening of military cooperation with Russia, whose influence continues to grow in several French-speaking African countries including neighboring Mali, were also held during the weekend.

Buildings representing the interests of France, including the embassy in Ouagadougou, were attacked by the demonstrators.

Captain Traoré, at the end of the meeting with ECOWAS on Tuesday evening, had assured that Ouagadougou would continue to respect its commitments made under Mr. Damiba vis-à-vis ECOWAS, in particular on the organization of elections and a return of civilians to power no later than July 2024.