Bogota and the ELN guerrillas announce the resumption of negotiations

"The re-establishment of the dialogue process (will resume) after the first week of November," said the statement read after a meeting in Caracas between representatives of the parties. 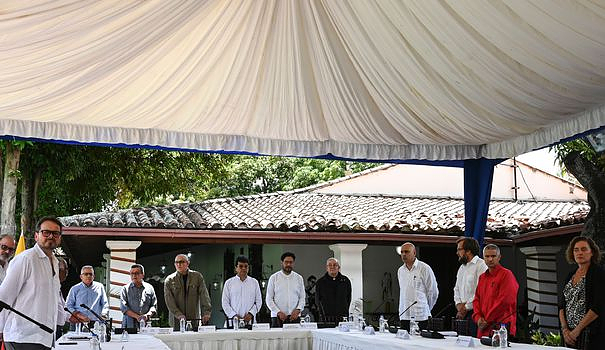 "The re-establishment of the dialogue process (will resume) after the first week of November," said the statement read after a meeting in Caracas between representatives of the parties. "When will we resume? The press release says so: after the first week of November" in "rotating places" between the guarantor countries, Venezuela, Cuba and Norway, Antonio Garcia, commander of the ELN, then told the press. .

The talks will be held in "rotating locations" between the guarantor countries: Venezuela, Cuba and Norway.

Guevarist-inspired, the ELN is the last constituted guerrilla still active in Colombia, while the Revolutionary Armed Forces of Colombia (FARC) signed a peace agreement in 2016.

ELN representatives had been in Cuba for four years, where the previous round of negotiations was held, suspended in 2019 by the former Colombian president, the conservative Ivan Duque, after an attack on a police school that left 22 dead, besides the assailant.

After being under international arrest warrants, they were able to leave the Caribbean island on Sunday as part of new peace negotiations promised by the new Colombian President Gustavo Petro.

Invested in August, Mr. Petro, the first left-wing president and a former guerrilla himself, is working on a "total peace" plan which must put an end to all violence in his country after more than 50 years of incessant fighting.

In particular, he affirmed his desire to negotiate with the ELN but also with the dissidents of the ex-FARC who reject the 2016 peace agreement, as well as to discuss with the gangs of drug traffickers their surrender to justice.

The largest splinter faction of the FARC announced at the end of September the suspension of its attacks against the security forces in order to achieve a bilateral ceasefire.

According to the authorities, the ELN currently has some 2,500 members, compared to around 1,800 at the time of the negotiations. It is mainly present in the Pacific region and on the border with Venezuela, which is 2,200 kilometers long.

Since Mr. Petro came to power, Colombia and Venezuela have resumed their diplomatic relations broken since 2019 following Mr. Duque's decision not to recognize the re-election of Mr. Maduro as head of Venezuela during a disputed elections.